Do helmets really help reduce my risk of a head injury?

The message that Mikael Colville-Andersen offered to his audience at the TEDx conference in Copenhagen last November isn't what you'd expect from a cycling advocate who travels the world promoting urban bike use.

"There are actually scientific studies that show that your risk of brain injuries is higher when you're wearing a helmet, and that you have a 14-per-cent greater chance of getting into an accident with a helmet on," he said. "These are not things that we hear about too often."

With hockey head shots in the news, and revelations that ex-players like Bob Probert suffered from a form of brain damage called chronic traumatic encephalopathy, head protection is a hot topic. But Mr. Colville-Andersen's controversial anti-helmet crusade offers a reminder that technology and equipment, on their own, can't keep us safe. We have to consider the underlying factors that influence our risk-taking decisions - and those of the people around us.

Bike helmets have been a flashpoint of scientific controversy since the 1980s. Mr. Colville-Andersen's assertions notwithstanding, few experts doubt that you're better off with a helmet if you're in a bike accident. But helmet laws and public safety campaigns promoting helmet use also discourage people from cycling in the first place, he argues, leaving the remaining cyclists more vulnerable to cars. This is sometimes dubbed the "safety in numbers" argument.

Ontario's under-18 helmet law, passed in 1995, offered an opportunity to test this claim. In a series of studies over the past two decades, pediatrics researcher Patricia Parkin and her colleagues at the University of Toronto and the Hospital for Sick Children found that bicycle fatalities among children decreased after the legislation, while fatalities among adults - who weren't covered by the new law - remained unchanged. The number of children cycling past designated observation points in Toronto between 1993 and 1999 was unaffected by the helmet law, suggesting that the decrease in deaths wasn't simply because fewer children were cycling, Dr. Parkin says.

The basis for Mr. Colville-Andersen's claim that helmets actually increase injuries stems from "risk homeostasis theory" - the idea that everyone has a preset level of risk tolerance, so that when you decrease risk by wearing a helmet or buckling up a seat belt, you unconsciously compensate by biking or driving more dangerously.

A Norwegian study that will be published later this year in the journal Risk Analysis investigated this effect by asking 35 cyclists to bike down a steep hill with and without a helmet. Habitual helmet-wearers did slow down when they were asked to remove their helmets, but non-helmet wearers didn't speed up at all when they donned a helmet.

This ambiguous result is typical of risk homeostasis studies. In an earlier paper, McGill University researchers interviewed 394 children who'd sustained injuries in activities such as cycling, hockey and skiing, slightly more than half of whom had used protective equipment. They concluded that risk homeostasis "does not seem to be a significant reality," at least among children.

Still, it's precisely this effect that is often blamed for rising rates of head injury in hockey and football. Cocooned in a heavy layer of equipment, today's players are willing to dish out - and take - heavier, more aggressive hits. So while football players are rushing to embrace high-tech helmets such as the Riddell Revolution line, which promise to reduce concussions, some sports are pursuing different approaches. Helmets are actually banned in women's lacrosse, and efforts to introduce more head protection have met with stiff resistance from players and coaches who fear that the game would become more violent as a result.

Rugby players are permitted to wear soft headgear and mouth guards. While the gear is effective in reducing mouth, face and scalp injuries, it does little or nothing to prevent neurological injuries like concussions, according to a recent review by Michael Cusimano, a neurosurgeon at St. Michael's Hospital in Toronto. "But other strategies, such as education and rule changes, have been shown to be effective," Dr. Cusimano points out.

Education and rule changes, whether on the rugby field, hockey rink or in cycling lanes, are time-consuming and difficult to implement. But the alternative is to assume that helmets can solve all our problems - a tendency, Mr. Colville-Andersen points out, that reaches its logical conclusion with the recently developed Thudguard "infant safety hat," designed for "learning to walk in a world of hard surfaces."

The key difference between cyclists and rubgy or hockey players, of course, is the presence of a powerful external agent: cars. The wise cyclist may join Mr. Colville-Andersen's crusade to make urban cycling so widely accepted that helmets seem unnecessary - but he or she will still wear one just in case.

It took my father a year to get over his hockey concussion
March 9, 2011 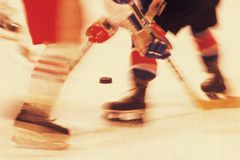 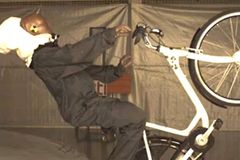