On a Saturday morning in a heritage building on West Hastings Street, the clash of metal fills the air.

They may be dressed in regular gym clothes, but the dozen or so students here are thrusting, parrying and practising their punta falsos and dui tempis.

Since Devon Boorman opened the Academie Duello Centre for Swordplay in Vancouver seven years ago, he's taught actors, fans of medieval weapons as well as bankers and office workers. Like an action-oriented Pilates class, the Western martial art of swordplay requires the grace of a ballet dancer with the strength of a warrior. It's not about building muscle mass, as in weight-lifting, but about building plyometric - that is, explosive - strength.

But last fall, he added a new hybrid to his lineup.

The 90-minute SwordFit workout at Academie Duello is designed to be a mix of technical and cross-training, and features two instructors - one for swordplay and one for general fitness. Meghan O'Connell, the fitness instructor, has a background in boxing and has based many of the exercises on boxing training circuits.

The first 10 minutes consist of an aerobic warm-up - running in laps around the sprung studio floor or skipping and jumping. This is followed by 20 minutes of technical swordplay instruction, and two 20-minute circuits that combine swordplay with complementary weight-lifting and other exercises. This is followed by 10 minutes of intensive calisthenics and a final 10 minutes of stretching. Students train with real double-handed swords - such as the spadone and the spada a dui mani - rather than the lightweight variety used in Olympic fencing.

SwordFit not only offers an introduction to the sport, it's also an excellent workout.

"It's really improved my reflexes and my hand-eye co-ordination," says Chili Thom, a 34-year-old DJ and filmmaker who travels from Whistler, B.C., to take classes. Mr. Thom is here with his girlfriend, 22-year-old Allie Thomas, a personal trainer. The two are sparring and working on push/pull exercises to build strength and resistance.

"I lost 10 pounds of fat after the first six weeks," says James Michek, a 48-year-old avionics technician who looks like he's traded the fat for toned muscle. He tightens up his leather armour. Underneath, he's chosen to wear a 25-pound chain mail shirt, "for extra resistance."

In addition to the cool accessories (the location sells gloves, shields and armour), Mr. Michek cites the competitive aspect and the fact that the sport/art requires intellectual as well as social engagement.

SwordFit is a "partnering workout," says Mr. Boorman, 32. It requires you to connect with other people rather than "zone out" on, say, a solitary StairMaster.

Today's lesson is focused on counterattack, or counterthrusting, so the calisthenics and weight-lifting are designed to focus on shoulder and arm strength. Greg Reimer, the swordplay instructor - a graphic designer and father of two who discovered the sport when Academie Duello staged a demo - explains the art of prima tempo (to strike back) and dui tempi (to block and strike) to a rapt class. (Many of the swordplay terms are in Italian, since much of the technique is based on Italian Renaissance masters.)

He steps toward two intermediate students who have locked longswords in a classic bind and tells one how to gracefully manoeuvre out of the position with a punta falso - a move in which you turn the sword, directing it toward the opponent while avoiding their attack.

"Swordplay makes you feel graceful and powerful at the same time - like dance," Mr. Boorman says. It strengthens arms and shoulders, and tones the core. "If you relax your core," he says, "your posture will crumple and you will lose your balance."

Ms. Thomas also enjoys the couples aspect to the class. "I like the fact that we can take turns being the attacker and the defender," she says. "It really gets a lot of frustration out."

Mr. Thom agrees. "There's something so visceral and revitalizing about the clanging of the swords."

Pump up your relationship with a couples workout
February 13, 2011 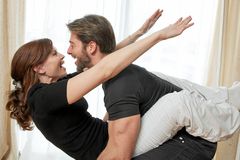 Nasty, brutish and short - but a workout that works
January 2, 2011