The fountain of youth will not be located in 2016, and the secret key to ultimate fitness will (contrary to what you may have heard on the Internet) remain a secret.

But health researchers will keep plugging away at the gaps in our knowledge, and their progress will help us make better decisions. Here are five topics ripe for reappraisal in the coming year.

For endurance athletes, carbohydrates have been king for half a century, since the beginnings of modern sports nutrition. In the past few years, however, a growing band of ultra-endurance athletes – along with a few scientists – have begun to argue that you can teach the human body to instead rely on its copious fat stores by consistently eating a diet that's very high in fat.

These claims remain hotly disputed, supported mostly by anecdote rather than science. But scientists are finally taking notice, and several studies are now under way to test the merit of the idea.

Don't expect a dramatic overhaul of sports nutrition guidelines: There's a reason virtually all Olympic endurance athletes inhale carbs like oxygen. But new results may confirm that the body is capable of burning more fat than previously thought.

The holy grail? The possibility of using brief periods of fat-fuelled training to enhance fat burning without compromising the ability to use carbohydrates, too.

A decade ago, a flurry of books, including Malcolm Gladwell's Outliers, argued that "talent," rather than being a static trait that you're born with, is something you can develop. The result was a new round of debate about nature and nurture that focused attention on research about how we become experts in domains such as sports and music. These days, few people would argue that stars are entirely born or entirely made, thanks to accumulating evidence that the truth lies somewhere in the middle.

Instead of arguing about what talent is, researchers are now focusing on how to identify and develop it. At the epicentre of this debate is early specialization in youth sports. Is enrolling your toddler in year-round soccer the best or worst thing you can do for her (or your) professional aspirations? We'll be hearing more about the evidence on either side in the coming year.

The American College of Sports Medicine's prediction of fitness trends for 2016 has an interesting juxtaposition. At the top of its list is wearable technology, including "fitness trackers, smart watches, heart rate monitors, and GPS tracking devices." The runner-up, meanwhile, is "getting back to the basics" with body-weight training using minimal equipment.

So which one captures the zeitgeist best? To some extent, the seemingly contradictory trends simply appeal to different groups of people. But the underlying question is whether one is more effective.

Fitness technology is advancing more quickly than our knowledge about what it's useful for. The challenge for researchers is to find a way to harness our new-found ability to measure our every twitch so that it makes people measurably fitter and healthier.

What is a woman?

In July, the Switzerland-based Court of Arbitration for Sport ruled that Indian sprinter Dutee Chand should be allowed to compete, despite having natural testosterone levels higher than the maximum allowed by international track-and-field rules for women's competition.

The court's ruling caps growing recognition that gender exists along a spectrum, rather than a simple black-and-white dichotomy between men and women. That makes formulating clear and fair rules for who is allowed to compete as a woman difficult, if not impossible.

In a word, the Olympics. Will Chand's case be rare or unique, like the controversial participation of double-amputee Oscar Pistorius in the 2012 Olympics? Or will the controversy become a significant storyline in Rio, as other athletes with intersex conditions are permitted to stop taking hormone-suppression therapy?

Competitive sports used to be the near-exclusive domain of the young. These days, a growing population of masters athletes are training hard and competing at all ages, and they're rewriting our views about how much physical decline is really inevitable.

But can the body really tolerate decade after decade of vigorous training? Some researchers believe that too much exercise over long periods of time can wear down the heart and cardiovascular system, counteracting some of the usual benefits of exercise.

Researchers around the world are putting masters athletes under the microscope to settle these questions. At the University of Toronto, for example, nearly 200 participants have undergone a series of rigorous tests, including exercising with a catheter inserted into their heart to take pictures. The results will bring much-needed data to a debate that is currently dominated by anecdotes and assumptions.

How guide runner Joshua Karanja stays on target during a race
May 16, 2018 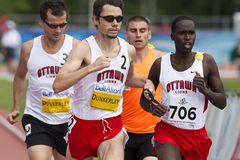 How triathlete Trish McAlaster used fitness to turn her life around after a bad year
May 16, 2018 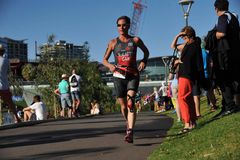