The training secret that propels top distance runners like Cam Levins of Campbell River, B.C., is very simple: They run a lot. Levins, for example, earned a spot at last summer's Olympics (and cult-hero status among running fans) by running three times a day, up to 300 kilometres a week, during his collegiate career at Southern Utah University.

With an extreme regimen like that, other forms of supplementary training tend to take a back seat.

"I didn't do much weight training in college," Levins, 24, explained in an interview. "Just not enough time in the day to do much of it, and I would do mileage instead."

Since graduating last year, though, Levins has shifted his priorities to make time for strength training – for good reason. Recent studies have confirmed what many coaches have long suspected about the links between strength training and running economy, a measure of how much energy it takes to run at a given speed. Pumping iron will never replace the benefits of pounding the pavement, but a modest dose of the right kind of strength training can pay big dividends.

The traditional approach to strength training for endurance athletes has been to focus on a high number of repetitions with relatively light weights – three sets of 10 to 15 reps for each exercise, for example. The idea is to build strength without packing on too much muscle, a "problem" that is purely hypothetical for the vast majority of people.

Instead, it turns out that the exact opposite approach may produce better results. Training with heavy weights or explosive motions, such as leaping, seems to have less in common with the demands of running, but these techniques are extremely effective at improving the communication between your brain and your muscles.

Such "neuromuscular" adaptations allow you to recruit more muscle fibres with each contraction, and ultimately translate into more efficient running.

Researchers at the University of Rome tested this idea in a study published in this month's issue of The Journal of Strength and Conditioning Research. They recruited 16 runners, with an average age of 44 who were preparing for a marathon, and divided them into three groups. In addition to their regular running, one group added a six-week, twice-weekly traditional strength-training program consisting of three sets of 10 reps of a variety of upper- and lower-body exercises, using a weight equal to about 70 per cent of their one-rep max. The second group did a heavy-weight protocol, doing four sets of three to four reps with 85 to 90 per cent of one-rep max. The third group did no weights.

After six weeks, only the heavy-weights group had made any improvements: 16 per cent in their one-rep max on the leg-press machine and 6 per cent in running economy. Interestingly, these gains came without any significant increase in muscle mass, supporting the hypothesis that the primary benefits were neuromuscular.

Another study, due to be published later this year in the same journal, found that runners can also benefit from "plyometric" training, which uses explosive leaps and jumps to stimulate neuromuscular pathways. Researchers in Chile and Spain assigned 36 runners to either a six-week plyometric training program (60 drop jumps twice a week) or a control group; by the end of the study, the plyometric group had improved their time in a 2.4-kilometre run by 3.9 per cent, while also improving sprint and jump performance.

While plyometrics are usually considered an advanced form of training, there's no reason that recreational runners can't use them too, as long as they build up gradually, says Dr. Mikel Izquierdo of the Public University of Navarra in Spain, the lead author of the study.

In fact, recreational runners may have even more to gain since they're likely weaker to start, he says.

There's still no getting away from the fact that the best way to get better at running is to run more. But these results suggest that even a short, six-week bout of strength training, inserted a few times a year leading up to a goal race, can give your running a significant jolt. It's also a great way to build resistance to injuries and fight off the muscle loss associated with aging – and it's a lot easier than running 300 kilometres a week.

Dr. Maria Francesca Piacentini and her colleagues at the University of Rome used the following strength-training routine to boost running economy among master marathon runners: Lift twice-weekly for six weeks. Do four sets of three to four reps of each exercise: half-squat with arm weights, leg press, lunges with arm weights, bench press, lat pulldown (lift 85 to 90 per cent of your estimated one-rep max). Rest three to four minutes between reps.

Why being asked to take the stairs is better for your health
August 4, 2013 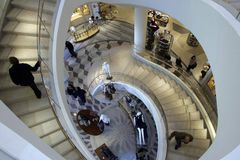 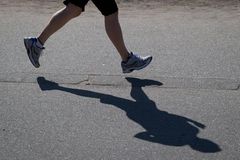 A primer on the highs and lows of altitude training
July 5, 2013 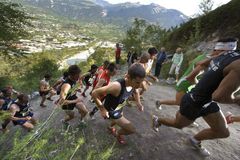