There are necessary evils in all lines of work. For me – and for lots of other trainers I know – vacations are at the top of this list of unavoidable inconveniences. This isn't because I'm a joyless taskmaster who lives to lift; it's because consistency is the No. 1 factor in achieving fitness goals and nothing slams the brakes on the slow train to six-pack city like a week spent drinking Mai Tais on the beach.

Of course I would never dream of advising anyone to forgo a vacation in favour of spending time with me in a sweaty gym, but I do get a little nervous whenever a client shares their holiday plans. Rarely does the itinerary include dedicated time for training; and even when I provide a simple program to help keep their routine in check while away, they always return with a guilty face and a list of excuses. That is if they return at all. Yes, the Bermuda Triangle swallows more than planes and ships; the average person's motivation to lift weights also disappears the second they take off for an exotic locale.

We fitness pros aren't immune from succumbing to this phenomenon either. The fact is, I've never had a good workout while in vacation mode. I chalk this up to the chronic case of joyful laziness that has always dogged me whenever I deviate from established routines, as well as an acute case of fear of missing out that seems to arise only on holidays. Being under the constant spell of these two opposing forces – one that commands me to sleep until noon, the other that leaves me racked with guilt unless I see and do as much as possible every day – leaves me with little mental energy for the gym.

Thankfully, there exists a cure for this self-diagnosed malady: high-intensity interval training (HIIT). Don't let the fancy acronym fool you; HIIT is a simple protocol that calls for bursts of near-maximal work broken up by brief periods of rest (think a series of explosive 100-metre sprints rather than a plodding 5K run). With HIIT, you burn more calories in less time and you gain most, if not all, of the cardiovascular benefits of traditional aerobic exercise, making it perfect for athletes-in-training, busy professionals and lazy vacationers alike.

HIIT isn't new. Variations have been practised since at least the dawn of the 20th century. What is new, however, is the research on the subject being conducted by Dr. Martin Gibala and his team at McMaster University's kinesiology department, research that proves it's how hard you exercise that matters most, not how long.

It's with this in mind that I packed a copy of Gibala's new book, The One-Minute Workout, when my wife and I took off to Winnipeg for a week on Valentine's Day (shout-out to Winnipeg! One great city indeed). The book collects decades of research on HIIT and delivers it in layman's terms so you can read it in bed while nursing a hangover (I was on vacation!). Also included: a series of interval-based programs that just about anyone can incorporate into their schedule, though it must be pointed out that exactly zero of these programs are one-minute long. The title of the book refers to the total time spent exerting effort after warming up and in between rest periods.

Inspired by Gibala, I put together the following HIIT workout to keep my training on track without having to worry about interfering with our vacation plans. Lucky for me, the friends we were staying with had all the equipment I would need in their makeshift basement gym: a beat-up heavy bag, a chin-up bar and a 35-pound kettlebell.

Move directly from one exercise to the next, resting as little as possible along the way. Once you finish the circuit, rest for a minute or two, then repeat as often as you wish. Don't have a kettlebell? Try jump squats or burpees. Can't do push-ups or chin-ups? Don't! Use that interval as a rest period, or substitute whatever exercise you want.

Kettlebells – essentially a cannonball with a handle – are ideal for HIIT because they're so versatile. They can be pressed, pulled and squatted, but it's when they're swung back and forth between the legs, pendulum-style, that their true value becomes clear. Thirty seconds of kettlebell swings is enough to leave most folks gasping for air, plus they do a hell of a job building the back, butt and hamstrings. The only downside? The proper technique can be a little tricky for the uninitiated and YouTube is littered with awful tutorials. Don't put your spinal health in the hands of amateurs. 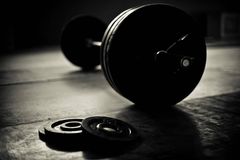 How to build two unsung heroes of a well-rounded physique
July 9, 2020
Follow us on Twitter @globeandmail Opens in a new window
Report an error Editorial code of conduct
Due to technical reasons, we have temporarily removed commenting from our articles. We hope to have this fixed soon. Thank you for your patience. If you are looking to give feedback on our new site, please send it along to feedback@globeandmail.com. If you want to write a letter to the editor, please forward to letters@globeandmail.com.
Comments