The question
Will taking a class or finding training partners help me keep my exercise resolutions this year?

The answer
Consider the similarities between a modern exercise class and an ancient religious rite - the wise leader guiding the group through a series of ritualized movements, in perfect synchronization. If you're struggling to keep faith with your fitness goals, this apparent coincidence might offer a solution.

New research suggests that group exercise unleashes a flood of chemicals in the brain, triggering the same responses that have made collective activities from dancing and laughter to religion itself such enduring aspects of human culture. For some (but not all) people, finding workout buddies could help turn fitness into a pleasant addiction.

In a forthcoming issue of Biology Letters, researchers from Oxford's Institute of Cognitive and Evolutionary Anthropology report on a study of the university's famed rowing team. The crew was divided into teams of six, each of which performed a series of identical workouts on rowing machines. The only variable was whether the workouts were performed alone, or in teams with the six machines synchronized by the crew's coxswain.

After each workout, a blood-pressure cuff was tightened around one arm of each subject until he reported pain, an indirect method of measuring endorphin levels in the brain. Endorphins - the same chemicals that stimulate "runner's high" - produce a mild opiate high and create a sense of well-being as well as blocking pain. Sure enough, the rowers' pain threshold was consistently twice as high after exercising with their teammates compared to exercising alone, even though the intensity of the workouts was identical.

So where does this magic come from? The endorphin surges can likely be traced back to the evolutionary benefits of group bonding, the researchers suggest. Earlier studies have suggested that synchronized physical activity elevates mood and is associated with greater altruism.

But synchronization is probably not the only factor involved, notes lead author Emma Cohen, who is now at the Max Planck Institute for Evolutionary Anthropology in Germany.

"We also suspect that shared goals - ultimate goals, like winning the big race, and proximate goals, like endeavouring to row together in synch - are at least part of the trigger," she said by e-mail. She will explore this question further by studying religious drummers in Brazil this spring, while her former colleagues conduct further studies with the Oxford rowing crew.

Endorphins are produced by virtually any vigorous physical activity, but group work appears to enhance the effect dramatically - and there's plenty of evidence that exercise classes meet that description. In a series of studies stretching back more than a decade, University of Saskatchewan professor Kevin Spink has found those who feel a greater sense of "groupness" and cohesion within an exercise class are more punctual, have better attendance and even work harder.

Of course, not all collections of individuals qualify as a group. Dr. Spink and other researchers have identified factors that make some crowds "groupier" than others, such as the existence of group norms. For example, the shift in the past decade from sign-up exercise classes to drop-in classes has made it more difficult to build cohesion in these groups.

Still, it appears that the most important factor is what's in your head, even for drop-in classes. "As long as I perceive the people I'm exercising with as a group, my adherence is way better," he says.

There is an important caveat regarding individual preferences. About a third of people enjoy exercising in groups, another third prefers exercising alone, while the remaining third is indifferent, Dr. Spink notes. For those who are happy exercising alone, there's no reason to join a group.

For everyone else, exercising with partners or in groups has all sorts of benefits that have nothing to do with neuroscience, from the simple act of committing to meet someone to the pleasures of gossiping during a workout. But the endorphin findings help explain how exercise is transformed from a chore to a lifelong habit, and indeed a pleasure, for some people - and suggest one way of getting there.

Alex Hutchinson blogs about research on exercise and athletic performance at www.SweatScience.com. 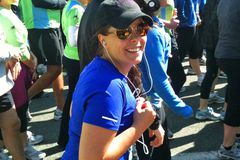