Now that we've accepted the surprising truth about sedentary behaviour – that sitting at a desk all day wreaks havoc on your health, no matter how much you exercise before or after work – the standing desk is having a moment. Desk jockeys everywhere are rising up.

The cashiers of the world, meanwhile, must be scratching their heads.

"Ask anyone who works in a shop whether they feel good standing all day, or whether they need to periodically sit," says Alan Hedge, who directs the Human Factors and Ergonomics program at Cornell University in Ithaca, N.Y.

Indeed, prolonged standing has been linked to a long list of health problems over the years: most commonly varicose veins, but also night cramps, clogged arteries, back pain and even (according to one study) "spontaneous abortions" – enough to make you think twice before throwing away your chair. But striking the right balance in your cubicle isn't necessarily about the furniture, researchers say – it's about how you use it.

The surge of interest in standing desks – not to mention treadmill desks, vertically adjustable desks, and all sorts of other variations ranging from ergonomic masterpieces to makeshift DIY contraptions – has been spurred by the finding that too much sitting is associated with a higher risk of conditions like cancer, diabetes and cardiovascular disease. When you sit still, levels of an enzyme that draws fat from the bloodstream start to drop, leaving the fat to wreak havoc elsewhere in the body.

A few recent pilot studies have offered encouraging data on the use of standing desks. For example, a study of Grade 1 students in Texas, published in the American Journal of Public Health, found that kids chose to stand rather than sit at adjustable desks a surprising 91 per cent of the time, and burned an extra 10 calories an hour while doing so.

Studies in adults have produced more mixed results. Office workers seem to be significantly less enthusiastic about standing up on the job. But the real risk factor for health problems is actually neither sitting nor standing, Dr. Hedge points out. It's the lack of motion. Whichever position you adopt at work, if you haven't moved after a few hours, that's bad news.

For people using standing desks, that means it's a good idea to have a chair at the appropriate height and a footrest under the table, so that you can sit when you need a break. Better yet, choose an adjustable desk than can toggle between sitting and standing height.

Studies have shown that these desks can help reduce back pain, according to Jack Callaghan, a professor of spine biomechanics and injury prevention at the University of Waterloo. But they're not perfect: If the keyboard and monitor are optimized for your seated position, then they'll be imperfectly aligned when you stand up, leaving you vulnerable to hand, wrist and neck problems.

To combat this, Dr. Callaghan suggests dividing your work so that you generally perform some tasks while sitting and others while standing. For example, if you do most of your data entry and word processing while sitting, but stand for phone calls and meetings, then you can leave your computer optimized for the seated position with less risk of developing injuries when you switch to the standing position for the less computer-intensive activities.

Another option is simply to switch positions frequently, well before discomfort begins. As a starting point, Dr. Callaghan suggests standing for 15 minutes and sitting for 45 minutes of every hour, then fine-tuning the schedule based on your individual preferences.

Dr. Hedge also advocates frequent movement as the best approach, though he remains skeptical about the benefits of adjustable desks. "The furniture industry is promoting sit-stand like crazy because these are more expensive products," he points out.

Instead, he recommends simply standing and stretching for as little as 20 seconds every 20 minutes, and taking a break of at least two to three minutes every hour in which you move around more vigorously. Remembering to take all these little breaks is an adjustment that will require considerable discipline – but it's free.

Alex Hutchinson blogs about research on exercise at sweatscience.com . His new book – Which Comes First, Cardio or Weights? – is now available.

Is your office chair killing you?
December 4, 2011 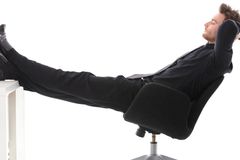 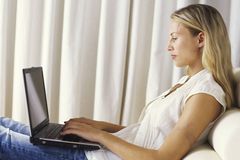 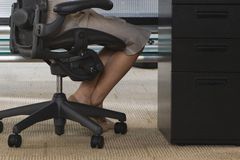