Sitting behind the wheel on a busy highway is an unlikely place to find inner peace.

But far from closing her eyes and zoning out, Janet Martin, an Oakville, Ont., executive coach and counsellor, uses her commute to Toronto to do a quick, micro-meditation.

As the CN Tower comes into view, she takes a few measured breaths to get rid of busy thoughts and refocuses her attention. "When I see that CN Tower, it's just a reminder to me to come back to the present, to the traffic, to the sounds, to what's happening around me," Ms. Martin says. The mini-meditation not only helps reduce overall stress, it makes her a more attentive driver, she says.

She peppers her days with similar brief meditations to relax and attain clarity of mind. "People say crazy, cliché things like 'it's changed my life,' but it does change your life over time."

Finding the time and an isolated place to delve deeply into the increasingly popular practice can be difficult. So, those wanting to squeeze calmness into their hectic schedules are turning to micro-meditation – short bursts of meditation incorporated throughout the day. And a growing number of how-to books, mobile apps and online videos are promoting micro-meditation, encouraging people to practise in grocery-store lineups, in taxicabs, or at their desks.

But is it really possible to achieve self-awareness and a clear mind in 30 seconds or less?

In recent years, research has revealed that meditation can actually rewire the brain and generally improve health, increasing one's mental acuity, reducing blood pressure and even improving the immune system. However, science has yet to determine how much meditation is optimal, and what length and frequency of practice is required to achieve results.

Zoran Josipovic, a neuroscientist at New York University, studies the brains of Buddhist monks, using functional magnetic resonance imaging (fMRI) technology to explore how meditation changes the brain's networks. His subjects have anywhere between eight and 30 years of experience, meditating between half an hour to three hours a day, and going to annual retreats where they practise up to 12 hours daily. Micro-meditation, seized here and there amid the frenzy of modern life, seems paltry in comparison.

Dr. Josipovic says micro-meditation is likely more effective if you already know how to meditate.

"Past [a]certain point, a mere recollecting for even a moment, is enough to 'reattune,' as the change in one's awareness and in one's way of being becomes more or less [a]permanent feature of one's makeup," he said in an e-mail. But, he added: "This usually takes some years of practice."

Mark Thornton, a former JP Morgan executive who now teaches meditation to corporate leaders, believes the effects of meditation are cumulative. He recalls that while entrenched in his financial services job, he rarely had five minutes to spare for his girlfriend, let alone to sit down for a formal meditation. Discovering that he could break up a solid session into multiple micro-meditations – and still feel the benefits – was a revelation.

"I was able to achieve states of expansion and calm and oneness and consciousness and openness that was as profound as if I had been meditating in a cave in the Himalayas," says Mr. Thornton, who's based in Los Angeles. "Finding these micro-breaks throughout the day, for cumulatively up to an hour a day, that's the magic."

Mr. Thornton's approach to meditation has become so popular that Wall Street leaders and such esteemed institutions as Harvard Law School and the Wharton School of Business at University of Pennsylvania regularly seek his instruction. He has even been invited by the U.S. army to teach his techniques at Fort Hood.

For these students, the scarcest resource is time, he says. "If people don't have the time, there's no need to feel bad. There's tons of practices you can do ... any time, anywhere."

Among those who have studied with him is Manoo Halati, a credit derivative broker in New York. Mr. Halati says he tries to do a formal, 20-minute stretch of meditation three times a week, but he doesn't always have time. To make up for it, he does micro-meditations whenever he feels the urge, repeating a simple Sanskrit mantra or focusing on deep breaths while on the subway, or in the quite moments while tucking his son into bed.

"It has a similar effect," he says, although the longer, formal meditations make him feel calmer. "Maybe because [micro-meditations]are shorter, or it's easier to get distracted, it makes it more difficult."

Mr. Thornton, however, says the more frequently one practises, the easier and more beneficial meditation becomes.

In Toronto, Maria Gonzalez, founder and president of Argonauta Strategic Alliances Consulting, who teaches meditation to business leaders, emphasizes the importance of practising micro-mediation in tandem with longer sessions of at least 10 minutes.

Doing micro-meditation without longer meditation is like leading an active life (walking instead of driving or taking the stairs instead of the elevator) without actually working out, she says; it's better than nothing. "But in terms of getting into shape, that's not going to do it," she says, explaining that formal meditations are necessary to achieving profound and long-term results.

Beyond managing stress and training your brain to be more attentive, there's another compelling reason to incorporate micromeditations throughout the day. Most people, particularly those untrained in meditation, go through life missing out on much of what's going on around them, Ms. Gonzalez says. 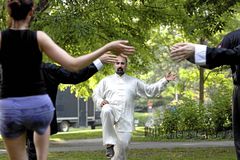 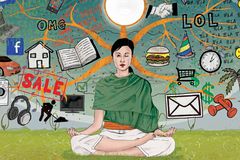