Krista DuChene was already the second-fastest female marathoner in Canadian history when she fractured her thigh bone, a few hundred metres from the finish line of the 2014 Canadian Half-Marathon Championships in Montreal.

After hobbling to the finish, she was rushed to hospital for emergency surgery. She left with a plate and three screws in her left leg – and big question marks surrounding her hopes of competing in the 2016 Olympics. After all, it had taken years of hard training to get her marathon time down to 2:28:32, in her 10th attempt at the distance. How quickly could she return to form?

DuChene, a 38-year-old mother of three from Brantford, Ont., already had the experience of coming back from prolonged hiatuses after her pregnancies, so she had discovered an essential law of training: Once you've reached a certain level of fitness, it's easier to return to that level than it was to get there in the first place. This muscle memory is hardwired into our muscle cells, according to a series of recent studies – which should encourage avid exercisers to incorporate periods of recovery into their training, without worrying that they'll have to restart from scratch.

In 2010, researchers at the University of Oslo suggested muscle memory could result from the peculiar properties of muscle cell nuclei, the location where most of the cell's genetic instructions are stored. While most cells in the body have just one nucleus each, muscle cells are so big that they have multiple nuclei.

The initial experiments were on mice and rats, but researchers estimate new muscle cell nuclei in humans have a half-life of at least 15 years, based on monitoring radioactive isotopes left over from above-ground nuclear testing, Dr. Kristian Gundersen, the lead author of the study, explained in an e-mail. "It's possible that they are more or less permanent once they are formed."

While that's good news from a fitness perspective, it also means that athletes who take performance-enhancing drugs may still have an unfair advantage even after serving a multiyear suspension. A follow-up study by Gunderson and his colleagues found that mice that had been given testosterone while training three months earlier still had 28 per cent more muscle-cell nuclei, and were able to gain muscle far more rapidly than control mice.

Gunderson and his colleagues also note the ability to generate new nuclei appears to decline with age. That suggests that getting as fit as you can while young will provide long lasting benefits as you age, making your muscles more responsive to training.

Muscle size isn't the only important training response. Endurance depends more on adaptations such as increased mitochondria, the cellular powerhouses that convert energy from food into a form that fuels efficient muscle contractions. At the annual meeting of the American College of Sports Medicine last month in San Diego, researchers from Temple University, led by Hojun Lee, presented preliminary results suggesting that, like muscle size, mitochondrial adaptations may also be influenced by the presence of additional nuclei.

As Lee explained, even though the mitochondria you gain in an initial bout of training gradually disappear when you stop, the genes that control the formation of new mitochondria are contained within the extra nuclei, which stick around indefinitely. So when someone such as DuChene starts training again after a long break, her muscle cells are already primed to begin producing more mitochondria.

While nobody hopes for a fractured femur, DuChene has come to see that breaks from her usual training routine have important benefits in allowing her body and mind to recover, and are less disruptive than you might expect. That's a lesson many of us neglect, either repeating the same training routine 52 weeks a year or achieving one fitness goal and launching straight into the next without a pause.

In the end, even DuChene's most optimistic predictions turned out to be not optimistic enough. In April, less than a year after her fracture, she ran 2:29:38 at the Rotterdam Marathon, her second-best time ever – and 12 seconds faster than the Canadian qualifying standard for next year's Olympics. 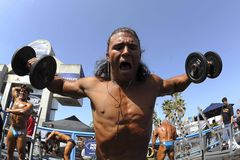 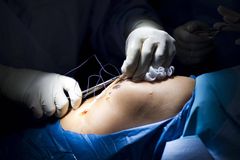 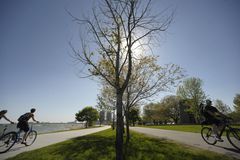