When BBC journalist Dr. Michael Mosley slogged through four weeks of workouts under the guidance of researchers at the University of Birmingham, he expected to get fitter.

Instead, as he reported in a 2012 documentary called The Truth About Exercise, his aerobic fitness didn't budge.

"It turns out that the genetic test they had done on me had suggested I was a non-responder and however much exercise I had done, and of whatever form, my aerobic fitness would not have improved," he explained.

Mosley's documentary has been viewed by more than 20 million people around the world since its release, and it has helped launch the concept of exercise "non-responders" into the public consciousness. The idea makes intuitive sense to everyone who has sweated through week after week of workouts without seeing any tangible gains – but a new study from Queen's University raises the question of whether "non-response" just means you need to push harder.

As unfair as it may seem, it's clear that we all respond differently to exercise. Back in the 1980s, Dr. Claude Bouchard of Laval University launched a series of groundbreaking experiments showing that volunteers who followed identical and rigorously controlled exercise programs for 20 weeks saw vastly different rates of improvement – and those outcomes tended to cluster within families, suggesting that genetics explained at least some of the variation.

It's now widely accepted that some people respond more strongly or more rapidly than others, but the idea that some people don't respond at all has remained more controversial. "I just never bought it," says Dr. Michael Joyner of the Mayo Clinic in Minnesota, who in 2013 co-authored a review in the journal PLOS ONE arguing that exercise programs that pushed subjects to higher levels of intensity would likely eliminate non-response.

That's exactly what Dr. Robert Ross and his colleagues in the School of Kinesiology and Health Studies at Queen's University found in a recent study published in the Mayo Clinic Proceedings. They compared the results of three different 24-week exercise programs on 121 sedentary, obese adults.

One group did a "low-amount, low-intensity" workout five times a week, walking on a treadmill for about 30 minutes a workout to meet the recommended health guidelines of 150 minutes of moderate exercise a week.

The second group did "high-amount, low-intensity" workouts that were about twice as long at the same level of effort.

The third group, "high-amount, high-intensity," spent about 40 minutes a workout walking more briskly to reach 75 per cent of their maximal oxygen uptake – an intensity where talking becomes difficult, which people typically describe as feeling "hard" – while burning the same number of total calories as the second group.

The researchers measured aerobic fitness every four weeks, and saw the number of non-responders in all three groups decline as the study progressed. In the low-amount, low-intensity group, however, the non-response level plateaued after eight weeks, with more than one-third of the subjects still failing to see any improvements after 24 weeks.

That suggests the minimum exercise level prescribed by health guidelines isn't sufficient for everyone: "It's just not enough to move the needle on a number of people," Ross says. "I mean, [a non-response rate of] 30 per cent is not a trivial number."

Doubling the amount of low-intensity exercise reduced the non-response rate to 17.6 per cent, but the most impressive results were recorded in the high-intensity group, in which the number of non-responders was reduced to zero by the end of 24 weeks.

So is "non-responder" just another way of saying "didn't push hard enough"? That debate is far from over.

One problem with Ross's study, according to Dr. Jamie Timmons, the researcher who oversaw Mosley's exercise program in the BBC documentary, is that more subjects dropped out of the high-intensity group or failed to complete a minimum number of sessions than in either of the other groups.

It may be that the non-responders were the most likely to drop out, making the results "deeply flawed," Timmons, who is now at King's College London, said in an e-mail.

Of course, aerobic fitness isn't the only benefit of exercise. Researchers have investigated a wide variety of health measures, such as blood pressure, heart rate, insulin sensitivity and cholesterol, and in each case found wide variations in how people respond, with a few subjects showing little or no improvement.

Ross's results suggest that upping the exercise dose by increasing intensity might help reach some of those seeming non-responders.

But the most important point, he emphasizes, is that non-responders for one outcome aren't necessarily the same people who don't respond for other outcomes: "Even if you have no change in fitness, you might have substantial changes in insulin sensitivity," he says.

That, as it happens, was exactly the case for Mosley, the BBC presenter, whose insulin sensitivity rocketed up by 24 per cent, even though his aerobic fitness didn't change.

In the end, that's the most important thing to remember if you're exercising faithfully but not seeing any benefits: Response – and non-response – depends on what you measure, and the biggest improvements may be invisible.

Is your child getting enough physical activity? Let's think about what 'active' really means
November 25, 2015 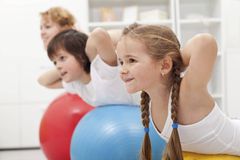