Toned abs, sculpted legs, tight butts – so many tight butts! – buff arms, all of them often covered in glistening sweat. If you've been on the social-network site Pinterest, whose popularity has grown exponentially, particularly among women, you've seen these curated menageries of perfect bodies, sometimes accompanied with inspirational quotes. Usually, these images have been pulled from websites across the Internet by users and "pinned" to virtual boards under headings such as "Fitness" and "Motivation."

While some of the images are so racy you might feel uncomfortable looking at them at work, they do offer very clear goals. Who wouldn't want the biceps or glutes of a fitness model or professional athlete? Collectively, the sight of them will make anyone feel guilty about skipping spin class or eating that chocolate bar after lunch. But can images actually motivate people to get into better shape?

"For most people, the answer is absolutely not," says Michelle Segar, an expert on exercise and behaviour. She's the associate director of the sports, health and activity research and policy centre for women and girls at the University of Michigan. "Young women in their 20s who are already pretty thin, yes, that kind of thing maybe in the short term is motivational to them," adds Dr. Segar.

But for women who are older or have body types that make weight loss a struggle, especially those who have already tried one exercise regime or diet fad after another, the sweaty, perfect bodies on Pinterest and similar sites can have "anti-motivational effect."

"It reminds people that they've failed to do it, time and time again," Dr. Segar says.

However, some Pinterest users say images of incredibly fit people can help get others off the couch. Many gyms, personal trainers and other fitness professionals have created Pinterest boards with such images for just that reason. For instance, Booty Camp Fitness, a Canadian company, has a Pinterest board marked "Inspirational Pictures." One of those pictures is of a bum so tight you could bounce nickels off it accompanied by the words, "You're not gonna get the butt you want by sitting on it."

"Visualization is a very powerful technique," says Lisa Richards, Booty Camp Fitness' communications manager. For as long as there have been fridges, people have been clipping photos out of magazines and putting them on them as a reminder of what they aspire to. Pinterest and other social-networking sites provide not only the digital version of that, but, importantly, give it a public dimension by announcing to everyone on your social network that is something you are aiming for. "It'll certainly keep you accountable at the very least," Ms. Richards says.

Indeed, multiple studies have shown that people who make weight loss or fitness goals public do better at achieving them. But collecting inspirational images is only one piece of the puzzle. Alone, it likely won't get you to your goals, says David Conroy, a professor of kinesiology who studies motivation at Penn State.

"There are many levels of motivation, but in our most conscious form there's what's called a motivational phase and then a volitional phase," he says. The first phase involves forming a goal, such as those tight abs and buns of steel. "That's where these kinds of images might be helpful, because they're an outcome that can lead a person to select that behaviour."

Leave it at that, however, and there's a problem. "There's a big difference between selecting a goal and saying this behaviour is what I want to engage in and actually following through on that and doing the behaviour," Prof. Conroy says. In order for motivation to be followed by action, there usually must be a specific plan for how to achieve goals. Pile up all the photos of buff bods you want; without a detailed road map of how to get to one, chances are you won't.

"For the most part I think they just really perpetuate this image-based obsession," Robin Konie, a Utah-based movement therapist. "For the average woman out there, it's just defeating before you even start."

Many of the photos found on the site feature athletes or fitness models, people who have the time to exercise much more than the average person. On top of that, many images found online have been photo-shopped, creating a truly impossible standard, Ms. Konie says.

"Our priorities are messed up. We're trying to look like this unrealistic image instead of trying to be healthy," she says.

That's not to say many people haven't found inspiration on the site. Late last year, Caitlin Boyle was having a hard time finding the will to go running when she discovered Pinterest.

"They'll have really cool images of workout guides or workout tips. Or before-and-after [photos]that are more realistic and motivating. You can see that, wow, if that woman could lose 200 pounds and run an Ironman, then I can get off the couch," says the 28-year-old from North Carolina.

But Ms. Boyle isn't pushed to lace up because of photos of gorgeous athletes, however. It is words that get her out on the road. "I really love positive quotes," she says. Whenever she sees them on Pinterest, Ms. Boyle says she feels the determination to put on her shoes and go running.

One quote in particular that she found on the site gets her every time. "I love the one that says, 'No matter how slow you go, you're still lapping everyone on the couch.'"

In other words, you don't have to be great at exercise, you just have to exercise. Whatever the impossible standards some of us might hold ourselves to, that's a worthy sentiment for all of us.

App charges gym-goers every time they miss a workout
January 17, 2012 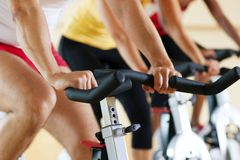