Despite the media attention that deaths during marathons have garnered, running long-distance races is not harder on the heart than other activities, a study concludes.

"This finding provides important reassurance that this is a generally safe and well-tolerated activity," said Aaron Baggish, director of the cardiovascular performance program at Massachusetts General Hospital in Boston and the lead author.

The study, published in Thursday's edition of the New England Journal of Medicine, showed that 59 runners suffered cardiac arrests (42 of which were fatal) among the 10.9 million marathon and half-marathon participants in the United States from 2000 to 2010.

That works out to one death per 259,000 participants. That is about half the death rate from cardiac arrest in the general population, one in 125,000.

It also compares favourably to other sporting events such as triathlons, in which there was one death per 52,620 participants, according to an earlier study.

Dr. Baggish and his team were able to track down detailed medical information on 31 runners who experienced heart problems, including the autopsy records of 23 who died. The vast majority, 24, had heart abnormalities, principally cardiomyopathy, a thickening of the heart muscle. The balance had atherosclerosis, essentially arteries clogged with plaque.

These underlying conditions are detectable with simple tests, but the researchers did not recommend mandatory testing before marathons. Dr. Baggish said the question of widespread testing is controversial because it would be costly and difficult to enforce.

Beth Abramson, a spokeswoman for the Heart and Stroke Foundation of Canada, said there are two simple take-home messages to be taken from the research: "Over all, marathon running is safe" and "You should discuss your heart health with your physician before starting an exercise program, including running."

Dr. Abramson, who is a cardiologist at St. Michael's Hospital in Toronto, also noted: "You don't have to run marathons to be fit."

The average age of runners who suffered from cardiac arrest was 42 and vast majority – 51 of 59 – were men, according to the study. Of the total incidents, 40 occurred during marathons (42.2 kilometres) and 19 in half-marathons (21.1 km).

The researchers noted that, during the decade-long study period, participation in long-distance running events has soared. More than two million people ran marathons and half-marathons in the U.S. last year, more than double the number in 2000. Many of the newcomers are middle-aged or older, a demographic that has more risk factors for heart disease such as high blood pressure, high cholesterol and obesity.

The new research has essentially the same conclusions as an earlier study conducted by Donald Redelmeier, a professor of medicine at the University of Toronto. He found 26 deaths among 3.3 million marathon and half-marathon participants over a 30-year period.

Dr. Redelmeier also showed that almost all the incidents of fatal cardiac arrest occurred in the last kilometre of races. That is confirmed in the new research.

One intriguing aspect of the latest research is that it shows 29 per cent of those who suffered cardiac arrest during a marathon survived; the overall out-of-hospital survival rate is only 8 per cent.

Dr. Baggish said that is because almost everyone who collapsed during a race received cardiopulmonary resuscitation from bystanders or medical personnel who are omnipresent at marathons.

"A key message here is the importance of bystander CPR," he said. As a result, his team will be offering CPR training to runners, family members and spectators at this year's Boston Marathon, a practice he hopes will spread to other events.

About 1.3 million Canadians have heart disease, and 317,500 others are living with the effects of a stroke. In 2007, the most recent year for which there are detailed data, 69,503 people died from cardiovascular disease, according to Statistics Canada.

Heart takes a beating in marathons, but pumps effectively within a week
May 18, 2009
Racing rookie? Try some advice from seasoned marathoners
October 9, 2011 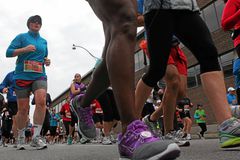