Over the past 16 weeks we have covered a lot of ground. With your tapered body and focused mind, you can now focus on the final task: the carbo load. The goal is to maximize your stores of glycogen, the main energy source for the marathon.

Some runners try a carbo depletion about seven days prior to race day, where they eat very limited carbs and focus more on protein foods. They pile on the carbs in the last four days leading up to the race. I prefer to keep similar routines during race week so that there are few, if any, surprises come race day. We've trained our minds and bodies well, so let's not throw a curve ball at this stage. I'm a big fan of practising the same routine you followed through your months of training. Remember what you ate before long runs and repeat that pattern.

Many years ago, I learned a good tip from my friend and former Ironman champion, Lori Bowden. She suggested that you eat the most two days before an epic endurance event. So if you are racing on Sunday, Friday is your day to chomp away frequently on your favourite foods (even if there are some sweets in there), emphasizing carbs more than other fuel sources such as fat and protein.

Enjoy a big dinner on Friday night (my favourite is chicken parmesan). On Saturday, eat normal meals but graze throughout the day so that you feel sated. On the morning of the race, stay away from high-fibre foods like bran and apples if you want to avoid too many bathroom stops.

Make sure you eat far enough in advance so that everything is digested, but not so far out that you will be hungry at the starting line. It's a good idea to bring fast fuel, like a gel, along with you. You can take this before the race or bring it along for the early kilometres.

It's best not to experiment on race day. Throughout the race, follow the same routine with the water, energy drink and gel intake as you did in training. A general rule is to have a sip of a drink every three km, alternating water and energy drink, and to take half to a full gel every 45 minutes or so.

My most important tip is to start slowly and build into the race. Make a plan to be on goal pace by eight kilometres. After the halfway mark, be prepared for fatigue to set in. Use other runners at this point, looking ahead and targeting racers to catch. With five km to go, pass people and don't let others pass you. It is a major boost to catch people ahead of you.

To maximize recovery from the marathon, be sure to drink often after you finish the race. Eat small frequent meals through the rest of the day. Enjoy those meals and think back on the major achievement you just accomplished. You may be tempted to soak in a hot bath, but your muscles will thank you if you choose a cold shower instead. The cool water will reduce inflammation and assist in speedier muscle recovery.

You'll have a great day out there. Enjoy the experience and be proud of yourself.

Nicole Stevenson is a running coach and the ninth-fastest female marathon runner in Canadian history. She is a long-time competitor in the Canada Running Series. 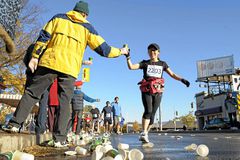