Since the dawn of portable music, runners have relied on their playlists to pump themselves up, stay motivated or simply stave off boredom. Now there's another option: Transform your tunes into a sophisticated cruise-control device that helps you maintain a specific pace or effort level.

Researchers at Simon Fraser University's Locomotion Lab released their Cruise Control app for Apple iOS devices last month. The idea emerged from fundamental research on how humans choose their stride rate at different walking and running speeds. And the simple fact that it works contradicts a popular misconception about the existence of an "ideal" stride for running.

Many runners believe that your stride rate should be the same no matter how fast you're going, and that all runners should aspire to an ideal stride rate of 180 steps a minute – an idea rooted in informal measurements of distance runners taken at the 1984 Olympics. If that were true, the app wouldn't work.

The app works. It controls your pace by subtly increasing or decreasing the speed of the music you're listening to, while monitoring your speed with the built-in GPS and accelerometers in the iPhone, according to Max Donelan, a professor of biomechanics and neurophysiology who developed the technique with PhD candidate Mark Snaterse.

As long as you keep your footsteps in time with the beat of the music – a synchronization that happens almost automatically – you'll speed up and slow down on cue, without even realizing it. With this technique, the app can keep you locked to within about 1 per cent of whatever goal pace you've programmed in, Donelan says.

The changes in music speed are mostly imperceptible – as long as you start with tunes at roughly the right tempo. The app automatically searches your music collection for songs with a rhythm between 140 and 180 beats a minute (or between 70 and 90, in which case you'd take two steps a beat).

You can also choose to set a goal heart rate instead of a goal pace, if you wear a heart-rate monitor that can communicate with your iPhone. The music will then adjust to keep your pulse as close as possible to this goal throughout the run. Or you can simply leave the app in "Free Run" mode, in which case the music will adjust to synch with your stride no matter how fast or slow you run.

(With tweaks, the same technique could also be harnessed for walking and cycling. In fact, it already sort of works on the bike, according to one early reviewer who stuffed his iPhone into his cycling shorts so that it would be able to detect his pedalling rate. "It's not optimized for that," Donelan notes drily.)

Underlying this whole technique is the relationship between how fast you're running, how many steps you're taking a minute and how long each step is. Donelan's research, along with dozens of studies before him, clearly shows that runners speed up by increasing both their stride rate and their stride length simultaneously. Whatever your ideal stride rate is at one speed, it will be different at other speeds. That, in turn, means that it's possible to control your speed by simply keeping time with the app-controlled beat of the music.

Still, Donelan and Snaterse included a "cadence" mode for the app. If you want to run at a stride rate of exactly 180 beats a minute, you can program that in and the app will adjust your playlist to that cadence. Even if you don't believe in an "ideal" cadence, there are still training benefits to programming in a higher cadence than you're used to, Donelan points out.

"If you increase cadence, you'll also automatically increase stride length – and as a result you'll run faster," he says.

Of course, there's no shortage of apps and gadgets that feed runners real-time information about pace, effort and so on. The Cruise Control app's unique offering is that it makes pace control subconscious, so you don't even have to think about it (assuming you've set a pace goal that you're physically capable of maintaining). But Donelan sees the app as something more than a simple speedometer.

"It's about fully integrating your music experience with your running experience," he says.

What music does a biomechanics professor run to? In his own words, here's what's on Max Donelan's list:

1. Lose Yourself – Eminem: Takes a little while to build, but when it kicks in, it is running bliss. All our early testing was done with this song, so it has been listened to for easily a thousand kilometres of running.

2. Politik – Coldplay: Wicked song with a driving beat right from the start that gets you to your desired pace quickly.

3. The Cave – Mumford & Sons: When the chorus kicks in with this song, we can't help but smile and sing along. Yeah, you can look a little goofy.

5. Paint It Black – The Rolling Stones: This is one of Mark's Dad's favourites. He was our first and most dedicated beta tester. I am afraid we got him hooked on a running habit that hadn't previously existed.

Five apps for a wired run

RunKeeper: There are plenty of apps that time, measure and map your run using your smartphone's GPS; this is one of the most popular. You can also upload and share your workout results. Free, for iOS and Android.

iSmoothRun: Another tracking app, it uses your phone's accelerometer in addition to GPS to keep more accurate tabs on speed and distance even if you lose GPS coverage. $4.99, for iOS.

C25K: For new runners, the couch-to-5K app offers guidance on when to walk or run and how far. The promise: 30 minutes, three times a week for eight weeks, will get you to the finish of a 5K. Free, for iOS.

Ghost Race: A basic app that allows you to "race" against an opponent running a preset distance and pace. 99 cents, for iOS.

Zombies, Run!: A more immersive game/workout, with storylines by novelist Naomi Alderman (who recently co-wrote a zombie novel with none other than Margaret Atwood). You'll be spurred to sprint extra hard when you hear a pack of the undead nipping at your heels. $7.99, for iOS, Android or Windows phone. 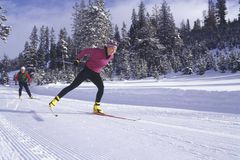 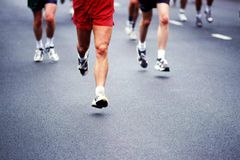 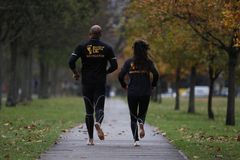