Three of the best distance runners in Canada, all born in Kenya, live in a semi-detached house with yellow siding and a spacious backyard just a few blocks from an industrial sector in Hamilton, Ont. It is where they come to rest after a long run, and to unwind after a long shift at work.

All three men work in a pharmaceutical supply warehouse nearby, where they pack orders for hospitals. They train in whatever free time they have. Mr. Ongeri wakes at 4 a.m. to run before his shift begins two hours later, while Mr. Karanja and Mr. Onsare will run later in the day before their night shift starts at 3:30, or perhaps when they get home around midnight.

"In this country, the days are too short. We have so many things to do, so you've got to squeeze yourself no matter what," Mr. Karanja says. "You have to have a strong mental attitude, otherwise there's no way you can make it in this life."

Many don't. Plenty of runners from Kenya have arrived here over the past decade with great expectations, only to return home weeks or months later because life in Canada proved too difficult. Those who stick around have to deal with the language barrier, the country's vast geography and the reality that there are very few races with significant prize money.

They also need to send whatever money they can home to their families, whom they often haven't seen in years but hope to bring here one day.

"That's the biggest reason that they're here," says Gord Dickson, a six-time winner of the Canadian Marathon Championship who represented Canada at the 1960 Olympics. Mr. Dickson has been helping runners from Kenya living in Canada for about a decade now, getting them registered for races, driving them to events and providing coaching advice.

Like his housemates, Mr. Onsare has not seen his family in a long time. "You can miss them, but you have to make a life," he says.

Mr. Karanja, 33, has not seen his wife, 12-year-old daughter and three-year-old son since he moved here in 2007. "When I left, my wife was one-month pregnant, so I've never seen my boy," he says. He hopes that he will be able to bring his wife and children here within a year. "I'm in the process of working it out," he says.

And fewer Kenyans are now running in Canada compared to a decade ago, says Manny Rodrigues, the elite athlete co-ordinator at the Ottawa Race Weekend. The reason? There's more competition. In the early 2000s, few top Americans would compete in the money races in Canada, opening up opportunities for runners from overseas, Mr. Rodrigues says. But now, with plenty of homegrown talent at the start line, it is much more difficult to score a top finish.

Some events will pay to bring in top runners. The BMO Vancouver Marathon footed the bill this year for Mr. Onsare's travel, lodging and meals. Some events may even pay the elite runners upwards of $10,000 in appearance fees to participate in events. When it comes to big events such as the Boston, New York or London marathons, a select group of runners can make six-figure appearance fees, says Mr. Rodrigues.

But most runners are on their own, and some who come from overseas don't initially understand the geography, Mr. Torrance says. "There are stories from back in the day in Vancouver of guys arriving in Toronto and saying, 'Here we are to run the Vancouver Marathon.' No, you've made it to Canada, but you're not in Vancouver yet," he says.

The Ottawa Marathon and Toronto Waterfront Marathon will pay to bring top runners all the way from Kenya or Ethiopia. And both offer the biggest paydays for marathons in Canada. This year, the first-, second- and third-place finishers at Ottawa took home $15,000, $10,000 and $5,000, respectively; while at the Scotiabank Toronto Waterfront Marathon the top three finishers this year will pocket $20,000, $12,000 and $10,000.

Those sorts of cheques are highly sought after by runners such as Mr. Karanja, Mr. Ongeri and Mr. Onsare, who will participate in six to a dozen events a year, mostly in 5- and 10-km races, which offer much less money.

Mr. Ongeri took home $500 for winning the Bread and Honey 15-km last month, the same amount for his victory in the Tim Hortons Peach Bud 10-km Road Race last month, and another $500 for a second-place finish in the GoodLife Toronto Marathon in May. Mr. Karanja received $300 for winning the Run for Water 10-km last year.

The money these men make go to paying bills, travelling to races and supporting their families back home. "We need a sponsor," Mr. Ongeri, 32, says, and the other men nod in agreement.

And whether they finish first or not, after a race they go back to training, back to their jobs at the warehouse. They won't go out and party, and whatever free time they have is spent tending the garden or preparing for their next race. 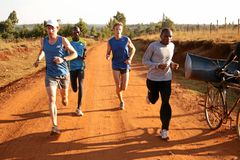 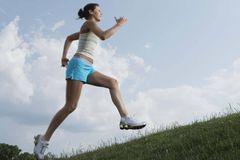