Will working out help me beat the flu?

As cold and flu season kicks into high gear, so too does the search for an immunity edge.

Recent studies offer plenty of evidence that regular exercise really does strengthen immune function - a claim that can't be made for most of the pills and potions whose sales spike at about this time of year. But like any powerful medicine, exercise also carries the risk of an overdose.

"It's what experts call the 'J-curve' hypothesis," says Brian Timmons, a researcher at McMaster University's Children's Exercise and Nutrition Centre. "Moderate intensity is good, but too much exercise is not so good."

Exercise also turns out to be a mixed blessing if you do get sick: harmless and possibly even helpful for some symptoms, but not recommended for others.

Since it's difficult to get ethics approval (and find volunteers) for studies that involve being infected with cold or flu viruses, much of the relevant research has been performed on mice.

In a key 2005 study from researchers at the University of Illinois, three groups of mice were infected with the flu. One group was sedentary, another exercised for 20 to 30 minutes a day and an extreme group exercised for 2.5 hours a day. The moderate group had an 82-per-cent survival rate, almost double the 43 per cent in the control group. But only 30 per cent of the extreme group survived.

Translating the definition of "moderate" exercise from mice to humans is not a trivial task, but those following standard exercise guidelines (for example, 150 minutes of moderate exercise or 75 minutes of vigorous exercise a week) should be fine.

"If I'm swimming in the morning then running at night, or doing a marathon, that's where you're going to see a dip in immune function," Dr. Timmons says.

Despite your best efforts, you may still get sick. But that doesn't necessarily mean you should abandon your workout routine, according to an unusual study in which researchers at Ball State University in Indiana infected volunteers with rhinovirus (the common cold) in 1998.

Thomas Weidner, an athletic trainer at the university, first infected 45 volunteers and put them through a series of treadmill tests at the peak of their illness. To his surprise, there was no difference in performance or physiological response compared with uninfected controls.

In a separate study, he infected 50 volunteers and had one group do 40 minutes of exercise at 70 per cent of maximum heart rate every second day while the other group just rested. There was no difference in the severity and duration of the symptoms, and the exercise group reported feeling slightly better than the controls.

Though they're more than a decade old, those results haven't been contradicted by any studies since, Dr. Weidner says. They offer further support for a clinical guideline known as the "neck check," he says: Patients are generally free to exercise if their symptoms are above the neck, such as a runny nose. Symptoms below the neck, on the other hand, such as aching muscles or a chest cough are grounds for caution.

And even these guidelines are more about caution and comfort than hard and fast rules.

"Personally, I find that I feel better getting some exercise when I'm feeling sick," Dr. Timmons says. "But that's not advice that you can give across the board."

As always, though, prevention is the ideal approach, and a study published this month in The Journal of Infectious Diseases suggests that the challenge is less daunting that you may think. Using mice, researchers at Iowa State University compared the immune-boosting effects of a 31/2-month program of moderate exercise with the effects of a single 45-minute treadmill run done 15 minutes before being infected with the flu virus.

Not surprisingly, the well-trained mice showed the greatest reduction in symptoms and virus load over the next 10 days. But the mice that had done just a single run also showed improvement compared with controls. In other words, it's not too late to hit the gym in the hopes of staying healthy this winter.

Alex Hutchinson blogs about research on exercise and athletic performance at SweatScience.com. 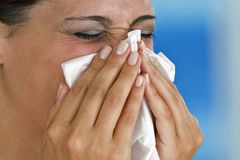 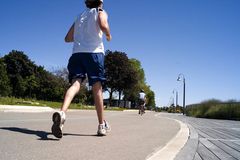