Eventually, your muscles can no longer get enough oxygen. It's an immutable physical limit that kicks in during any sustained physical exercise and tells your body: "This fast – but no faster."

At least, that's the theory we've been working with since 1923. But a controversial new study from researchers on three continents suggests that the famous "VO2max" – the maximum amount of oxygen that you're able to deliver to your muscles during hard exercise – isn't really a maximum at all. Your heart and lungs don't call the shots after all; your brain does.

The concept of VO2max was first introduced by Nobel Prize-winning physiologist A.V. Hill, who found that the amount of oxygen consumed by his muscles increased as he ran at a steadily increasing pace – up to a point. Eventually, his oxygen consumption would plateau, even if he continued to run faster and faster until he reached exhaustion. That plateau, he argued, represented his body's "maximal oxygen uptake," or VO2max.

In the decades since, VO2max has become a standard tool to assess aerobic fitness. Researchers measure it using an incremental test to exhaustion: On a treadmill or exercise bike, subjects start at an easy pace, and get faster every minute or so until they're unable to continue, having reached a plateau in oxygen consumption shortly before failure.

So what causes this plateau? In the conventional view, there are three possibilities, according to Fernando Beltrami, a researcher at the University of Cape Town in South Africa.

Over the decades, debate has raged among physiologists about the ultimate location of the bottleneck: heart, muscles or lungs? But the new theory, proposed by physiologist and author Tim Noakes (who is also Mr. Beltrami's university adviser), suggests that the limit may not be physical at all.

In Dr. Noakes's "central governor" theory, your decision to slow down or stop during self-paced exercise isn't the result of an absolute physical limit. Instead, your brain applies the brakes proactively to prevent you from reaching these limits. After all, if you really did run to the absolute edge of your physical limits, Dr. Noakes is fond of pointing out, you'd be dead.

Last month's issue of the British Journal of Sports Medicine contained eight different studies that, in various ways, offered support for Dr. Noakes's still-controversial views. The most significant was a study led by Mr. Beltrami, with collaborators in Norway, Britain and Australia, that turned the standard incremental VO2max test on its head and used a "decremental" test instead.

Mr. Beltrami's 26 volunteers started by performing a conventional incremental VO2max test. Then, on a separate day, half of them repeated the incremental test while the other half performed a decremental test. After a brief warm-up, the decremental test ramped immediately to a speed higher than the maximum speed reached in the previous incremental test. After about a minute – just before the subjects were about to fall off the back of the treadmill – the speed was decreased by one kilometre an hour. This process was repeated over and over, with the speed being lowered just before the subjects reached failure.

In the group that did two incremental tests, VO2max scores remained the same; but in the decremental group, VO2max scores increased by an average of 4.4 per cent. In other words, the subjects were suddenly able to transport more oxygen to their muscles, simply because the test structure was altered – a clear indication that it wasn't a fundamental property of the heart, lungs or muscles that created the initial plateau.

The researchers reasoned that, since the subjects knew that the decremental test would become progressively easier, their brains would be less likely to pre-emptively apply the brakes in self-defence. Since emotional stress can affect blood flow and metabolism, that knowledge alone could alter their physiological response to exercise.

There was one further surprise: When the subjects did a final incremental VO2max test at the end of the experiment, the group that had previously performed the decremental test maintained their new higher max – a result that left even Mr. Beltrami puzzled. Whatever additional exercise capacity was unlocked by the novel decremental protocol somehow persisted.

For now, the study raises more questions than it answers. But it suggests that some of the limitations we encounter during hard exercise may actually be self-fulfilling prophecies – and that knowing your VO2max is less important than believing that you can go a little faster or a little farther.

new
How a tired brain can slow your physical performance
September 4, 2011 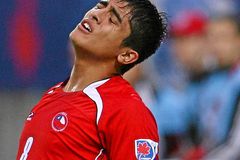