How hard should I exercise if I want to lose weight?

The famous "fat-burning zone" is a seductive concept. Keep your workout nice and easy to maximize fat-burning, it argues - no need to waste time and effort by pushing hard.

Unfortunately, this concept suffers from flaws of logic and physiology. But the question of how hard you should exercise in order to lose the most weight remains a complicated one, and there are good reasons to include both very easy and very hard physical activity in your routine.

The myth of the fat-burning zone

What's missing, though, is how many calories you burn. A leisurely walk that burns 100 calories might take 85 calories from fat and 15 from carbohydrate. You're better off going for a moderate run that burns 500 calories in the same amount of time, with 250 from fat. (Exercise at the highest intensities burns even more calories, but you can't sustain it for as long.)

But there's a more fundamental problem with the fat-burning zone. If you burn mostly carbohydrates during a workout, the calories you consume afterward will replenish those depleted carbohydrate stores. If you manage to rely more on fat during your workout, on the other hand, your carbohydrate stores will remain full. As a result, whatever calories you consume afterward will be stored directly as fat, undoing your fat-burning efforts.

This effect was demonstrated by Australian researchers in a study published earlier this year in Cell Metabolism. In mice that were genetically altered to burn fat instead of carbohydrate, unburned carbohydrates were simply converted into fat for storage. The total "energy balance" remained unchanged, and the mice gained or lost the same amount of weight as normal mice under the same conditions.

"Your body will use the energy it needs and store the leftover fats, protein or carbohydrates as fat," lead researcher Greg Cooney of the Garvan Institute of Medical Research explained when the study was released. "When you do the sums, it's ultimately a matter of calories in and calories out."

Why you need low-intensity exercise

The problem with vigorous exercise is that it stimulates appetite hormones to make you hungry - part of your body's elaborate "set-point" mechanism to keep your weight stable.

One way to get around this trap is with physical activity at a low enough intensity that it doesn't spark hunger.

A forthcoming study by University of Massachusetts Amherst researcher Barry Braun compared a group of volunteers who sat all day (they even used wheelchairs to visit the bathroom) to a group that didn't sit down at all. The difference in energy expenditure, he told The New York Times, was hundreds of calories - but the level of appetite hormones and hunger in the two groups remained identical.

Why you need high-intensity exercise

A Columbia University study published earlier this year found that when subjects were fed a liquid diet until they lost 10 per cent of their body weight, cellular adaptations made their muscle fibres 15-per-cent more efficient at converting energy into force.

This may sound like a good thing, but it means that you burn fewer calories when doing the same amount of work after losing weight - and that pushes you back toward your starting weight.

How can you escape this "efficiency trap"?

The effect appears to be most pronounced at low intensities, so the researchers suggest including some high-intensity exercise in your routine to maximize calorie consumption.

Why you need both

One group did moderate running for 30 to 60 minutes at a time, while the other group did a series of four to six intense 30-second sprints with four minutes of rest. Both groups lost similar amounts of fat and increased aerobic fitness by about 12 per cent.

You need both your heart and your muscles to be healthy, so include both types of exercise in your routine.

Before you follow a pace bunny, learn the race plan
August 5, 2010 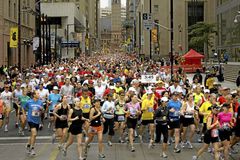 Are protein shakes the weight-loss magic bullet?
November 7, 2010
Nearly three-quarters of Ontario adults are obese or overweight
September 9, 2010
Follow Alex Hutchinson on Twitter @sweatscience
Report an error Editorial code of conduct
Due to technical reasons, we have temporarily removed commenting from our articles. We hope to have this fixed soon. Thank you for your patience. If you are looking to give feedback on our new site, please send it along to feedback@globeandmail.com. If you want to write a letter to the editor, please forward to letters@globeandmail.com.
Comments