Imagine a sloped treadmill that’s on such a sharp incline it seems to be trying to buck you off. Until three weeks ago, I’d never run on a machine, but I figured I could handle one. After 30 seconds on the sadistic Woodway Curve, I wasn’t so sure. It was just part of a 50-minute session at Toronto’s Fuel Training Club, which also involved squats, push-ups and knee-high runs, as well as resistance work while dangling from the ceiling with TRX straps, plus explosive 30-second intervals on the Assault AirBike and the erg rowing machine.

I went just once, in the service of journalism and curiosity. Tim Hayos goes as many as six times a week. The 25-year-old Suncor Energy sales manager has been cultivating a lean, ripped body to match the classical Greek ideal: broad shoulders, a slender waistline, biceps so defined you can see them through a sweater, and, of course, a six-pack. I’m 30 and stay relatively fit, but nothing – not even the terrifying indemnity waiver I was asked to sign – could have prepared me for Fuel.

I felt high the entire time, my skin wept sweat and during a plank on the TRX I heard something pop inside my chest. It was one of the most intense physical experiences of my life. For Hayos, it was a workout like any other.

This pursuit of a slim physique marks a move away from the bulky bodybuilder look of the eighties and nineties. “In the past,” Hayos says, “guys maybe wanted to look like Schwarzenegger, but now many would rather look like Adam Levine,” the lithe, toned and tattooed singer from the Los Angeles band Maroon 5.

“He’s the model of what a sexy, fit guy looks like today.” That desire for sinewy strength requires a new kind of regimen: bursts of explosive movement powered by vegetables, unsalted nuts and egg-white omelettes rather than slow, repetitive weightlifting powered by steak, steroids and protein shakes. 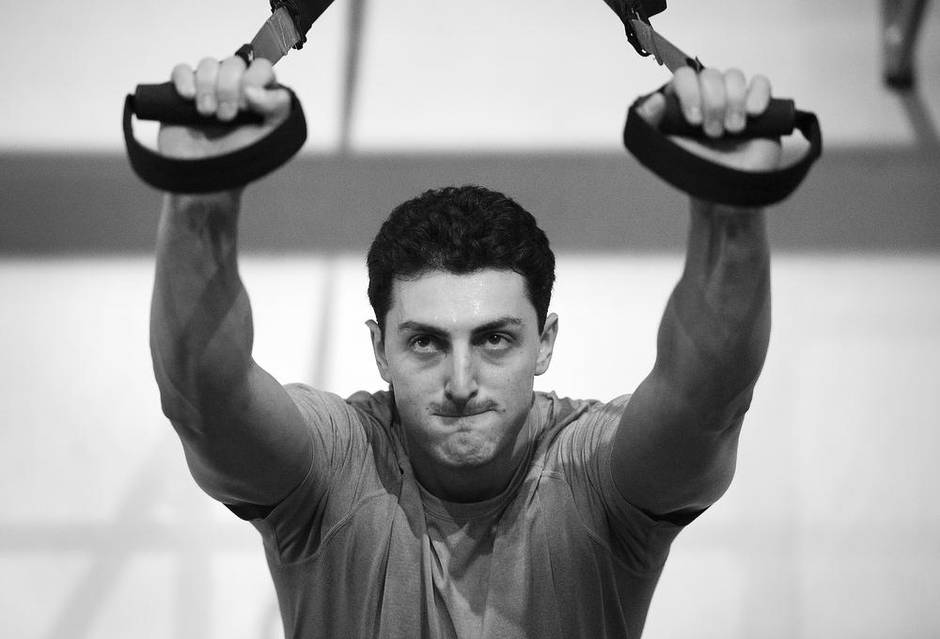 Tim Hayos, right, uses TRX straps while working out at Fuel Training Club in Toronto. (Photos by Darren Calabrese for The Globe and Mail)

We all know the significant benefits of regular exercise: A stable BMI and blood-pressure level correlate with a decreased risk of heart disease and diabetes. And for those who practise physically demanding hobbies such as dirt biking or hockey, some added strength is an asset. But nobody needs a torso that’s as textured as terra cotta tiling.

I talked to Hayos and about eight other guys of roughly his age and fitness level to get a better sense of what drives a man to get ripped. Why commit to such an undertaking? And where’s the line between an impressive regimen and an excessive one?

I learned a few things: One, unless you’re genetically gifted, you can’t get ripped casually. Two, when we talk about “fitness,” we’re talking about other things, too. And three, the difference between ambitious versus pathological exercise is more a question of mindset than of hours spent at the gym.

Ilja Lukac, a 26-year-old advertising professional who works out four times a week at ManTraining Fitness (the small classes and personalized approach is similar to Fuel, but the gym is only open to men), wants to be at ease in his skin. In his early 20s, his weight veered toward 230 pounds and his cholesterol was so high that his doctor recommended pills. Four years later, he’s brought his cholesterol in line and his weight closer to 170, a number that he feels complements his 5-foot 10-inch frame. “Do I feel comfortable in a T-shirt? Do I feel comfortable with the least amount of clothing on?” Lukac says when asked about his ideal body. “That’s usually the metric for me.”

If the body-image demands on women are absurdly restrictive, the pressures on young men are weirdly contradictory: Weekend guy rituals with pitchers, nachos and wings are difficult to reconcile with the lean ideal. These disparities play out in popular culture. For every laid-back Seth Rogen, there’s a shredded Channing Tatum; for every fluctuating Jonah Hill, there’s a consistently slender Joseph Gordon-Levitt.

In the midst of these conflicting pressures, guys such as Lukac and Hayos have found a solution: Weekday discipline is a licence for weekend permissiveness. “My rule is eat clean and healthy most of the time,” says Lukac. “But if I’m going to indulge in something, there’s going to be no guilt follow-up. I’m going to eat that meal, and that’s going to be it.”

Similarly, Hayos aims for an 80/20 split between clean living and dude excess. The equilibrium sometimes veers in wild directions – “At my age, I’m going out a lot, drinking a lot, so I live a balanced lifestyle, but it’s on the extremes” – but the see-saw routine works for him. Sure, it’s intense, but I’ve met artists, musicians and software designers who are just as committed to their hobbies as Hayos is to his.

There is a point, however, where intensity tips into pathology. Eating disorders were once thought to affect nine times as many women as men, but research over the past decade suggests that if obsessive workout practices and muscle dysmorphia are taken into account, that ratio swells to something closer to two to one.

For Jay Walker, a 27-year-old personal trainer at Totum Life Science in Toronto, it’s a question of how a person relates to exercise. “When you’re missing your workouts, is there an increase in stress?” he asks. “Or are you able to say, ‘It’s a bummer I missed it. I’ll get it in tomorrow?’ ”

During his late teens and early 20s, exercise was a daily fixation for Walker but rarely a source of pleasure. “I hated long-distance running, but I was doing it for hours a day,” he says. “When I was too exhausted to work out, I would compensate by drastically restricting what I was eating.” 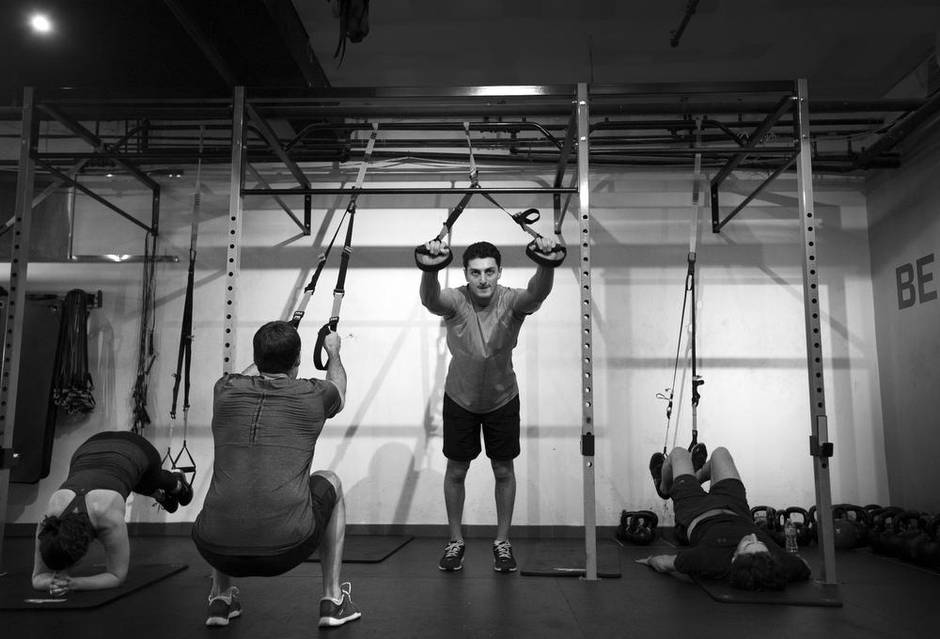 He began logging his activities – time spent sitting, standing and moving – in 10-minute intervals to ensure that he never consumed a higher number of calories than he burned off. In desperation, he reached out to his mom and sought counselling at Sheena’s Place, a Toronto support centre that specializes in body-image issues (and is currently developing an outreach program targeting men). He still works out three to five times a week, but rarely goes on long-distance runs and never counts calories.

His experience is not anomalous, says Dr. Caleb Netting, a fitness enthusiast and orthopedic-surgery resident at the Ottawa Hospital. “I’ve seen people come into the clinic with muscles that are so sore that they essentially get a kind of rhabdomyolysis,” says Netting (that’s when the breakdown of muscle products enters the bloodstream and urine, sometimes poisoning the kidneys). He’s assessed patients for compartment syndrome, a condition in which extreme swelling cuts off muscle circulation, and seen men who have snapped tendons from overexertion – these can potentially be repaired through rest, but some patients push for surgery so they can get back to the gym.

In a culture where extreme fitness is fashionable, it can be difficult to distinguish an ambitious regimen from a disordered one. (Symptoms include intense physical activity that’s coupled with undernourishment and hitting the gym while neglecting other commitments, such as work and family.) Walker believes that trainers should be aware of these issues, and be able to recommend a good therapist. Still, he doesn’t discourage clients from working out intensively, nor does he believe that ambitious exercising is necessarily a sign of mental distress.

I agree. I spoke to enough stable, self-aware guys to be convinced that intensive exercise can be gratifying and psychologically healthy. But it’s not just about fitness. It’s an emotional thing, too. Virtually every man I spoke with remembers a moment – the discovery of thinning hair or a sudden spike in weight during university – that made him want to regain control.

Working out is about the desire to take command of our unpredictable bodies. It’s an attempt – sometimes remarkably successful, if only in the short run – to dictate the terms on which our bodies will change instead of letting aging and genetics take the lead. “If before you couldn’t do one push-up to save your life and then one day you can lift a 400-pound motorcycle onto a dirt road without hurting your back, that’s something you notice,” says Lukac. “You start going, ‘Oh, I like that.’”