Hindsight isn't a very useful clinical tool. When you're trying to figure out whether you can safely ignore that twinge in your leg, or whether it's the first sign of a soon-to-be-chronic training injury like shin splints, the right answer often isn't clear until it's too late.

So the results of a study by researchers in Australia, published last month in the British Journal of Sports Medicine, offer a remarkably useful new tool. They've identified two simple tests, easy to self-administer at home, that predict your likelihood of developing medial tibial stress syndrome – better known as shin splints – in subsequent months. If you're ramping up your exercise program or starting a new one, you can use this early-warning system to make changes to your training before full-blown symptoms set in.

Shin splints cause sharp pain along the lower two-thirds of the shin, and are usually associated with high-impact activities like running, walking and dancing. The most recent evidence suggests the condition is a stress reaction of the shin bone, but researchers are still debating exactly what causes it and how to avoid it. The one thing they agree on is that it's an overuse injury associated with – as a recent review in Clinics in Sports Medicine put it – "too much, too fast, too soon."

The Australian researchers performed two tests on 384 cadets in the Australian Defence Force, then followed them for 16 months to see who developed shin splints. The "shin palpation test" involves squeezing the shin and surrounding muscles to see if any pain is present, while the "shin edema test" involves pressing a finger into the shin for five seconds to see if an indentation persists, which would indicate an accumulation of fluid under the skin.

Taken separately, the edema test was more reliable: If you test positive, you're almost certainly on the road to shin splints. But it also missed many cases. The palpation test, on the other hand, successfully predicted more cases of shin splints, while also producing more false positives.

Both tests are simple enough to perform on yourself, says Phil Newman, a professor of physiotherapy at the University of Canberra and the study's lead author. (Still, a recent pilot study in which high-school children administered the tests on themselves didn't produce good results – so read the instructions carefully.)

Once you've mastered the tests, the tougher question is what to do if you test positive.

"Rest from running and jumping is probably the best treatment," Newman said in an e-mail. "Unfortunately, the group that get this condition often feel they can't afford to rest."

At the very least, he recommends temporarily replacing 25 per cent of your high-impact activity with lower-impact exercises like cycling or swimming. Monitoring changes in the level of pain and edema in the screening tests every two to three weeks will give you an idea of when you can afford to start ramping your workouts back up and when you need to dial back.

There are many other proposed solutions to shin splints – most of which, Newman points out, have very little reliable evidence to back them up. Orthotic shoe inserts are one approach that has some evidence, he says. Strengthening the muscles around the shin and improving running form by shortening your stride are other promising interventions.

(In the absence of good peer-reviewed evidence, I'll share a strengthening exercise that helped in my own battles with shin splints. Put a towel on the floor; keeping your heel firmly planted, pull the towel toward you by scrunching your toes up. Repeat with both feet, and try pulling in the towel from different angles.)

The one thing you shouldn't do, Newman emphasizes, is nothing. Shin splints likely indicate that your bone is being damaged more quickly than it can be repaired, and ignoring the symptoms could allow it to progress to a more serious condition like a stress fracture.

Moreover, they're extremely hard to get rid of once you've got them – exactly the kind of condition where foresight trumps hindsight. 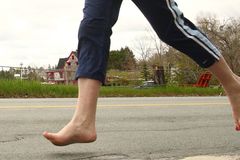 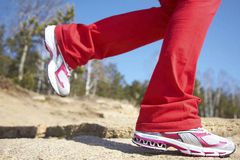