Alex Hutchinson draws on the latest research to answer your fitness and workout questions in this biweekly column on the science of sport.

What's the best way to figure out my maximum heart rate?

You've seen the charts on posters at the gym and on the control panels of cardio machines: Keep your heart rate in the right zone - warm-up, "fat-burning," aerobic and so on - to get the most out of exercise.

This is pretty sound advice, but there's one fundamental problem: In order to exercise at, say, 75 per cent of your maximum heart rate, you need to know what that maximum is. And despite what it may claim, your treadmill really doesn't know you that well.

The conventional wisdom, used by even the fanciest cardio machines, is that maximum heart rate is 220 minus your age. It's simple, easy to calculate and - unfortunately - wrong.

"It turns out there's not much scientific evidence for that formula," says Hirofumi Tanaka, head of the University of Texas's Cardiovascular Aging Research Laboratory. In fact, it was just a rule of thumb based on a few studies in the early 1970s that included smokers and patients on heart-disease medication.

A better formula, Dr. Tanaka has found, is 208 minus 0.7 times your age. But even that provides only a rough average, because there's so much natural variation in heart function. For about one in every three people, the formula will be off by more than 10 beats - enough to put you in a completely different exercise zone.

The only way to determine your personal max reliably, it turns out, is to actually get your heart pumping that fast. That typically requires a cardiac stress test. You can also get a decent estimate by wearing a heart-rate monitor during a five-kilometre race in which you gradually accelerate and finish with an all-out sprint.

Surprisingly, a series of studies by Dr. Foster and others over the past two decades has shown that the seemingly wishy-washy concept of "perceived exertion" is just as effective as heart-rate monitoring for distinguishing among training zones. In other words, paying attention to simple cues such as your breathing can tell you how hard your heart is working.

One simple gauge is the talk test, which says that if you can speak in complete sentences, you're in the aerobic zone, corresponding to less than about 80 per cent of maximum heart rate. This is the zone where athletes do about 70 per cent of their training, Dr. Foster says.

When you can only speak in short bursts, you've moved into the threshold zone, which is highly effective for increasing endurance, but can only be sustained for short periods. Finally, when you can only gasp out single words, you're in the highest zone.

This approach is actually a lot more accurate than the high-tech readout of a heart-rate monitor. As you get fitter, Dr. Foster notes, "your thresholds move with you."

And best of all, with spring in full force, it works outdoors.

Alex Hutchinson is a former member of Canada's long-distance running team and has a PhD in physics.

Your ability to carry on a conversation (out loud, not under your breath) is a good indication of what exercise zone you're in. How much time you spend in each zone will depend on your background and goals, but a typical program such as the one below should stay mostly in the aerobic zone. MAXIMUM ZONE:

How: Short bursts of 30 seconds to three minutes

Talk test: A few words at a time

Do you have a question about some aspect of your workout routine? Send it to jockology@globeandmail.com. Include your hometown and a daytime contact number so we can follow up with any queries. 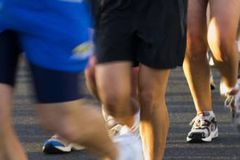 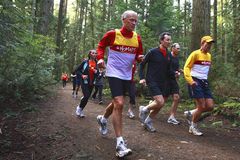