I was a hero last weekend. I didn't know it at first – I, along with 7,500 other runners, was just slogging through the 21.1 kilometres of the first annual Seawheeze half marathon in Vancouver put on by Lululemon.

While it was certainly the most stylish race I've taken part in – passersby could have been forgiven for thinking it was a Lululemon fashion convention – runners came in all shapes and sizes, old and young, fast and slow, male and (predominantly, for this race) female.

The hero part came in a few hours post-finish line, after I'd showered and napped and headed to a coffee shop for caffeine and carbs. My race bracelet was still on my wrist, and just before my sandwich showed up, two little girls dressed in purple approached me to congratulate me on my (far from best, in my eyes) attempt.

One was about three, the other perhaps eight, and you could see it in their eyes, the adulation. It turned out they were "Ivivva girls," associated with Lululemon's youth brand, and they'd spent hours in a cheering squad at about the eight kilometre mark in Kitsilano, encouraging us to keep going with dances, singing and cute signs. My favourite was "run hard, random adult."

I'm not a parent. I'm not even an aunt. I'm not used to being looked up to by children, no less children I've never met before. Maybe it was just the post-race and pre-panini exhaustion taking over, but I got a little emotional. It made me realize that while gold medals are wonderful and all, it's us real people who have to set the true examples to children – not of becoming world-class athletes, but of becoming active, healthy adults.

"There's no doubt in my mind that the most important influence of the healthy, active living behaviour of our kids has been ours [as parents]," says Mark Tremblay, chief scientific officer of Active Healthy Kids Canada and a father of four. "They see you go out and run or golf or play soccer and they emulate that."

"The norm is that we as adults come home and sit in front of a screen in our discretionary time," says Dr. Tremblay. "The kids are emulating us very well."

Parents are certainly not the only adults kids look up to – "it depends on the kid," Dr. Tremblay says.

He is quick to point out that many children idolize athletes, superheroes and movie stars and will spend hours acting out their role model's behaviour, whether it's running around in a cape for hours like Batman or, as Dr. Tremblay himself did in his youth, spending a whole summer going jogging at 6 a.m. in imitation of Rocky.

But the truth is, though we hate to admit it, children really do turn into their parents much of the time, and health behaviours are a major part of that development, Dr. Tremblay notes. Children of smokers, he points out, are more likely to become smokers themselves.

The trick is in normalizing behaviour, in teaching children that getting daily exercise is as important as eating dinner, showering or brushing your teeth.

Dr. Tremblay and his wife, for instance, will go for a run during their kids' hockey practice, rather than simply sitting in the stands and snacking. "We'll get back from the run and we're all sweaty just like they are," he says. "That's got to send a behavioural message to the kids that we value healthy living."

Back to the coffee shop, and my young friends, who invited me over to their table, where I had a chat with their mother on my way out.

We commented on what a different world these girls were growing up in from what we and our mothers saw, and on how normal it is to them for adult women to participate fully in sports, whether it's running half marathons or winning Olympic bronze medals in soccer.

I walked out with a sense of empowerment and a little more bounce in my step, knowing that I'd made a contribution, however small, to modelling healthy behaviour to the children who saw me – and that the same thing would happen every time I laced up my sneakers and ran out the door. 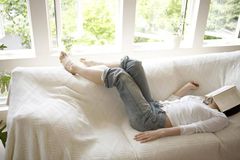 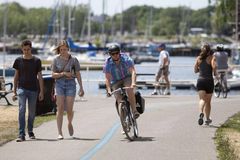