The morning scramble: As Rachel Zajano and her husband struggle to get their three kids and themselves off to work in Copenhagen, they go through a struggle familiar to parents everywhere. "It's all hands on deck for breakfast and packing bags," she says, "stressful, yelling, getting everyone out the door."

And then everyone gets into their bicycle seats. The family of five travels to school and work almost every day on two wheels – some days including a three-wheeled cargo bike. From their apartment in the neighbourhood of Osterbro, Zajano travels about nine kilometres to her office in an out-of-the-way industrial area while her husband, Andrew Hayden, heads to his workplace.

"Here, everyone cycles, so it's not a novelty at all," says Zajano, an American who works in IT for a fashion company. "Danes treat their bikes like vacuum cleaners: a tool to get the job done." More than 50 per cent of commuting trips within the city are on bikes – the highest such ratio in the world.

"It's nice feeling connected to the community that we live in, and cycling is a great way to do that," Zajano says, adding the biggest stresses on her commute are bike traffic jams and a heavy wind. "Every single day I see friends on the street, or on our bikes.

A[n] unexpected quick smile and a hello can improve one's mood greatly. It's nice when you see other people having these similar moments with their friends."

This climate didn't emerge by itself. Copenhagen has made a sustained policy effort to encourage cycling as a routine mode of transport, including a network of safe, separated bike routes that span the city and now extend beyond it. The Danish capital has an important lesson for cities looking at cycling: It is entirely possible to get ordinary citizens – and their kids – on two wheels.

"The basic tool is to create safe and convenient infrastructure," explains Marie Kastrup, bicycle program manager for the City of Copenhagen. "You create infrastructure where cyclists can go easily and quickly from A to B."

The city – physically smaller than the city of Vancouver – now has almost 400 kilometres of separated bike lanes; some include priority traffic signals, designed to allow cyclists to cross the city at a comfortable pace without hitting a red light. And those lanes are the first ones to be cleared after a snowfall.

The city of Copenhagen has linked up with 22 nearby municipalities to build a set of "cycle superhighways," more than 300 kilometres' worth, to link downtown neighbourhoods with the region's suburbs: Some corridors will reach more than 20 kilometres.

Getting around on these routes, for many families, means using a cargo bike, which attaches a two-wheeled box to the back of a standard adult cycle that can hold groceries or seat up to two children. In North America, these are available but rare, but not here. "They are the Copenhagen SUV," says Mikael Colville-Andersen, an urban mobility expert and CEO of the urban design firm Copenhagenize. "Twenty-six per cent of families with two kids or more have a cargo bike."

This is crucial, because despite the considerable income of most Copenhageners, only 22 per cent of households own a car. "You do need a solution for moving the little rugrats around," he says. "And then you teach them to ride really young, because you want to get them out of the damn cargo bike."

At the same time, owning and operating a car is wildly expensive; gas taxes are high, and new cars have a national sales tax of up to 150 per cent. This is the stick that accompanies the carrot of pleasant urban cycling – and pushing citizens out of cars and onto bicycles is an explicit policy goal: It also serves Copenhagen's target of being carbon-neutral by 2025, improves public health and, by the way, lessens traffic.

Morten Kabell, a senior elected official who has the very Danish title of Mayor of Technical and Environmental Affairs, frames the issue in stark terms. "Ten people on bikes need less space than 10 cars," he says, and more than 300,000 people in the city commute by bike. "Just imagine if these Copenhageners decided to take a car to work or school every day," Kabell says. "Traffic would break down totally, and this is why we need to get more people cycling and less people choosing the car."

It wasn't always this way. While Denmark had a strong culture of urban cycling by the 1930s – a practice imported from Britain, as Kastrup points out – car culture hit, just as it did in North America, and by 1960s just 9 per cent of Danish commuters were on bicycles. But the oil crisis of the 1970s and a strong political push toward sustainability led to a transformation. "It was both top-down and bottom-up, a rare synthesis," Colville-Andersen says.

The urban designer also makes his eight-kilometre commute on two wheels almost daily with bicycle lanes that start outside his apartment. "Regular citizens like me are healthier; they live longer," he says, making a point that's supported by a large body of social-science research.

The transformation of Denmark and its largest city to a haven of urban cycling has come only in the past 35 years. And that is significant, says Andreas Rohl, the former head of mobility and urban space at the city. "In Copenhagen, cycling was turned around while there was still a strong cycling culture to build on, when the city began to change its traffic management around 1980," says Rohl, who now works as an associate at Gehl Architects.

This history, for Canadian observers, cuts both ways. On one hand, the car-oriented infrastructure of our cities means we have a long way to go; the most bike-friendly major city, Vancouver, sees about 4 per cent of trips made by bike.

On the other hand, Copenhagen – and Amsterdam, which has a similar history in this respect – often seems to North Americans as though it has some special genius loci that enables urban cycling. "Yes, that it's in our DNA!" Kastrup says with a weary laugh. "I hear this idea often."

This, she says, is not so. The topography is flat, true, but there is no magic.

"It's about looking at your city and your system," Rohl adds. "If there's an ambition to make cycling stronger, you need to make it more competitive in the normal ways. For many people, the decision is about convenience, and that is about travel time."

That is even true in winter, when about four-fifths of Copenhagen's cyclists continue to ride. Its mild winters help: The region sees limited snowfall and average temperatures around 0zero.

From a North American perspective, bike commuting often feels like an idealistic, even quixotic act. "The big mistake people make," Colville-Anderson, who grew up in Calgary, says, "is that they don't think about who could be riding bicycles. For now, it's the young and the fit. But 20 per cent [of trips by bicycle] in Toronto is feasible, if you think about all the people who are going to work and have the willingness to cycle, but are just looking for a secure way to get there."

Once that condition is met, all sorts of psychological barriers start to shift. Zajano and Hayden are both American; when they settled in Copenhagen half a decade ago they decided not to buy a car, partly, Zajano says, because they weren't sure how long they would stay. Within a couple of years they were settled, and she was in labour with her second son. "So my husband cycled me to the hospital in the cargo bike," Zajano recalls. "I sat in the front."

Editor's note: An earlier version of this story incorrectly identified Morten Kabell as a senior city administrator. This version has been corrected.

Three families share their stories about getting around on a bicycle
March 23, 2016
Pilot project for bike lanes on Bloor Street could open by summer
March 8, 2016 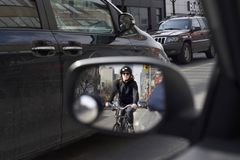 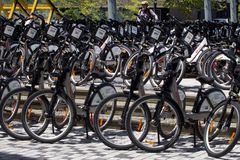 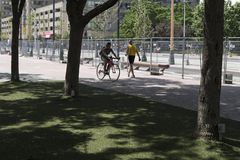