By the time he reached the closing stages of the Tor des Géants, an epic mountain race held every September in the Italian Alps, Guillaume Millet had run more than 300 kilometres and crossed mountain passes totalling 24,000 vertical metres – the equivalent of climbing (and descending) Mount Everest three times over. He'd slept for just three of the previous 87 hours.

"At the end of the race," the University of Calgary exercise physiology professor recalled during a conference presentation earlier this month, "I wasn't sure if I was running or dreaming."

In addition to living it first-hand, Millet is one of a small band of scientists who studies the extraordinary demands of "ultraendurance" racing, a booming subset of the endurance world that is often said to begin at 42.2 kilometres, where official marathons finish. Participation in ultrarunning races has doubled since 2009, and other ultradistance events such as cycling, cross-country skiing and Ironman triathlons are also growing rapidly.

But research and advice about what it takes to make it to the finish line remains surprisingly sparse.

In early September, Millet and other ultra researchers shared their latest findings at the Endurance Research Conference, a three-day gathering hosted by the University of Kent in Britain. Drawing on gruelling lab-based experiments and fieldwork at events such as the 139-day Race Across USA, they made the case that an ultra race isn't just an extra-long marathon.

"It's more complicated," Millet says. "That's probably why I like it so much: it's more interesting."

Success at shorter distances can be predicted from a fairly simple set of physiological measurements such as your heart's ability to transport oxygen to your muscles, the efficiency of your running stride and your ability to preload your muscles with fast-burning carbohydrate. To succeed in an ultra, Millet says, it may be worth compromising on some of these goals to get more ultraspecific benefits.

For example, one of biggest problems encountered by ultrarunners is muscle damage in their legs from the accumulated pounding of tens or hundreds of thousands of steps. One approach to minimizing muscle damage is to run with a higher cadence (faster, shorter steps) and land on your heels: you may be a little less efficient, but you'll still be moving forward after 10 hours.

Similarly, thickly cushioned shoes add weight, which reduces efficiency, but may lessen muscle damage – which explains why super-cushioned Hoka One One shoes have become popular in the ultra community.

It's also worth noting, Millet points out, that having thick, muscular legs may be an advantage in withstanding muscle damage over longer distances, in stark contrast to the pipe-cleaner legs common among the fastest runners in the marathon and shorter races. That means those of us not born with the "ideal" running body may still find success at longer distances.

Prerace carbohydrate storage is also less important for longer distances, because you're going to need to refuel no matter what. As a result, the most important ultraspecific trait is the ability to eat substantial amounts of food during the run without throwing up or succumbing to other gastrointestinal problems.

So far no one has found a magic formula that works for everyone, but many ultrarunners have experimented with higher-fat diets to increase their reliance on the body's virtually inexhaustible fat stores – another approach that doesn't work well at shorter distances.

Perhaps the biggest differences, though, are in the head. You've got hours alone with your thoughts, and what you say to yourself has an enormous impact on your performance, according to another presentation at the conference.

University of Kent researcher Alister McCormick presented interim results of a study in which ultrarunners are either taught to use motivational self-talk ("Feeling good … push through this!") or given an alternate psychological intervention focusing on concentration prior to a 60-mile self-supported overnight race. With 21 subjects analyzed so far, the self-talk group has run an average of 25 minutes faster than the control group, suggesting that the technique is likely effective. That's no surprise to Dr. Bryce Carlson, an anthropologist at Purdue University and the co-ordinator of a multidisciplinary research project looking at runners in the Race Across USA, who slogged from Huntington Beach, Calif. to Chesapeake Bay earlier this year, averaging a marathon a day for nearly five months. Researchers monitored the runners' biomechanics, heart function, diet, sleep (Millet is analyzing that data) and other measurements; the first results are expected next spring.

Carlson, perhaps not surprisingly, served as one of his own guinea pigs, completing the run in second place with a cumulative time of 512 hours and 10 minutes. As important as all the physiological details are, he says, nothing matters more than mindset. That's the advice he gives to those who are contemplating their first foray into the ultra world.

"If it sounds appealing, I'd say do it," he says. "Whatever training plan will get you to the starting line healthy and confident, you're 80 or 90 per cent of the way there." 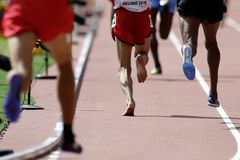 Humans are hard-wired for laziness, study finds
September 13, 2015
Follow Alex Hutchinson on Twitter @sweatscience
Report an error Editorial code of conduct
Due to technical reasons, we have temporarily removed commenting from our articles. We hope to have this fixed soon. Thank you for your patience. If you are looking to give feedback on our new site, please send it along to feedback@globeandmail.com. If you want to write a letter to the editor, please forward to letters@globeandmail.com.
Comments