If you're vying for gold in a sport that demands a lot of huffing and puffing, you'd think that asthma would be a pretty significant disadvantage. But if trends from recent Olympic Games hold true, about 700 of the 10,000 athletes currently competing in London have confirmed asthma diagnoses – and those athletes will be twice as likely to medal as their non-asthmatic peers.

This "asthmatic advantage" was once thought to result from the performance-enhancing effect of asthma drugs. But recent research at the University of British Columbia and elsewhere has debunked this theory, shedding light instead on the link between intense exercise and respiratory function, and on the crucial role of a good warm-up for managing exercise-induced asthma without drugs.

For most of the past decade, Olympic athletes had to get special permission to take salbutamol (the asthma drug sold in inhalers as Ventolin). That rule changed last year, so that athletes in London can take salbutamol with no restrictions, thanks to studies like the one conducted by Sarah Koch and Michael Koehle at the University of British Columbia's Environmental Physiology Laboratory, funded by the World Anti-Doping Agency.

They tested 42 elite cyclists, 10 of whom had "exercise-induced bronchoconstriction" (the correct term for asthma-like symptoms triggered by exercise). Each cyclist performed two 10-kilometre time trials, with or without drugs, in a double-blinded design. The result: no differences in finishing time, even for the asthmatics.

Previous studies had found that certain genetic variants cause people to respond to salbutamol in different ways, raising the possibility that some athletes might gain an advantage even though the average effect was zero. But when Ms. Koch and Dr. Koehle tested their subjects for three key gene variants known to affect salbutamol response, they again found no differences in time-trial performance.

With the genetic theory ruled out, the most likely explanation for the asthmatic advantage is that the incidence of asthma-like symptoms increases in athletes who have done the most training over the longest period of time, due to environmental stresses. It's actually not surprising, Dr. Koehle points out, that these athletes are also more likely to win medals.

Indeed, studies suggest that prolonged breathing of dry or polluted air and exposure to chlorine byproducts puts stress on the airways, and can ultimately damage them. At the 2008 Olympics, 17 per cent of cyclists had asthma diagnoses, and these athletes won 29 per cent of the medals; in swimming, the figures were even higher: 19 per cent and 33 per cent, respectively. For winter athletes, Zamboni fumes at indoor arenas are thought to be another key trigger.

If this is true, you'd still expect salbutamol to help affected athletes, even if it doesn't give a boost to healthy athletes. So why did the UBC study find no discernible effect? Dr. Koehle offers a surprisingly simple explanation: The subjects in his and other studies all had thorough warm-ups before their exercise tests, making them less likely to suffer an asthma attack whether they received the drugs or the inactive placebo.

It turns out that asthma attacks produce a "refractory period," during which the airways become temporarily immune from a further attack. As a result, a warm-up that is sufficiently long and intense to sensitize the airways may allow athletes to get through their competition or time trial without suffering an attack.

Most elite athletes already do this kind of warm-up as a matter of course, but others can benefit too. "With a better warm-up, you can get away with less drugs," Dr. Koehle says.

More generally, a recent article in the British Journal of Medicine reported that "regular, moderate exercise can improve your asthma and also your immune system, which can also help avoid asthma attacks."

This marks a shift from outdated advice in which asthmatics were warned to avoid exercise – and is probably the most important message to emerge from the flurry of research sparked by fears of performance-enhancing puffers. Sensitive airways may be an occupational hazard for Olympic endurance athletes, but for most of us – even those with asthma – exercise remains a crucial way to keep your lungs and airways working properly.

If you suffer from exercise-induced asthma, a proper warm-up can trigger a "refractory period," which prevents your airways from narrowing during exercise. Some key elements:

Total duration should be at least 20 to 30 minutes.

Start with a gentle jog, cycle or swim, and gradually increase the pace.

Include several bursts at 80 to 90 per cent of maximum intensity, each lasting two to five minutes.

Alex Hutchinson blogs about research on exercise atsweatscience.com. His latest book is Which Comes First, Cardio or Weights? 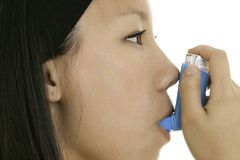 Vitamin D could protect your unborn child from asthma
March 30, 2007
Study links asthma to magnetic-field exposure of pregnant moms
August 1, 2011
Follow Alex Hutchinson on Twitter @sweatscience
Report an error Editorial code of conduct
Due to technical reasons, we have temporarily removed commenting from our articles. We hope to have this fixed soon. Thank you for your patience. If you are looking to give feedback on our new site, please send it along to feedback@globeandmail.com. If you want to write a letter to the editor, please forward to letters@globeandmail.com.
Comments