Will I get a better workout by walking, running or biking my 5K commute to work?

Most commuters strive to be as efficient as possible. To get the best workout (specifically, to burn the most calories), you're better off being inefficient.

Of course, "efficiency" has multiple meanings. The bike ride will take 15 minutes, while the walk will take close to an hour. If you have an hour to spend, you could take a detour on the bike and burn over 500 calories.

Running is the most time-efficient, vigorous workout

These sorts of trade-offs can be confusing when evaluating different types of exercise. Here's the lowdown on the most common forms of person-powered commuting:

The dominant factor in outdoor biking is air resistance, which gets increasingly important the faster you go. It accounts for 90 per cent of the resistance you feel at racing speeds above 30 kilometres per hour.

This means that if you bike too slowly it will be even less taxing than a brisk walk. But it also means that cranking up the cadence can quickly make it harder.

Hills and frequent stops can also make the bike commute more of a workout. Because of the trade-off between air resistance and gravity, the most efficient strategy is to push a bit harder on the uphills (when your speed is already reduced) and recover on the downhills.

Biking is the most practical commuting option for any distance beyond a few kilometres. But it takes conscious effort (along with, perhaps, a shower at work and a de- tour on the way home) to turn it into a really good workout.

Each of us has an "optimal" walking speed that feels comfortable and burns the fewest calories per kilometre. Walk-ing significantly faster than that optimal speed can actually be as fast and calorie-intensive as a very slow run, but it quickly becomes uncomfortable to sustain. That's why, with all due respect, race-walkers are so funny to watch.

Unlike a gym workout, the length of your commute is determined by distance rather than time. Chalk that up as an advantage for walking, which will keep you out there the longest - but make it a brisk walk that requires effort.

There's a long-standing misconception that propelling yourself on foot from point A to point B takes a set number of calories no matter how fast you move.

"It sounds counterintuitive," says University of Wisconsin researcher Karen Steudel, "but that was just the dogma. It was what everyone 'knew.' "

A 2004 study in the journal Medicine & Science in Sports & Exercise showed clearly that running at six minutes per kilometre burns about twice as many net calories as walking at 12 minutes per kilometre. The difference comes in part from the up-and-down motion of the running stride.

Commuting as a runner is a much greater logistical challenge; not only do you have to shower, but you need to organize (and perhaps schlep in a backpack) clothing and possibly lunch, as well as decide how to get home. But there's no more time-efficient way to fit in a vigorous commuting workout.

Alex Hutchinson blogs about research on exercise and athletic performance at http://www.SweatScience.com.

Walking poles have been making the transition from alpine trails to urban paths in recent years, adding an upper-body component to the walking workout. There has been a flurry of studies on "Nordic walking," as it's called, suggesting that using poles results in higher heart rate, more oxygen use and a quicker pace.

On the other hand, Thorsten Schiffer and his colleagues from the German Sport University Cologne recently determined that the poles don't do anything to push you forward on flat terrain. "The work of the upper extremities seems to be a luxury effort for Nordic walkers," he concluded.

More research is needed, but it appears that the poles won't help you reach your destination any sooner, but might help burn a few extra calories and keep your arms working.

What type of exercise is best for maintaining strong bones?
May 22, 2009 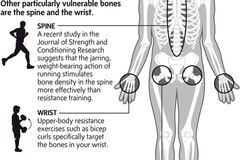