Given the number of cyclists in this year's Tour de France who have skidded off mountain passes, been sideswiped by passing cars or catapulted into barbed-wire fences, it's obvious that riding in the Tour can be hazardous to your health.

But what about the riders who make it to the finish line in Paris, having covered 3,430.5 heart-pounding, leg-draining kilometres in three weeks? Does their gruelling training regimen make them healthier, or does too much of a good thing leave them worse off? Medical opinion has flip-flopped over the years as our understanding of the heart's response to exercise has increased, but a new study on the most important outcome of all - staying alive - suggests that Tour riders do better than average.

Researchers at the University of Valencia in Spain collected birth and death data on 834 cyclists who rode in the Tour between 1930 and 1964, representing the majority of competitors from France, Italy and Belgium during those years. They compared the data to average figures for people born in those countries in the relevant years, publishing the results in the International Journal of Sports Medicine. The finding: Median age of death was 73.5 years for the controls compared to 81.5 years for the cyclists, and the mean lifespan was 17 per cent longer for the cyclists.

These results offer a surprising counterpoint to recent suggestions that prolonged, intense endurance training over many years can leave signs of "fibrosis" - scarring - on the heart. British researchers recently examined 12 elite runners and rowers with an average age of 57, who each (on average) had accumulated 43 years of continuous training and completed 178 marathons, 65 ultramarathons longer than 80 kilometres, and four Ironman triathlons. Six of the 12 veteran athletes showed signs of fibrosis, compared to none of the 20 age-matched sedentary controls.

In non-athletes, this fibrosis is often associated with potentially dangerous arrhythmias - but it's not clear that the same changes correspond to increased risk for athletes, whose hearts are significantly different compared to their sedentary peers. Runner's World editor-at-large Amby Burfoot expressed his skepticism in response to a recent German study that hinted at similar heart changes in marathoners: "If you think you've got something," Mr. Burfoot wrote, "show me the bodies in the streets."

On that score, the research is reassuring. A 2009 study from Lawrence Berkeley National Laboratory in California followed 35,402 runners for 7.7 years, during which time 467 suffered heart attacks or other serious heart problems and another 54 died of heart disease. The risks of all these symptoms declined with every additional daily kilometre run, so that those running more than nine kilometres per day were 65 per cent less likely to suffer from angina, and 29 per cent less likely to suffer from heart disease compared to those averaging three kilometres per day - the level corresponding to most public-health recommendations.

Still, it's extreme outliers such as Tour de France cyclists, who cover 30,000 to 35,000 kilometres a year in training, who would be most at risk from fibrosis. The fact that these cyclists live 17 per cent longer is encouraging, though it can't establish cause and effect, lead author Mari Carmen Gomez-Cabrera acknowledged in an e-mail. It's well known that former athletes are more active, smoke less and drink less alcohol than the general population, which could contribute to the difference in longevity.

There's also the possibility that the people who choose to become professional cyclists are predisposed to long, healthy lives. However, a Swedish study of 100 world-class male endurance athletes, published last year in the British Journal of Sports Medicine, found no difference in their genetic risk factors for heart disease, hypertension, cancer and other major killers compared to non-athlete controls.

Ultimately, much remains to be discovered about exactly how the body responds to heavy training, and about the significance of potential risk factors like cardiac fibrosis. But in a world where every action has risks and benefits, Dr. Gomez-Cabrera's findings tell us that, even for extreme athletes, exercise's net effect is for the good.

That doesn't mean that everyone should train like Ryder Hesjedal, she cautions.

"We believe that, for the general population, exercise should be prescribed like a drug," she says. That means people who are older, unfit or suffer from conditions such as diabetes might get the greatest benefit from a relatively small dose - but the maximum safe dose is much, much higher than we've been led to believe.

Alex Hutchinson blogs about research on exercise at sweatscience.com. His new book - Which Comes First, Cardio or Weights? - is now available.

Why your warm-up may be hurting your workout
June 5, 2011
Why exercising on an empty stomach can mean a better workout
May 15, 2011 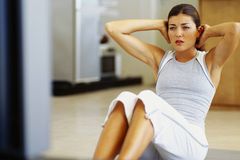 Sorry, folks, but you have to diet - and exercise
June 12, 2011
Follow Alex Hutchinson on Twitter @sweatscience
Report an error Editorial code of conduct
Due to technical reasons, we have temporarily removed commenting from our articles. We hope to have this fixed soon. Thank you for your patience. If you are looking to give feedback on our new site, please send it along to feedback@globeandmail.com. If you want to write a letter to the editor, please forward to letters@globeandmail.com.
Comments