In less than five years, sales of gluten-free products have nearly tripled, rising in tandem with the increasing number of new gluten-free goods. Beyond crackers, breads and pastas, it's now possible to buy everything from gourmet gluten-free cookies at independent bakeries to gluten-free pizzas at restaurant chains such as Boston Pizza.

According to the Rockville, Md.-based research firm Packaged Facts, U.S. retail sales of gluten-free products reached $2.6-billion (U.S.) in 2010, up from $935-million in 2006. And in its 2011 Gluten Free Foods and Beverages report, the firm predicts sales will grow to $5.5-billion by 2015. A similar trend is under way in Canada, although precise national figures are not available.

It's official: Gluten-free, once considered part of the dietary fringe, has gone mainstream. But the question is how long will the mainstream appetite for these products last?

The incidence of celiac disease, an autoimmune disease that requires patients to eat a gluten-free diet, is believed to be four times as common today as it was 50 years ago. But representing only about 1 per cent of the population, those with celiac disease clearly aren't the only ones propelling the market's growth.

An unknown number of people who suffer from allergies and other intolerances to the protein are also snapping up gluten-free products, while others are adopting a gluten-free diet for its perceived health and weight-loss benefits.

"It's supertrendy right now," says Delainy Mackie, founder of the Gluten Free Epicurean bakery service in Vancouver. Although Ms. Mackie started her business in 2009 to cater to people with celiac disease , like herself, her organic, gluten-free cookies, Nanaimo bars and sausage rolls have won over a small but growing non-celiac client base.

"I think people are associating it with being healthy, which in some cases is very true," she says. "I think there's a big stigma around wheat."

At the Big Carrot in Toronto, the city's largest independent natural-food store, the number of gluten-free products on the shelves has grown by about 10 per cent over the past three to four years, public relations co-ordinator Patrick Conner says. And new gluten-free products are being introduced all the time, he says, adding that as more manufacturers enter the market, the prices of gluten-free goods could start to decline. (Currently, a loaf of gluten-free bread can cost roughly $7 to $8.50.)

While the overwhelming variety of new gluten-free products may be great news for those with dietary restrictions, Melissa Abbott, director of culinary insights at the Hartman Group research firm in Bellevue, Wash., sees it as an indication the market is nearing its saturation point.

"This is a sign that the gluten-free trend is about to level off," Ms. Abbott said in an e-mail.

Her assessment echoes her research firm's 2009 report, titled Gluten Free: Context, Insights and Predictions, which saw gluten-free as something of a passing fad.

"Taking a longer-term perspective, we believe that gluten-free will prove to be more reminiscent of fad dieting such as low carb, and as such does not represent an enduring mainstream trend," it said. "While there will remain a small, permanent marketplace for gluten-free products, we do not believe this represents significant opportunity for manufacturers, retailers or food service in the long term."

The report predicted the interest in gluten-free dieting will peak at about 2012, and begin to peter out, as fad dieters and those interested in health and wellness drop away. A major reason why mainstream interest may wane is many gluten-free products aren't necessarily healthy. The Hartman Group noted products such as gluten-free cereals and baking mixes are often composed of potato starch, tapioca starch and white rice flour - ingredients that tend to be low in nutritional value.

"It's kind of like Tofurky; tofu is tofu, Tofurky is fake turkey. Other grains are not meant to be breads," she says, noting such foods should be eaten only as treats, not as staples.

The gluten debate: cutting the wheat from the chaff
February 1, 2011 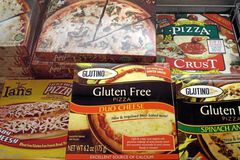 What to feed the family?
June 8, 2010
Celiac disease: an elusive 'iceberg'
July 9, 2008
Follow Wency Leung on Twitter @wencyleung
Report an error Editorial code of conduct
Due to technical reasons, we have temporarily removed commenting from our articles. We hope to have this fixed soon. Thank you for your patience. If you are looking to give feedback on our new site, please send it along to feedback@globeandmail.com. If you want to write a letter to the editor, please forward to letters@globeandmail.com.
Comments