If you want to keep excess snacking at bay, include enough protein in your diet. That's the take-away message from a new study that investigated how the amount of protein consumed affects calorie intake and hunger.

People who followed a lower protein diet – 10 per cent of daily calories – consumed more calories each day than when they consumed a 15-per-cent protein diet. What's more, the calorie increase was enough to cause a roughly two-pound weight gain each month.

It's thought that the protein content of our diet can determine our calorie intake and thus may play a role in the obesity epidemic. The "protein leverage hypothesis" contends that when we're faced with a lower protein diet, we increase our calorie intake in an effort to maintain a consistent protein intake.

In other words, dilute the protein content of your diet with fat and/or carbohydrate and you'll gobble up more calories each day in search of missing protein and, ultimately, gain unwanted pounds. Given our increasing reliance on processed foods that are typically high in fat and refined carbohydrate, this theory may not be unrealistic.

To test the protein leverage hypothesis, researchers from the University of Sydney in Australia fed 22 healthy, lean men and women three diets, each for four days: 10-per-cent protein, 15-per-cent protein and 25-per-cent protein. The diets were made as similar as possible with respect to palatability, availability, variety and appearance.

Each four-day diet contained the same foods only differing in their protein content. "Meal time foods" were available only in a meal sitting whereas "any time foods" were snack foods to which participants had free access at all times.

Increased hunger on the lower protein diet seemed to drive food intake. On the 10-per-cent protein diet, participants reported a greater increase in hunger one to two hours after eating breakfast than on the higher protein diets.

It's becoming clear that protein plays an important role in weight management. Including protein at meals delays hunger and prolongs the time until your next meal.

Getting enough protein also helps preserve muscle mass as we age. Having less muscle means your body burns fewer calories at rest – a recipe for incremental weight gain if you don't cut calories to compensate.

Protein-rich foods include meat, poultry, fish, eggs, beans, lentils, tofu, soy products, milk, yogurt and cheese. The acceptable healthy range for protein intake is 10 to 35 per cent of daily calories for adults (10 to 30 per cent for children and teens).

What does a 15-per-cent protein diet look like? For a 2,000-calorie diet, you need 75 grams of protein a day – an amount you get by consuming six ounces of chicken, two cups of milk and one-quarter cup of almonds.

If you're a vegetarian consuming 1,800 calories a day, you need 67 grams of plant protein. To meet protein needs you'd have to consume one cup of lentils, one soy burger, three cups of soy beverage and one-quarter cup of roasted soy nuts.

A 1,400 calorie weight-loss diet would contain 52 grams of protein – the protein equivalent of roughly four ounces of salmon, one cup of Greek yogurt and two egg whites.

Older adults should also ensure they consume one to 1.2 grams of protein for each kilogram of body weight to slow age-related muscle loss.

Include protein at all meals and snacks, especially breakfast. Eating lean protein at breakfast appears to keep your appetite in check longer than if eaten at other times of the day.

Leslie Beck, a Toronto-based dietitian at the Medcan Clinic, is on CTV's Canada AM every Wednesday. Her website is lesliebeck.com .

Trying to cut calories? Up the protein first
August 16, 2011 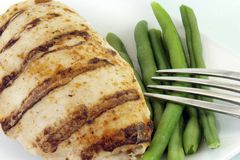 Are protein shakes the weight-loss magic bullet?
November 7, 2010
12 ways to add legumes to your diet
September 20, 2011
Follow Leslie Beck on Twitter @lesliebeckrd
Report an error Editorial code of conduct
Due to technical reasons, we have temporarily removed commenting from our articles. We hope to have this fixed soon. Thank you for your patience. If you are looking to give feedback on our new site, please send it along to feedback@globeandmail.com. If you want to write a letter to the editor, please forward to letters@globeandmail.com.
Comments