As the saying goes, bad habits are incredibly hard to break. Usually an unpleasant revelation is needed to wake people up to the need for change. In health care, where antibiotics have been improperly seen as the first line of defence against infectious disease rather than the last resort, that moment came in 2011 when researchers discovered a strain of gonorrhea capable of resisting all known recommended antibiotics. Public health officials had no choice but to accept the error of their ways and change strategy. Today, in order to save antimicrobials for the future, they have been relegated to be the last resort. And now, it seems, it's agriculture's turn.

For decades, the use of antibiotics for purposes other than prevention, control and treatment of animal-based infections has raised concerns over the development of antimicrobial-resistant strains that could end up in the human population. However, there had been little to no evidence to suggest this actually happens. But in the past few months that changed, thanks to a bacterium known as Staphylococcus aureus Clonal Complex 398 (CC398).

The bacterium was first identified a decade ago in both pigs and pig farmers, and over the years was associated with clinical infection in humans working on farms. But, while this back-and-forth contamination and spread was to be expected, there was little indication CC398 would pose a concern in any other environment.

In 2009, that theory was quashed as the bacterium was found in individuals residing in the non-farming community of Manhattan. By 2010, surveillance suggested the bacterium could be found in the general human population. Although disconcerting, the overall risk to health care where it could do the most damage, was considered minimal at best.

That, too, has now changed. In September of this year, a British team of researchers explored the history of CC398 at the genetic level. After looking at dozens of isolates from both human and livestock origin, they found two significant outcomes. The first was the presence of the bacterium not only in the blood of individuals in hospitals but also in the environment. The second was the realization all the isolates had a common livestock origin.

The discovery may not be surprising to those pushing for an end to antibiotic use in agriculture. In a world where zoonotic transmission of infections make up some 60 per cent of all human infections, the chance for spread of resistant microorganisms from animals to humans would be expected. But for the industry as well as the regulators, this may be seen as the wake-up call needed to turn away from widespread antibiotic use.

In Canada, where CC398 has been found but not yet in humans, the move to restrict the use of antimicrobials in agriculture is well on its way. In April of this year, Health Canada sent out a notice revealing its intent to tighten regulations. Based on the document, the most medically important antimicrobials will be restricted for use only to prevent, control and treat infections. Moreover, the use of these drugs will be done with the oversight of a veterinarian.

The regulations are planned to go into effect by 2017 – which may appear to be a long time from now but, in the context of the needs of agricultural producers, is relatively short. In order to comply with the regulations, producers have to find novel ways to maintain animal health and economic sustainability while losing one of their greatest chemical helpers. The process will not be simple and will require a combination of efforts. From an animal-health perspective, this will mean exploring alternatives to antibiotics to improve immune function as well as various options to reduce stress levels.

In the human arena, education initiatives need to be implemented to help the industry acclimatize to the fact they will not have their go-to option for much longer. The stakeholders need to be made aware a balance is needed between profits and the well-being of the Canadian public. But most important, those who wish to continue using antibiotics need to realize we are approaching – if not already in – the postantibiotic era; without prudence in use, these once-heralded weapons against disease are destined for extinction.

The CC398 findings offer a clear reminder of the problems faced without prudence and/or abstinence in antibiotic use in agriculture. But will they be enough?

Based on history, the answer may not be positive. Come 2017, there may be a relaxation of the regulations and possibly even an extension.

But there is a way the public can help: Support antibiotic prudence and/or abstinence wherever possible. A number of farmers, producers and even fast-food restaurants have already chosen to provide food from animals raised either without medically important antibiotics or any antibiotics whatsoever. These early adopters have provided a publicly available opportunity to speak out on the issue using not words but our wallets. Each purchase made to support reduction of antibiotic use in agriculture can help make a difference by promoting change in both policy and practice.

Let's face it: In Canada, money talks. By voicing your economic choice, industry and government will hear you loud and clear. With any luck, in combination with CC398, the pressure will persuade agriculture to finally kick this dangerous habit.

Jason Tetro is a Toronto-based microbiologist with over 25 years experience in research. He is a self-described germs relationship therapist and strives to improve humanity's bond with the unseen world. He writes for national and international media outlets and is often found on social media where he shares his unique views on microbial health. His science bestseller, The Germ Code is out now. You can follow him on Twitter at @JATetro

Is it healthier to drink grass-fed or organic milk?
September 22, 2014 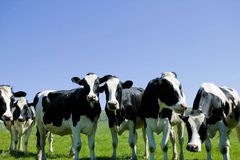