Sex makes a baby. But babies can be bad for sex.

Six weeks after a child is born, most women are given the green light to resume sexual activity as long as the typical healing-signs of delivery – whether a vaginal or a cesarean birth – are evident, and the couple have considered contraceptive options.

But how often do couples leave that six-week postpartum appointment and jump in the sack?

Researchers at the University of British Columbia, University of Toronto and Dalhousie University have been studying how sex is affected by pregnancy, delivery and the transition to parenthood, and this means we have concrete data to answer some of the many questions new parents have about whether they will ever regain that lost lovin' feeling.

For new mothers, an unpublished study led by Dr. Natalie Rosen at Dalhousie University (to be presented in June) found that the most pressing sex-related concern was the drop in sexual frequency, followed by concerns about body changes, worries about physical recovery and the effects of sleep deprivation.

New dads were also most bothered by the change in sexual frequency, but they were also concerned about their partners' mood swings, the effect of breastfeeding on their attitudes toward their partner's breasts and about a mismatch between their and their partner's sexual desire. These concerns affected 80 per cent of new parents, and half of those asked said they felt troubled by more than a dozen of these concerns, which further reduced their sexual functioning.

As a clinician working with women who experience vaginal pain, one of the most common questions I encounter is: "How can I push a watermelon from my vagina and not have pain afterward?" Unfortunately, doctors are not very good at assessing vaginal pain in the long-term (i.e., beyond the six-week visit).

In our study at UBC, in which we followed women with and without prepregnancy vaginal pain throughout their pregnancy and after delivery, the rule of thirds emerged for the pain group.

In terms of partner-related factors, research shows that the quality of the relationship can also be impacted by parenthood and that this can directly affect sex. In a 2005 Swedish study by Tone Ahlborg of 770 new parents, a third of mothers and just under half of new dads reported being sexually dissatisfied at six-months postpartum. There were fewer positive exchanges and more conflict that chipped away at their relationship satisfaction. Dr. Sari Van Anders explored predictors of desire in a postpartum sample of American couples in 2012, and found that the reduction in sexual desire postpartum was related more to not feeling close to a partner, and not feeling desired by a partner, more than the physical effects of pregnancy and delivery.

As a sex therapist, I usually tell clients who are new parents that as long as you have a child in the house under the age of 5, cut yourself a lot of slack when it comes to not having the sex quality and quantity you once had. There are biological explanations for certain, but the psychological contributors far outweigh them (particularly sleep deprivation, cutting out the arousing behaviour to "just do it and get it over with," putting minimal effort in, etc.)

Most of these changes are completely reversible, so rather than considering permanent sterilization, you might consider the following:

If you're a partner of a new mom, know that psychosocial and relationship factors are key for postpartum sexual desire. These domains can be fostered, and the postpartum period, with all of its newness, may actually be a ripe time for growth in the relationship.

If you're a health-care provider for pregnant and postpartum women, don't just pay attention to vaginal healing and c-section wounds; psychosocial and non-medical factors are key predictors of postpartum sexual satisfaction. Talk to your patients about these areas at their pre- and postpartum visits.

The six-week postpartum visit to resume sex is just a suggestion. There is enormous variability in when couples resume sex after delivery. Listen to your body and communicate openly about this with your partner, including sharing your fears as well as your hopes.

If sex hurts after delivery, ask to be evaluated by a qualified health-care provider. Both the postpartum and breastfeeding result in dramatic reductions in estrogen that can make sex uncomfortable. But postpartum vulvodynia is common, and not only due to low estrogen. Ask for a referral to a physician with expertise in vulvar pain.

As a couple, consider diversifying the sexual buffet if vaginal penetration is temporarily off the menu. We know that women often shift in their preferences for sexual activities (increases or decreases in nipple sensitivity for example) throughout their lifetime. This could be a time of great sexploration!

Long after the physical healing of pregnancy and delivery many couples are disappointed when they find themselves with a desire for sleep and a good book rather than sex. However, it is important to nourish your identity as lovers alongside your new identity as co-parents. Novelty and creativity are key for kindling sexual motivation in any long-term relationship, and particularly among new parents.

Esther Perel's book, Mating in Captivity, has a wonderful chapter titled "Parenthood: When three threatens two" that is a must read for passionless parents. Perel's advice: "It takes time – time measured in years, not weeks – to find our bearings in this brave new world."

Lori Brotto is an associate professor of gynecology at UBC and a registered psychologist. You can find her at brottolab.com and follow her on Twitter @DrLoriBrotto. 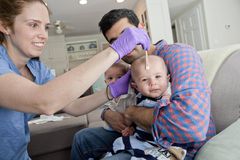