The recent Olympic Games may be over, but many of the athletes who competed at Sochi will have a long road ahead of them recovering from their injuries. Some will never fully recover.

In 2010, the International Olympic Committee began detailed injury tracking during the Vancouver Games and found an overall injury rate of 10 per cent of participants. However, some sports had alarmingly high injury rates, such as the relatively new ski and snowboard cross events, where 35 per cent of participants were injured. But that didn't stop the IOC and Sochi organizers from making even more difficult courses for this year's Games.

Slopestyle was introduced to the 2014 Olympic Games in Sochi. Athletes ski and board down a hill with rails and jumps, performing awe-inspiring tricks. Many athletes questioned the level of difficulty of the Sochi course and its 72-foot (22-metre) final jump. Canadian snowboarder Sebastien Toutant told reporters it "feels like jumping out of a building."

The most serious Olympic injury occurred on Feb. 15, as Russia's pre-eminent freestyle skier, Maria Komissarova, crashed, fracturing her spine. She was airlifted to a nearby hospital where she underwent emergency surgery to stabilize her fractured T12 vertebra. Later, she was transported to Munich for another operation and continuing treatment. On Feb. 26, Komissarova reported through Instagram that she is paralyzed from the waist down.

Paralysis is rare, but serious injury is the norm. Here are a few of the more common ones we saw in Sochi that can affect Olympians and non-Olympians alike.

More than two dozen Sochi athletes and hopefuls were sidelined with anterior cruciate ligament (ACL) injuries at the event or leading up to the Olympics. The ACL is an important ligament that stabilizes the knee. Commonly, it gets torn when there is any combination of twisting, hyperextension, and impact on the outside of the knee.

The ligament does not heal. Instead surgery is required to replace the ligament with a suitable graft. The rehabilitation process to strengthen the knee and return to sport safely takes about six months, often putting athletes out for an entire season. Even then, the risk of reinjury remains high. And patients can expect premature knee joint degeneration in the future.

ACL tears and meniscal tears often go hand in hand. The meniscus is a special cartilage that cushions the knee, protecting the articular surfaces of the knee. When the meniscus tears, and with twisting movements thereafter, people experience a sharp stabbing pain in the knee. In some cases, the knee can "lock," preventing full straightening. If the tear is restricted to the outer third of the meniscus, which has some blood supply, there is potential for the tear to heal. However, surgery is often required to remove the part of the meniscus that is torn. If the patient doesn't experience sharp pains after a period of rehabilitation, he or she might decide not to have surgery to preserve the cushioning effect of the meniscus.

There were 11 different fractures at the Olympics this year. Although there was everything from facial fractures to spinal fractures, these are less common. Fractures of the lower leg and around the knee are relatively common. Most fractures of the lower leg will heal in six to 10 weeks. Some fractures can be casted, others require surgical fixation to allow the bone to heal properly. Aside from the bone injury, there is often soft tissue injury. The soft tissue injury can be more difficult to heal than the fracture itself. Gradual exercise progression is key in returning to sport.

While a concussion may be mild as far as brain injuries go, they don't always feel mild, causing a wide range of symptoms including headaches, memory loss, dizziness, noise and light sensitivity, emotional changes, and more. While concussions are receiving a lot of attention recently in contact sports like hockey, skiers and snowboarders who perform tricks spinning through the air are particularly susceptible to hitting their heads as well. At the Olympics, Czech slopestyle skier Sarka Pancochova hit her head so hard it split her helmet in half. Slopestyle snowboarder Marika Enne hit her head in a practice run and was unable to continue. American snowboarder Jacqueline Hernandez hit her head and lost consciousness; she had to be taken off the hill on a stretcher.

Once an athlete has a concussion, it is important that they get mental rest. That means no sport, no school, no work, no computer or television, no reading, among other things. Return to sport happens only when there are no symptoms remaining. This can take months.

As a physiotherapist who understands the injuries experienced by these elite athletes, I cringe every time I see an athlete fall. I get no pleasure out of the accident highlight reel, knowing the challenges the athletes have ahead. Unfortunately, the IOC and Olympic organizers seem to be using risk to attract viewers. I think it's fair to ask whether we should be exposing our elite athletes to this level of risk for our entertainment.

Justin Vanderleest is a Toronto-based physiotherapist with a Master's of Clinical Science in Advanced Orthopaedics and Manipulation from the University of Western Ontario. He is a Fellow of the Canadian Academy of Manipulative Physical Therapists. An elite squash player and former national champion sprint canoeist, Vanderleest has developed special interests in training programs and injury prevention. Analysis of precipitating factors, and patient-specific corrective exercise are hallmarks of his approach. You can follow him on Twitter @JDvanderLeest

Mind the ice! Eight ways to keep yourself from falling
February 13, 2014 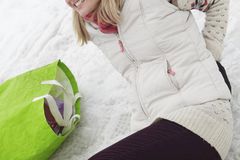 Why women’s germs are important to the health and happiness of us all
February 28, 2014