As a physician and surgeon who has researched and treated men with prostate cancer for more than 20 years, I read with great interest a new study published last week in the New England Journal of Medicine, which set out to answer the question of what happens to men after a PSA test finds prostate cancer.

The British study, which tracked patients for a decade, showed that approximately 99 per cent of the men with cancer survived regardless of their course of treatment, which included one of three options: radiation, radical prostatectomy (removal of the prostate gland) or active monitoring, which involved redoing PSA tests to monitor for changes.

At first blush, this information may indicate that the least-invasive route – active monitoring – is the best choice for men who are newly diagnosed, but I firmly believe that this interpretation is potentially dangerous. First, a diagnosis of prostate cancer should not be taken lightly; this disease is a major killer. Prostate cancer is the third most common cause of cancer deaths in Canadian men. Without treatment, 4 per cent of all males would die of the disease, a death that typically arises from painful bone cancer.

We have known for almost a century that prostate cancer, when detected early, is a long and protracted condition. It is not like brain or lung cancer where, if not treated, patients die within months. Localized prostate cancer usually kills within a 12-to-30-year window. Although it seems strange to think that a cancer can move so slowly, in fact, many cancers of the breast and thyroid gland are the same. As such, we need to think of localized prostate cancer as similar to other chronic conditions, such as diabetes or high blood pressure.

The most important statistic needed for intelligent decision making by men with newly diagnosed prostate cancer is not yet known, since the study has only tracked patients for a decade. It is the 10-to-25-year survival rate that will better allow men and their physicians to make rational choices. Although this may sound irrelevant for a 75-year-old male, it certainly is not for many 45-to-70-year-old men – the men who should be tested and treated – who are desirous of living well into their 80s and 90s.

In my mind, the early hints of information in the New England Journal paper support the currently practised Canadian paradigm, which is called "active surveillance," where patients with very low-risk disease are monitored as well as given periodic biopsies. That is very different from the active monitoring referred to in the British study, which involved monitoring PSA levels only and did not require repeat biopsies.

We ought to pay attention to the twofold to threefold increase in metastatic disease that was reported among the men who were randomly selected to be part of the active monitoring (no treatment) group. These men will virtually all die of prostate cancer and be subjected to worse side effects than the need for adult diapers. Clearly, it will take at least 10 more years of follow up from this study to learn if we are, over all, helping or harming men's health.

I must also add that the quality-of-life loss (urinary leakage/erectile dysfunction) as experienced by British study participants is simply not the modern Canadian one. I have personally performed 3,000 prostate surgeries and have tracked my outcomes systematically (as well as those of my close colleagues) and the risk of wearing adult diapers is about 5 per cent. Erectile trouble is more prevalent (although much lower than in the British experience) but men are informed of this and make logical decisions based upon their philosophy about health and quality of life. In a similar vein, high-blood-pressure drugs save some patients' lives, but their benefits are not apparent sometimes for many years. They also cause erectile dysfunction. Should we stop using them?

The authors of the British study deserve credit in conducting such a challenging study. Canadian investigators (including yours truly) failed in convincing men to take part in a similarly designed trial. So what are we to do over the next 10 years while the data trickle in? For one, I would advise against "active monitoring" as defined in the New England Journal paper. Instead, patients should talk with experts in the field who are well versed in the prostate cancer literature. Having a man choose to simply monitor certain prostate cancers can render a curable cancer incurable. Period.

In summary, the early signals in this paper point toward the need for treating men with aggressive tumours and monitoring those with very low-risk disease. This practice has been the norm in Canada for more than 10 years.

Dr. Fleshner is a uro-oncologic surgeon and professor and chairman of urology at the University of Toronto. He holds the Love Chair in prostate cancer prevention at the Princess Margaret Cancer Centre.

What’s the best method of screening for prostate cancer?
September 15, 2016 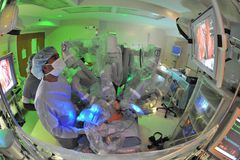