"Cindy, you used to be so well organized, everything OK?

"Paul, why are you late again for this meeting? If it happens again you'll be fired."

"Mom, I already told you that, aren't you listening?"

These comments may not seem odd if directed towards people in their 70s or 80s. But what if they are in their 40s, 50s, or early 60s? Would that seem strange?

Five per cent of all people with Alzheimer's disease develop symptoms before age 65. We call this early-onset Alzheimer's disease (also known as young-onset AD). It usually develops when someone is in their 50s or early 60s but in very rare cases in their 30s and 40s. These rare, very early onset cases are usually associated with a gene mutation. Often times there will be a very strong family history, meaning many people across many generations have the disease.

Some believe that early onset Alzheimer's disease progresses faster. A recent review of the literature seems to support this, but the results are conflicting and more research is needed.

A proper diagnosis is fundamental in helping the person plan for their future and it is essential so family and friends can respond with understanding and compassion. Until the diagnosis is made, there can be resentment towards and conflicts with the patient because of their change in personality.

Early-onset AD is diagnosed the same way as late-onset, based on clinical history and imaging primarily, but in some cases we analyze the cerebrospinal fluid for the biological markers of Alzheimer's disease. Unfortunately the pathway to a diagnosis of Alzheimer's disease or other dementia for a young person is often long, torturous and can be riddled with misdiagnosis.

It starts with someone – and it may be the patient – recognizing that something is wrong. The person may notice they are slipping at work, less organized than they used to be, repeating themselves or forgetting appointments. Cognitive impairment is more obvious when highly demanding tasks are involved and someone usually notes a change in performance.

A diagnosis of Alzheimer's disease or other dementia can be devastating to a person and their family at any age, but there are some additional matters that need confronting when it happens to a young person. These are employment, intimacy and young children.

One must remember that many of these people may still be working. In some cases, people lose their jobs before a diagnosis is made. In others, even if there is a diagnosis, employment is terminated, which leads to financial hardship.

The loss of intimacy can be especially poignant. Often in the beginning, the partner is unaware and may misinterpret the changes in personality as disinterest in the couple or a midlife crisis. There can be a drastic change in the roles of the two people in the couple at a time when it is unexpected. It is not uncommon for the couple to separate or divorce before a diagnosis is even made.

Young children can pose multiple complications. It can be difficult for them to understand the change in personality of their parent. The caregiver may be sandwiched between their children and partner, both requiring care. In some cases, there are also elderly parents requiring attention.

As in late-onset Alzheimer's disease, we have no cure for patients with early-onset AD. We use the same medications to treat symptoms for both types - acetylcholinesterase inhibitors to help memory and anti-depressants to help mood. We encourage healthy lifestyles, which include exercise and cognitive activity to help brain reserve.

Getting educated about this illness in imperative. Reaching out to the local Alzheimer's society is the first step. These organizations provide vital information, services and support groups.

While some cognitive functions are impaired there are many activities that the person can still do and should do. Take a course, learn to paint, join a group. It is important to use the brain. Use it or lose it is especially relevant when it comes to the brain and preserving function.

Although I have focused on early-onset Alzheimer's disease, there are other causes of dementia that typically affect the young, the most common being frontotemporal dementia. This is another cause of dementia where changes in personality and behaviour are key features of the disease.

We still have much to learn about early-onset Alzheimer's disease but we know it is out there and that the needs of this population are different. We need targeted research and services to better serve them and their families.

Health Advisor contributors share their knowledge in fields ranging from fitness to psychology, pediatrics to aging. Dr. Carmela Tartaglia is a neurologist at the Krembil Neuroscience Centre's Memory Clinic at Toronto Western Hospital, researcher at the Tanz Centre for Research in Neurodegenerative Disease and assistant professor at the University of Toronto.

Alzheimer's diagnosis takes centre stage for Spirit of the West frontman
September 8, 2014
There’s more to dementia than memory loss. Know the signs
May 28, 2014 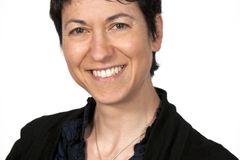 Decoding dementia: Knowing the cause can help you plan for the future
April 3, 2014