Children who are born by cesarean section have been shown to be at greater risk of developing a host of illnesses, including asthma and type 1 diabetes, as they grow older. Researchers at the University of Alberta have been investigating whether gut bacteria play a role.

The researchers say they have found distinct differences in the type of bacteria in the intestinal tracts of babies who were delivered by c-section, compared with those who had a vaginal birth. And they believe that these microbial differences could have lifelong health consequences for the children.

The adult human gut is teeming with billions of "friendly" bacteria that aid digestion and help to guard against pathogens, but a newborn's belly is virtually devoid of microbes. Normally, a child's first exposure to bacteria occurs during the passage down the mother's vaginal canal. The infant becomes covered in bacteria – and some is ingested. The infant picks up more bacteria from mom through breastfeeding. In this fashion, the child's gut begins to be populated with beneficial bacteria that also play a critical role in developing the infant's immune system.

However, a child who is delivered by c-section essentially bypasses this initial bacterial dunking. What's more, women who have c-sections tend to delay breastfeeding and they are given antibiotics to ward off infections in their incision.

Health experts have long suspected that c-section babies might be colonized by different types of bacteria than other infants. But some gut bacteria are notoriously difficult to grow in a laboratory petri dish. Only with recent advances in DNA sequencing, permitting rapid genetic identification of individual bacterium, has it become possible for scientists to undertake a detailed investigation of our microbial inhabitants.

For the study, the researchers examined stool samples from 24 healthy infants who are part of the larger Canadian Healthy Infant Longitudinal Development (CHILD) study. The samples were collected when the babies were four months of age.

The analysis, published on Monday in the Canadian Medical Association Journal, reveals that infants born by cesarean delivery were lacking a specific type of bacteria called Bacteroides. Furthermore, they had relatively few bacteria from the category called Escherichia-Shigella, compared with the infants born vaginally.

"Escherichia-Shigella are normally among the first bacteria to inhabit the gut, creating a hospitable environment for others such as Bacteroides – and Bacteroides then help to train the infant's immune system," said the senior researcher, Anita Kozyrskyj, an associate professor in the department of pediatrics at the University of Alberta.

The immune cells in the gastrointestinal tract become accustomed to these beneficial microbes and learn to not to attack them. It's all part of a complex process in which the immune system learns friend from foe.

Any disruption in this learning process could set the stage for a wide variety of illnesses in which the immune system overreacts to relatively harmless substances in the environment. In the case of asthma, for instance, the lungs become inflamed when exposed to certain airborne particles.

Kozyrskyj noted that previous studies have shown that infants born by cesarean delivery are at increased risk of asthma, food allergies, celiac disease and type 1 diabetes (in which the immune system destroys the body's insulin-producing cells). These children are also face an elevated risk of obesity – which might be related to the mix of gut bacteria that aid food digestion and the absorption of nutrients from the intestines.

The new study also uncovered microbial differences that appear to be linked to feeding practices. The guts of formula-fed infants were likely to contain strains of Clostridium difficile, pathogenic bacteria that can cause severe diarrhea.

Although more studies will be needed to confirm these findings, the researchers hope that their work will make people reconsider the need for "elective" – or non-emergency – c-sections in which the health of the child or mother is not in jeopardy.

"We want parents – and physicians – to realize that their decisions regarding c-section and breastfeeding can impact their infant's gut microbiome and this can have potentially lifelong effects on the child's health," said Meghan Azad, a postdoctoral student and first author of the study.

Even so, Canadians seem to be opting for c-sections in increasing numbers. In 1990, about 18 per cent of newborns were delivered surgically. The latest statistics show that c-sections now account for 27 per cent of all births in Canada.

Meanwhile, some illnesses appear to be on the rise – paralleling the growing popularity of c-sections. The prevalence of asthma, for instance, has increased over the past two decades and about three million Canadians now have the condition.

"C-section and asthma could be connected," said Rob Knight, a co-author of a commentary published with the study and an associate professor at the University of Colorado. "There have been several studies showing that more diverse microbial communities lead to lower rates of asthma, allergies and autoimmune diseases, and this study shows that c-section leads to lower microbial diversity."

It has become accepted medical practice to deliver twins by cesarean section: Doctors have assumed this approach is less risky for the babies, especially the second infant. But a new study indicates a cesarean is no safer than a vaginal birth for twins.

"Our findings show that planned vaginal birth is the correct method for delivering twins in a pregnancy that is otherwise uncomplicated and when the first baby is facing head down," said lead researcher Jon Barrett of the Sunnybrook Health Sciences Centre in Toronto.

The study involved 2,804 women in 25 countries who were randomly assigned to deliver either by c-section or vaginally. Barrett, who presented the study in San Francisco to the Society for Maternal-Fetal Medince, noted c-sections can lead to complications and a prolonged recovery for the mother. 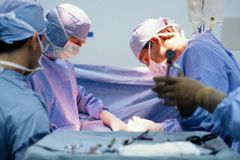