For the first time, the American Cancer Society is telling women that routine mammograms are more likely to harm than help before the age of 45.

The new guideline, released publicly on Tuesday, brings the society closer in line with recommendations from the Canadian Task Force on Preventive Health Care, an independent panel of experts specializing in prevention, primary care and evidence-based policy, and the International Agency for Research on Cancer, which advocate for routine screening of average-risk women to start at the age of 50. Previously, the cancer society urged women to get regular mammograms starting at 40.

But over all, a lack of consensus remains over how early is too early to screen for breast cancer and this heated debate adds to the confusion felt by many women.

Given the different advice, what should women know?

A mammogram is an X-ray of the breast that can detect the possible presence of cancer. If doctors spot a possible tumour, the patient will then undergo follow-up tests in order to diagnose and, if needed, treat the disease.

But in some cases, mammograms deliver false positive results: The X-ray appears to be abnormal, which triggers biopsies, further screening tests, as well as anxiety and distress in patients, despite the fact there is no disease present. In other cases, a cancer that would never grow to become a health threat is diagnosed and treated. These risks are particularly common in younger patients – those under the age of 50 – according to mounting scientific evidence.

To help give some clarity, major health organizations have published screening guidelines for women over the past few years.

In 2009, the U.S. Preventive Services Task Force announced that routine mammograms for breast cancer should not begin until the age of 50 for women at a normal risk for the disease. The task force reaffirmed this position earlier this year. In 2011, the Canadian Task Force on Preventive Health Care came to similar conclusions: Women should have mammograms from the ages 50 to 74 every two to three years. (The recommendations are different for women at high risk for breast cancer, such as those with a family history of the disease or with mutations of the BRCA1 and BRCA2 genes.)

The guidelines were aimed at doctors across Canada and the United States and were meant to influence policy nationally. Across Canada, provinces offer screening to women starting at the age of 50, but women can choose to request mammograms earlier.

However, some groups, such as the Canadian Association of Radiologists, stand by the idea routine mammograms should begin at the age of 40. In a statement issued earlier this year, CAR president Jacques Lévesque said the organization supports "organized, high quality screening" and noted that other medical groups, such as the American College of Radiology and the American Cancer Society share its views.

Now, the American Cancer Society is shifting its policy. While it is still advocating for routine mammograms for women aged 45 to 49, the new guidance is much closer to the advice from the U.S. and Canadian task forces, as well as the Canadian Cancer Society.

So which guidelines are correct?

In health, there are very few black and white issues, which is why the debate over breast screening continues. Advocates for earlier screening argue that it can help save lives, while critics point out the risks of unnecessary treatment, over-diagnosis and other serious problems are too great.

Numerous studies have also tried to answer this question, but they differ in quality and methodology. However, earlier this year the International Agency for Research on Cancer published a major study of high-quality peer-reviewed evidence on various breast screening methods. The experts found that mammograms reduce the risk of breast cancer death for women aged 50 to 74. The evidence for women aged 40 to 49 was limited, the authors said.

In its review of the evidence, the new guidelines from the American Cancer Society also argue that the harms of mammograms before the age of 45 outweigh the potential benefits. Those potential harms include misdiagnosis or unnecessary follow-ups.

Some research even suggests the benefits of mammograms overall are overstated. A 2013 Cochrane review found that for every 2,000 women who are screened over a 10 year period, only one life will be saved, while 10 healthy women will undergo unnecessary treatment. Another 200 women will suffer anxiety and distress because of false-positive results, the review found.

Are vested interests involved in the screening debate?

Many radiologists and radiology groups, including the Canadian Association of Radiologists, have come under fire for their advocacy of early mammograms because of what some critics say is an inherent bias because they perform screening tests. Some radiologists also receive research funding from companies that make mammography and other screening equipment.

On its website, the Canadian Association of Radiologists lists its industry partners that "are essential" in helping the organization "in achieving its goal of advancing the profession through leadership in health care and excellence in patient care." The partners are General Electric, Siemens, Christie InnoMed and Bracco Imaging.

The association's 2014 annual report names a number of imaging companies as sponsors of its annual meeting. Gold sponsors include EOS Imaging, Christie InnoMed and Philips Healthcare.

The Canadian Association of Radiologists declined an interview request from The Globe and Mail.

While mammograms have a role to play, it's also important to remember that major advances in treatment of breast cancer are largely responsible for the reduction of deaths from the disease.

Robert Nuttall, assistant director of cancer control policy at the Canadian Cancer Society, said the idea that more screening is better continues to prevail because there is not enough public awareness of the harms.

"The easy message is screening saves lives," he said. "But people have to realize it's not for everyone, that there are harms associated with it, that there are downsides." 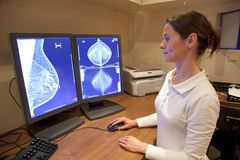