Correction: Rita MacNeil was admitted to hospital for abdominal surgery. Among other things, she suffered an infection before her death. She did not acquire the infection in the hospital, according to senior medical officials of the Cape Breton District Health Authority. An earlier version of this column incorrectly said she contracted an infection in hospital after surgery.

Hospital-acquired infections are a scourge, one that garners far too little attention.

The bugs patients catch while in care sicken 250,000 patients annually and kill between 8,000 and 12,000 Canadians. They are one of the leading causes of death in this country; to get a sense of their scope, consider that they kill twice as many people as breast cancer.

Many, but not all, of the deaths are preventable. By some measures, basic hygiene measures could prevent half of the fatalities.

People who are in hospital are often gravely ill; they are susceptible to infections, and bugs that healthy people would shake off easily can be deadly for those with other health problems. Sometimes, an infection can even bring about a merciful death: For a long time, physicians called pneumonia the "old man's friend" because it is a relatively painless death.

But people dying of hospital-acquired infections are not all frail seniors and not all are dying painlessly. They are suffering – and suffering horribly – from increasingly difficult-to-treat bugs like Clostridium difficile (where you essentially defecate to death) and methicillin-resistant Staphylococcus aureus (MRSA), which causes painful boils and can lead to the shutdown of your organs.

If that was not bad enough, these pathogens are increasingly resistant to treatment. For emerging bugs like CRE, carbapenem-resistant Enterobacteriaceae, there are almost no viable drugs, and they kill more than half of people who contract them.

All surgery carries risks. People are going under the knife because they have health problems, often very serious ones. That's why it is often said there is no such thing as 'minor' or 'routine' surgery. But it is not anesthesia and bleeding that cause the most surgical complications.

The greatest danger actually comes after the patient leaves the sterile surgical suite and is moved back to the real world, to the hospital ward. There, the danger is infection. A surgical wound can be a point of entry for a lot of nasty bugs. This is particularly true for patients with chronic conditions like diabetes, cellulitis and immune-compromising illnesses. Their wounds must be cared for meticulously. Often these high-risk patients are already being treated with antibiotics for various bacterial infections and, paradoxically, this makes them more susceptible to other bugs.

The pathogens that do the most damage in hospitals are not usually airborne infections, though the flu can be deadly. There are two principal routes of spread of hospital-acquired infections: shared toilets combined with inadequate housekeeping and health professionals who don't adequately wash their hands.

When the Canadian Institute for Health Information published the first hospital standardized mortality rates (a comparison of expected deaths and actual deaths), the results were troubling– there were hospitals with mortality rates as much as 37 per cent above average. That's far too great a variation. (And let's not forget that the average rate in Canada is pretty poor to begin with.)

Thankfully, this issue is getting some serious attention from organizations like the Canadian Patient Safety Institute and the Canadian Nosocomial Infections Surveillance Program, which have done important work on hand hygiene and developing metrics for measuring patient safety so institutions can improve.

What we know though is that seemingly little things like adequate housekeeping staff, good hand-washing rates among health professionals, and infrastructure issues like good ventilation and enough sinks matter most.

In its recent exposé Rate Your Hospital, the CBC program the fifth estate focused a lot on patient safety issues such as mortality rates after surgery. They are, on average,  8.6 deaths per 1,000 surgeries nation-wide and but the rate is more than double that in some institutions.

Medicine and surgery are not risk-free; that number will never be zero. But our current rates are far from optimal; when it comes to patient safety, Canada doesn't compare well internationally.

So why do we tolerate this? Why does the fact that there are 8,000 to 12,000 deaths annually due to hospital-acquired infections not fill us with rage? In Canada, we are too closed-mouthed about problems in our health system and too reluctant to hold institutions and individuals responsible for their failings.

The realization hospital-acquired infections are so commonplace – some 700 infections 30 deaths daily - should give us all a sickening feeling in the pit of our stomachs. It is our grandmothers, fathers, children and friends who are going under the knife, and too many of them are dying, and dying needlessly.

For their sake, if not our own, we should demand to know why our hospitals are not cleaner and safer.

Hospital-acquired infections: Share your stories
April 26, 2013
Opinion
Should Canada punish hospitals for poor care? Other countries do it
April 26, 2013 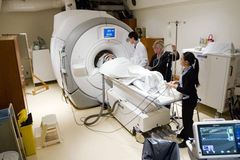