In her short life, Brygette Park has gone from medical oddity to medical trailblazer.

The four-year-old girl from Corner Brook spent the first half of her life in constant pain, with a series of illnesses, from vomiting up to 30 times a day through to life-threatening meningitis, not to mention severe arthritis and an endless array of problems related to her intestinal tract. (The gut is a key element of the immune system.)

Despite endless tests – and the toddler virtually living in Toronto's Hospital for Sick Children – doctors were unable to pinpoint the exact cause of her woes. They recognized that she had some form of inflammatory bowel disease (IBD), but it did not respond to traditional treatments, and the problems were growing ever worse.

"Her quality of life was very bad and we had run out of treatments," Dr. Aleixo Muise, a gastroenterologist at the hospital, said in an interview.

Doctors had some inkling that the source of the problem was genetic, but they did not know exactly what to do, he said.

Then, just before Brygette's second birthday, researchers identified a new genetic mutation that seemed to cause severe IBD. The girl was tested and found to have a rare mutation that meant her interleukin 10 receptor – essentially the body's off switch for inflammation – was broken. (Because it is a recessive gene, both her parents had to be carriers, which they were, but there was no prior history of the condition in the family.)

The way to fix this was to replace Brygette's immune system, which can be done only with a bone-marrow transplant. The catch was that, for a child in poor health like her, the mortality rate is about 50 per cent.

"It was a pretty easy decision actually," Penny Lambert, Brygette's mother, said in an interview. "A bone-marrow transplant was her only hope so we had to take that chance."

Lambert had already given up her job as an insurance agent and lost her home because of the demands of caring for her daughter.

Once a suitable donor was found – it turned out to be a 43-year-old father of four from Winnipeg – the transplant was performed on July 15, 2010.

While Brygette flirted with death in the weeks after the operation – her liver shut down, she had severe blood poisoning and suffered other infections – the transplant worked and most of her lifelong health problems disappeared.

Brygette does have some lingering health problems, though. She is suffering from vitiligo (a loss of pigment in the skin, which is not unusual in bone-marrow transplant recipients) and she has cataracts because of years of taking steroids to treat her IBD.

Brygette is the only child in Canada to have undergone this procedure and only one of 20 in the world.

Despite the girl being cured, Muise stressed that a bone-marrow transplant should not be considered a treatment for others suffering from inflammatory bowel disease, unless they have a rare genetic mutation. "It's really a risk to do it so it has to be a treatment of last resort," he said.

Muise also noted that IBD is normally caused by a combination of genetic and environmental factors and it can usually be treated with medication, changes of diet and surgery, whereas Brygette suffered from a disease caused by a single gene.

"This is probably the most rewarding thing you can have in medicine, to actually cure a child with a severe condition," he said.

But beyond Brygette being cured, he said, her case sparked the creation of an international research consortium known as Neopics that is collecting genetic data from childhood sufferers of IBD around the world to identify new genetic pathways and, hopefully, find new treatments.

"We hope a lot of good is going to come of this research," Muise said.

Editor's note: An earlier version of this story incorrectly stated that Brygette's kidneys had shut down when in fact her liver had shut down. This version has been corrected. 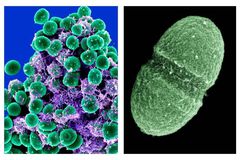 Cold reality: Disease of the bowel besets 1 in 300 Canadians
September 1, 2006
Follow André Picard on Twitter @picardonhealth
Report an error Editorial code of conduct
Due to technical reasons, we have temporarily removed commenting from our articles. We hope to have this fixed soon. Thank you for your patience. If you are looking to give feedback on our new site, please send it along to feedback@globeandmail.com. If you want to write a letter to the editor, please forward to letters@globeandmail.com.
Comments