I exercise first thing in the morning, usually a 45- to 60-minute run or stationary cycle. Is it best to eat before, or after, I work out? I am trying to lose weight.

It's a much debated question: Should you work out on an empty or (partially) full stomach? The answer, I'm afraid, isn't clear cut. It depends on your overarching fitness goal: weight loss, improving endurance performance or both. Even then, your overall diet factors in, too.

If your main objective is to lose body fat, research suggests that getting your run – or bike ride – in before you eat breakfast delivers extra benefits.

Arguments for exercising on an empty stomach

A 2013 study published in the British Journal of Nutrition found that healthy men who ran on the treadmill for 60 minutes at a moderate intensity before eating breakfast burned 20-per-cent more body fat afterward than when they ran the same distance two hours after eating a morning meal.

What's more, when men ran on an empty stomach, they didn't feel hungrier or consume extra calories at lunch than when they ate breakfast before their run.

Research conducted at the University of Glasgow in 2012 found that among non-exercising, overweight men, those who walked briskly for an hour before breakfast burned more body fat over the next eight-hour period than they did when they ate before exercising.

A 2010 study, published in The Journal of Physiology, compared the fat-burning and metabolic effects of pre- or postbreakfast exercise, or no exercise at all, in healthy, active young men fed a high-calorie, high-fat diet.

Men who didn't exercise after eating a hefty breakfast gained weight and developed insulin resistance, a precursor to Type 2 diabetes. In insulin resistance, the body does not respond properly to insulin and, as a result, doesn't easily pull glucose from the bloodstream into cells.

Men who ate the same breakfast before an intense exercise regimen – 60 or 90 minutes of running and cycling, four days a week – and consumed a sports drink during exercise gained about half as much weight as non-exercisers. They also, however, developed insulin resistance.

The group that exercised before eating breakfast – and drank only water during their workouts – did not gain weight nor did they show signs of insulin resistance. They also burned fat more efficiently.

It's thought that working out before eating breakfast increases the proportion of body fat burned during exercise. Research also suggests that exercising in a fasted state increases levels of proteins that help insulin move glucose into muscle cells.

Taken together, these studies suggest that if you head to the gym in the morning in the hopes of shedding weight, doing so before you eat breakfast will give you a competitive edge.

There are limitations, as always. These studies were very small involving at most 28 participants, all of them men. It's possible that, due to hormonal differences, the results may not apply to women.

The research looked at the effect of aerobic exercise on fat burning; it doesn't apply to strength training for building muscle strength. Studies suggests that consuming a protein-rich snack before resistance training is beneficial for post-exercise muscle repair.

Let's not forget, too, that losing weight (body fat) depends largely on your daily calorie intake. Overeating later in the day will presumably wipe out the fat-burning benefits that come from exercising before eating breakfast.

Reasons to eat before morning exercise

Exercising on an empty stomach doesn't work for everyone. Forgoing breakfast, even a small preworkout snack, won't improve your performance. Something to consider if you're training for a triathlon or half or full marathon.

During moderate to intense exercise, most of your muscle fuel comes from carbohydrates in your bloodstream (glucose) and those stored in your muscles (glycogen). Without incoming carbohydrates from breakfast, you'll tap into muscle glycogen sooner causing early fatigue.

Working out on an empty stomach may even hinder athletic ability. A grumbling, acidic stomach can distract from the physical task at hand. And for some, exercising without fuel in the belly can be psychologically discomforting (i.e., do I have enough energy to finish my run?).

Bottom line: Whether you're better off eating breakfast before or after your early morning workout comes down to what works for you.

If you prefer to eat breakfast or a small snack before you run or cycle, choose wisely. Eating too much food can cause digestive upset during exercise. Most people feel their best by splitting their breakfast into a pre- and postworkout snack.

Avoid eating foods that are high in protein, fat and fibre since these take longer to empty from the stomach.

Eat a carbohydrate-rich snack, 30 to 60 minutes before exercise, such as a small portion of oatmeal, a banana and/or yogurt, a fruit smoothie, berries with cottage cheese, or a slice of whole-grain toast with nut butter. Drink one cup of water, too.

Whether you choose to run on an empty stomach or not, refuel afterward to optimize recovery. Include a mix of carbohydrates to replenish muscle glycogen, protein to aid muscle repair, healthy fats to prolong satiety and fluids to rehydrate.

What’s the best way to monitor your pound-shedding progress?
September 23, 2016 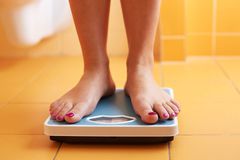