One of the biggest challenges standing in the way of reduced waiting times and more efficient, co-ordinated care in Canada's health-care system is a lack of transparency when it comes to waits for many procedures and surgeries, according to a national report card.

No province has established benchmarks for waiting times for pain management or psychiatry, says the report released Tuesday, and many provinces have no waiting-time data for a variety of treatments and procedures, including cardiac rehabilitation, scheduled whole-body bone scans and skin cancer treatment.

"How long you wait for treatment has a lot to do with your postal code," said Chris Simpson, chair of the Wait Time Alliance and president-elect of the Canadian Medical Association. "Don't Canadians deserve the same quality of care no matter where they live?"

The Wait Time Alliance was formed in 2004, the year the federal and provincial governments made a commitment to reducing waiting times, focusing first on five key areas: cancer, coronary artery bypass graft, magnetic resonance imaging (MRI) and computed tomography (CT) scans, hip and knee replacements and cataract surgery. The alliance has since expanded its purview to look at waiting times in a number of other areas of cancer, cardiac, diagnostic imaging, chronic pain and general surgery, among others, but the information is often incomplete or unavailable.

The lack of data is a key problem because without it, it's difficult to know where improvements need to be made. It also prevents the public from demanding better access in those areas where the system is faltering.

Even when the data is available, it often doesn't tell the full story. For instance, waiting times for knee replacements may not take into account the time it takes to be referred from a primary physician to a specialist. Similarly, the data could be skewed by patients who choose to wait so they can see their doctor of choice, according to Cy Frank, CEO of Alberta Innovates Health Solutions.

Stephen May, a spokesman with the B.C. Ministry of Health, said the province is working to track information on the time it takes for a referral to a specialist, but that it has to first make sure the information is accurate.

The report card singles out Scotland as an example Canada should emulate. There, updated data on waiting times and performance indicators are available to the public; more than 90 per cent of patients who need elective care are seen and treated within 18 weeks, which includes the referral time to see a specialist.

The good news: The report card found that, among the five priority areas, several important improvements have been made, particularly in Saskatchewan, Ontario and Newfoundland and Labrador.

But there is much room to improve further. Canadians still wait far longer in the emergency room than many other countries with publicly funded health-care systems – 27 per cent of Canadians report waiting more than four hours, compared with 1 per cent in the Netherlands and 5 per cent in the United Kingdom. But the long waits are not the result of too many people showing up with sprained ankles, stuffy noses and other inappropriate cases. The real problem is hospitals are inundated with chronically ill, elderly patients who "block" beds because there is nowhere else for them to go, causing a backlog of patients in emergency waiting to be admitted.

The report also notes that benchmarks for cardiac care are woefully inadequate. Coronary artery bypass graft was identified as one of the top five priority areas for waiting-time reductions in 2004, but it represents only 1 per cent of the cardiac care received in Canada, according to the report. 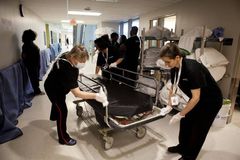 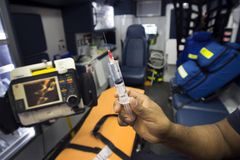 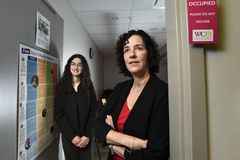 Birth centres: A middle ground between hospital and home
May 10, 2014 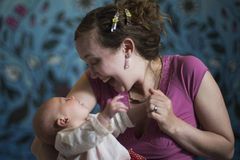 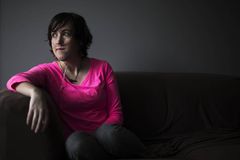