Adam Maier-Clayton, who took his own life last week, had begged many people to help him end his suffering. One of them was Dr. Ellen Wiebe. She is the country's pre-eminent practitioner of Medical Assistance in Dying (MAID), the Liberal government's law in response to the Supreme Court's 2015 Carter ruling that decriminalized physician-assisted suicide. Wiebe and Maier-Clayton met several times by Skype and e-mail over the last many months, she said in an interview on Monday. "It was a distressing situation," she recalled. "He suffered so much, and he wasn't able to have a good death."

At 27, Maier-Clayton, a bright, articulate activist, had a multitude of intractable mental illnesses, which were not responding to drugs, therapies, or experimental treatments. He was not suicidal, as he kept insisting on social media and to broadcast and print journalists. He just wanted the pain to stop, pain that was enduring, irremediable and intolerable – all the qualifying criteria the Supreme Court had laid out for competent patients in Carter.

Wiebe was moved by Maier-Clayton's plight and distressed that the choices he outlined for himself were all "hideous." So why didn't she help him die, as she had done with other patients?

André Picard: The mentally ill must be part of the assisted-dying debate

The problem, essentially, was that Maier-Clayton was suffering from a mental illness, albeit one with debilitating physical symptoms. Just one mentally ill patient, a woman known only as E.F., has been granted a physician-assisted death in Canada. At 58, EF was suffering from such a severe conversion disorder (a mental illness with physical manifestations) that she couldn't walk, had trouble digesting food, and had such intense migraines and involuntary muscle spasms that her eyelids had fused shut. She applied for a physician-assisted death under a constitutional amendment before the government passed its MAID law last June.

Alas for Maier-Clayton, he had to apply under the more restrictive MAID rules. MAID goes beyond the Carter criteria of "grievous and irremediable" suffering which is intolerable to the patient. It requires a patient to be in an irreversible decline and to have a reasonably foreseeable natural death. That was a crucial difference in the medical assistance EF and Maier-Clayton received. Maier-Clayton, who was diagnosed with obsessive compulsive disorder, generalized anxiety and a conversion disorder, similar to E.F.'s, "did not qualify under our law," Wiebe said. That meant she "couldn't even assess him," for MAID, using the clinical guidelines to determine "mental suffering" that she had developed over 40 years as a practicing physician.

Wiebe says helping a patient die should never be an easy call, a decision that is "absolutely" more onerous when the suffering is caused by a mental illness rather than, say, terminal cancer. But difficult should not mean impossible. E.F.'s suffering was more enduring and overtly demonstrable than Maier-Clayton's, who was 30 years younger, but that doesn't mean his pain wasn't real. "I believe that Adam's suffering was terrible and it was probably irremediable," she said. She remains "very conflicted" about Maier-Clayton's relatively young age, but to turn away from a patient in distress, as the law demands with mental illness, distressed her mightily. (The government has initiated a review of the ban on mental illness, which is due in 2018, but so far it is not required to hold consultations with patients or their families or required to produce any recommendations.)

"I am my own saviour," Maier-Clayton wrote in his final Facebook post, before reportedly consuming an overdose of Nembutal, a drug he almost certainly acquired illicitly on the Internet. That's what happens when we rob suffering patients of hope. They kill themselves alone and in secret, often by violent means. Some of them botch it and end up in worse condition than before they tried to end their lives.

Maier-Clayton's deplorable situation reminded me of Amy de Schutter, a Belgian woman who appeared in the 2016 CBC documentary Road to Mercy. De Schutter, 29, has refractory depression, and a history of self-harm and multiple suicide attempts. In the film, we watch her apply for medical assistance in dying, under Belgium's 2002 euthanasia law, including interviews with her psychiatrist Dr. Lieve Thienpont. Finally, despite Thienpont's reluctance, de Schutter secures the right to end her life with a doctor's help.

Here's the thing. Now that she had death as an option if her despair worsened, de Schutter felt calmer, as she explained to the audience at a Canadian screening of the documentary last fall. She believes that there will eventually come a time when she will have an assisted death, but for now she is hopeful enough to carry on. Road to Mercy producer Nadine Pequeneza told me that de Schutter has written a book about her experience and is working with caregivers to increase their understanding of mental illness in people like herself.

Wiebe has seen the same phenomenon with her own patients. "They are so grateful to be given the permission [to die], and then they don't need it, or they need it much later," she said. "It just gives them the ability to put up with so much more." A similar option might have offered Maier-Clayton the sustaining beacon he needed. "He was so articulate and so clear," says Wiebe. "His thinking was not destroyed by his mental illness. When I talked with him he was still trying more therapies. If he could have gotten even a little bit better, he would still be alive."

Maier-Clayton's suicide behooves the rest of us – at least those of us who believe in patient autonomy and think that medicine should be practiced in the best interest of patients – to respect the suffering of the mentally ill. We can't leave it to vote-wary politicians and risk-averse medical associations to campaign for an equitable MAID law. After all, it took more than 20 years after Sue Rodriguez lost her Supreme Court challenge to decriminalize assisted suicide. We can't wait for another constitutional challenge to recognize that not all suffering is physical. That struggle is Maier-Clayton's legacy – and fighting for it might make a difference to you or somebody you love.

Sandra Martin's book A Good Death, which is shortlisted for the Donner Prize, has just been released in paperback.

Why we need better end-of-life policies in seniors’ residences
April 12, 2016 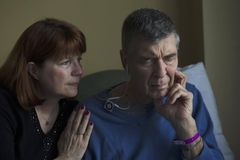 Life-and-death drama plays out in the Supreme Court
January 21, 2016