SECRETS OF THE CELL
This year’s winners of the Canada Gairdner International Awards are known for scientific discoveries that reach deep into the inner workings of cells. As Ivan Semeniuk reports, they also offer insights that may help thwart diabetes, autoimmune disease and a range of cancers 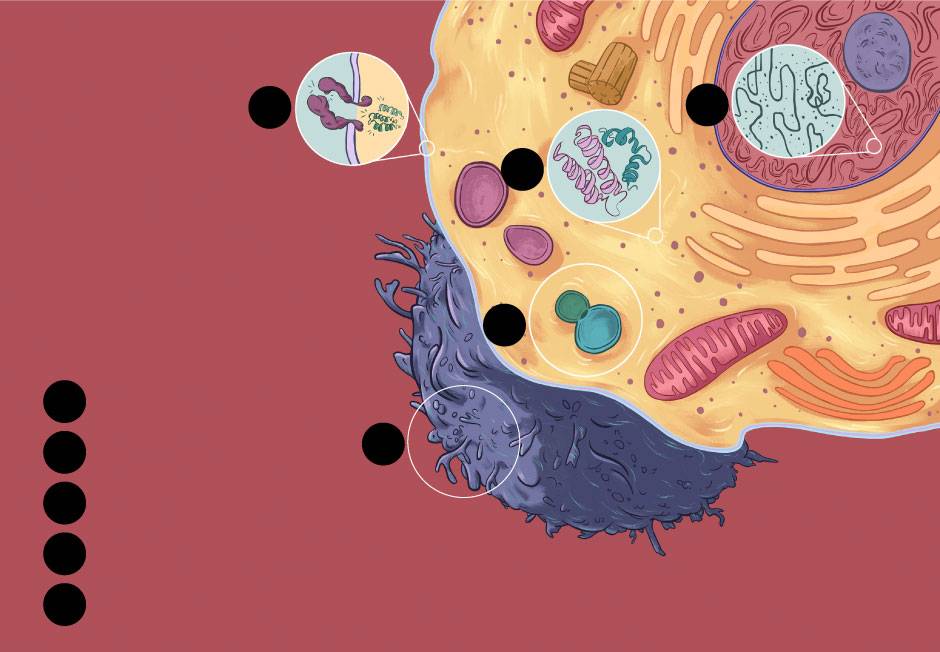 THE MACHINERY OF LIFE:

Five discoveries
that reveal the
machinery of life:

*Click the white text or numbers (supply chain, growth etc.) to jump to the relevant section.

In 1665, the English polymath Robert Hooke wrote that he had gazed at a thin slice of cork through his microscope and found it to be full of tiny spaces. He coined the term “cells” to describe what seemed to him like empty little rooms.

Hooke didn’t know it, but he had stumbled upon the basic unit of life and the key to modern medicine. Living things, as scientists would come to realize, are made of cells. But empty little rooms they are not.

As is made clear by this year’s Gairdner Awards – Canada’s top international medical-science prizes – the cell is more like a city. It is a vast collection of integrated systems that work together to marshal resources, power assembly lines, build impressive structures, dispose of waste, preserve information and perpetuate growth. But unlike any human city, a cell is a self-managed metropolis – there are no bureaucrats keeping the wheels turning, the wheels turn by themselves, guided by genetics and honed by billions of years of evolution. Our lives depend on it.

The Gairdner Awards have a track record of throwing the spotlight on research that has proven significant in the long run. Many winners eventually become Nobel laureates. This year’s recipients illustrate a long but fruitful road between curiosity and application. While their groundbreaking experiments were, in most cases, performed decades ago, their impact on human health is just beginning to be felt. What they have in common is their role in unlocking the black box of how cells regulate themselves. Along the way they have helped transform our understanding of the way life works.

Just as a city must import food and energy, a cell needs to bring in resources to sustain itself and grow. But when should the drawbridges be lowered?

For cells, the answer depends on a chain of interactions between different kinds of molecules – each one triggering the next. Together these interactions convey a message about the environment outside so that cells can respond and bring supplies on board when they are there to be had.

In the mid-1980s, Lewis Cantley was trying to figure out how insulin activates cells to take up glucose, a key nutrient. Together with colleagues he discovered an enzyme that picks up the message that insulin has been detected by receptors that poke through the cell membrane. The enzyme fires up the internal signalling system and ultimately causes the cell to pump the glucose in.

Although it has the unfamiliar name of phosphoinositide 3-kinase, Cantley’s discovery is crucial to body function. When the system lags, it allows glucose to build up in the bloodstream, which can lead to diabetes. When it runs in overdrive, it can allow cancerous cells to rapidly devour the nutrients that feed tumour growth.

The discovery: A protein that lets the cell know when it’s time to grow, and a key player in the spread of cancer
Winner: Prof. Michael N. Hall, University of Basel, Basel, Switzerland
Brightcove player

In 1989, scientists were curious about rapamycin, a drug first isolated in Montreal that was proving effective in suppressing the immune system and preventing the rejection of donated organs. What no one understood was how it worked. Michael Hall and his team recalled that rapamycin – as its name suggests – had originally been discovered in a soil sample from Rapa Nui (Easter Island), where it is generated by microbes as a way to attack fungus. So they turned to yeast cells, which are fungal and easier to work with than human cells. Eventually they were able to piece together a complex set of interactions that rapamycin disrupts. In the process they discovered the “target of rapamycin,” or TOR, a protein they knew lay at the heart of the system.

The big surprise came later, when TOR proved to be the central controller in charge of cell growth and size – something that researchers previously thought happened passively depending on available resources. When you build up your muscles by exercising, or when your brain forms new connections to facilitate learning, cells are growing and TOR is at work. The key question, says Hall, is “what is TOR doing when it goes bad?” In part the answer is that a faulty TOR system can prompt cancer cells to metastasize. Ongoing research points to new strategies for tackling cancer and a variety of metabolic diseases.

City dwellers must recycle, and so too must cells. But for cells, recycling is a matter of survival. When nutrients are scarce, the cell has a system for breaking down old or unneeded machinery and harvesting the parts to keep itself going. The system, known as autophagy – literally “self-eating” – involves isolating the material slated for recycling inside a little bubble called an autophagosome. The bubble migrates over to and merges with a lysosome, one of the cells’ recycling centres, where enzymes break large molecular components down into their constituent parts, ready for repurposing.

Starting in 1988, Yoshinori Ohsumi was the first to observe and describe this key cell function after detecting it in yeast cells. The system is so dynamic that understanding its operation was not easy, he says, but years of experience with the techniques of microscopy allowed him not only to see autophagy in action, but to identify mutant cells where it was defective. This, in turn, allowed him to discover the genes that are essential for autophagy and the molecular machinery that runs the process.

Ohsumi refers to himself as “just a basic researcher in yeast,” yet his discovery is widely recognized as fundamental to human cell survival, and autophagy has been implicated in Alzheimer’s disease. “I believe its relevance to many diseases will be discovered in the near future,” he says.

The discovery: A watchdog that keeps bad information from derailing cells and provides a window on the causes of genetically based disease
Winner: Dr. Lynne Maquat, director, Center for RNA Biology, University of Rochester, Rochester, N.Y.
Brightcove player

Every cell needs instructions to function, survive and even die at the right time. Those instructions come from a master library – the cell’s DNA – where they can be copied onto long, stringy molecules called messenger RNA and then sent out to make the proteins that are the basic components of all cell activity. The problem is that sometimes the instructions are wrong.

“All cells make mistakes,” says Lynne Maquat, who discovered that cells have a mechanism for identifying and eliminating the bearers of bad instructions, which are called nonsense messenger RNA.

Maquat says she was originally motivated to understand how problems with protein production lead to a wide range of diseases, from cystic fibrosis to many forms of cancer. In the 1980s she began to explore that question, leading her and her colleagues over the next three decades to discover a crucial quality-control system in the cell. Because nonsense messages often originate from disease-causing genetic mutations in DNA, the discovery can help better pin down the precise cause of disease and point the way toward future treatments.

The discovery: A type of cell that balances the immune system and keeps the body from attacking itself
Winner: Dr. Shimon Sakaguchi, vice-director, Laboratory of Experimental Immunology, Osaka University, Osaka, Japan
Brightcove player

To build a healthy organism, cells must work together and specialize, and among the most specialized of all are T cells, the immune system’s defenders against infection. T cells work by producing destructive enzymes that break down infectious agents. When T cells fail to recognize the difference between the invaders and healthy tissue, the result is autoimmune disease.

It was a quest to understand and treat autoimmune disease that inspired Shimon Sakaguchi when he graduated from medical school. He was drawn to the scientific challenge, he says, and to the “philosophical flavour” of the underlying question: How do cells distinguish self from non-self?

Working with mice in the early 1980s, Sakaguchi was able to demonstrate the existence of a new type of T cell, produced in the thymus gland, whose purpose was to ramp down the immune response and prevent autoimmune disease in the aftermath of an infection. Called regulatory T cells, they have now been shown to provide a crucial balance in the immune system – a balance that can be adjusted in one direction to help treat conditions such as inflammatory bowel disease, or in another to invigorate the immune system when fighting the growth and spread of cancer.