A potentially historic clinical trial for a stroke drug will begin rolling out in ambulances in Ontario's Peel Region this week.

Beginning Monday, emergency medical services will administer the Canadian-made drug NA-1 – or a placebo – in a double-blind experiment that will involve 558 patients across Peel, Toronto and Vancouver.

It is hoped NA-1 can contain the toxic damage wrought by a stroke, which would significantly improve the quality of life for a patient. It also represents a high-stakes risk for a small but focused Canadian company that is edging ever closer to succeeding in a field where many of the world's largest pharmaceutical companies have failed.

Called FRONTIER, the Phase III trial aims to reduce the effect of this country's third-leading cause of death. EMS teams will administer the drug before the stroke's swift devastation burns through the brain.

NA-1 was discovered by NoNO, a private company that raised $30-million and also won a $6.6-million grant from Brain Canada. It is a neuroprotectant, a class of stroke medication that nearly every major pharmaceutical company has tried to launch and failed. NoNO is confident that it has addressed the blind spots that beset other neuroprotectants and that FRONTIER will be able to curb the effects of stroke with greater dispatch than its unsuccessful predecessors.

"I've never worked so hard on getting a randomized test like this going," said Sheldon Cheskes, the medical director at Sunnybrook Osler Centre for pre-hospital care who has provided medical oversight for Peel and Halton EMS for the past 25 years. "This is a great story."

He added archly: "I hope the drugs work."

The emergency teams that Dr. Cheskes oversees will administer NA-1 or a placebo. Before administering the drug, the paramedics will consult by phone with a physician investigator who will confirm a patient's eligibility and dosage. Within 24 hours, research staff will seek bedside permission from the patient or the patient's relatives to continue to participate in the study.

NA-1 thus far has proven to be safe and effective. In previous trials, the intravenous drug demonstrated positive results and did not have any serious side effects on people.

There are two layers to FRONTIER's emergency process. A paramedic will be equipped with the provincial health tool that determines whether a stroke has taken place. The result will determine whether the patient will be rushed to the nearest hospital stroke centre. If positive, the paramedic will call FRONTIER's emergency physician or neurologist to see whether the patient is eligible to be randomized.

FRONTIER is modelled after FASTMAG, a Phase III trial for a stroke drug that attempted to reach patients on their doorstep within an hour of the event. Neurologists call this window the "golden hour": Ideally, no more than 60 minutes should pass between the onset of a patient's stroke symptoms and treatment.

Launched in the Los Angeles area, FASTMAG used magnesium sulphate, which dilates blood vessels in the brains of animals, expanding the area to allow more blood to flow through. Announced last year, the results were neutral, but the exercise was nonetheless instructive.

"FASTMAG was good process, wrong drug," said Dr. Cheskes, who oversaw the training of more than 500 Peel paramedics for the trial. "We're hoping this will be good process, good drug."

FRONTIER was supposed to hit the road in January, but small, unforeseen obstacles have delayed the roll-out. Clinical trials typically include bureaucratic tangles involving ethics board approvals, trial agreements and data-sharing agreements, which allow access to medical records. Usually trials take around 18 months or so to launch. This trial has taken one-third of that time.

For Dr. Cheskes, however, the great challenge has been training. For example, a neurologist on the other end of line is unaccustomed to evaluating patients in real time. Neurologists are used to talking to other physicians, not paramedics. "Physicians like to see the patient in front of them," said Dr. Cheskes. "Now they're relying on the expertise of the person in the field."

On a more mundane level, refrigerators were a problem, too. FRONTIER uses small refrigerators that keep NA-1 cool. As several people involved in the program explain, however, the appliances can't be treated like a toaster on a kitchen counter. First of all, they need to be secure; paramedics can't have them flying around the back of an emergency vehicle.

Even their electrical source proved to be a hiccup. Ambulances in the three regions all have different specs. Peel Region has four batteries, for example, and Toronto has three, so the investigative team had to install backup power for the Toronto EMS ambulances.

The final results will emerge in two years, said Laurie Morrison, who is up heading the trial. Its completion would mark two full decades since the NA-1 project began, but it could end a little earlier.

"It's better to under-promise and over-deliver than the other way around," said Dr. Morrison, the Robert and Dorothy Pitts Chair in Acute Care and Emergency Medicine at Toronto's St. Michael's Hospital. "If that happens, the hospitals and the ethics boards will say, 'Wow, these people know what they're doing.'"

Editor's note: In an upcoming clinical trial, 558 patients will receive either the stroke drug NA-1 or a placebo in Peel Region, Toronto and Vancouver. A previous version suggested the trial reached 558 patients in Peel only. 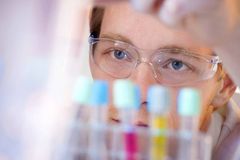