Too many Canadian women are having children with preventable birth defects or are forced to terminate pregnancies because they were taking an acne medication well known to cause severe problems to fetuses, a new study has found.

Canada has a program to help women prescribed isotretinoin, better known under the brand name Accutane, avoid pregnancy. Despite this, less than one-third of women taking isotretinoin received prescriptions for birth control while taking the drug, according to a study published Monday in the Canadian Medical Association Journal.

The researchers estimate that one to two children are born in Canada every year with preventable birth defects as a result of isotretinoin treatment. Ontario has the highest rates of pregnancy among women taking the drug, with the vast majority – 90 per cent – also receiving social assistance at the time. Researchers have long known that lower socioeconomic backgrounds are linked to a heightened risk of health problems.

The findings suggest doctors are not doing enough to warn patients of the risks of isotretinoin, and that too many women are not educated on the potential dangers of the acne drug, the study authors conclude. Dr. Brandace Winquist, research consultant to the Saskatchewan Health Quality Council and co-author of the study, said the findings regarding socioeconomic factors made the researchers question "the appropriateness of the materials shared with this population as well as the ability to afford contraceptives and reliably use them well."

The U.S. has a registry of women taking isotretinoin to help avoid the risks associated with pregnancy. The registry includes informed consent, counselling about the risks of the drug and required pregnancy tests. Only those doctors and pharmacists registered with the program can prescribe isotretinoin.

But Canada decided it doesn't need to implement a similar program. In a 2005 statement, the Canadian Dermatology Association said many dermatologists agree with this decision, "citing the increased paperwork and inconvenience for patients, physicians, and pharmacists, not to mention the patients who could be denied a potentially helpful medication, which in turn could have serious psychosocial consequences."

Canada has a prevention program in place that requires informed written consent and two negative pregnancy tests before starting the acne drug.

The drug has been on the market in Canada since 1983. It's been well known for several decades that the drug causes birth defects, including brain, heart and facial deformities.

The study was done at the request of Health Canada. The department did not immediately respond to a request for information about what it plans to do with the findings.

To conduct the study, the researchers looked at health data for female patients between 12 and 48 who were prescribed isotretinoin from 1996 to 2011 in British Columbia, Saskatchewan, Manitoba and Ontario. Because of the challenges of tracking all pregnancies and outcomes using only retrospective administrative data, the researchers created two categories for their results: a narrow category that only included women taking isotretinoin who also experienced a miscarriage, abortion, live birth, still birth or other pregnancy outcome.

The broader definition tried to capture women on isotretinoin who may have experienced early pregnancy loss or who completed their pregnancy outside of a hospital or their home province.

Based on the narrow definition, researchers found there were 186 pregnancies during isotretinoin treatment, which works out to three out of every 1,000 women taking isotretinoin. By 42 weeks after treatment, the number of pregnancies rose to 1,473. Of those, 90 per cent ended in miscarriage or abortion. There were 118 live births and, of those, nearly 10 per cent of the babies were born with birth defects.

Under the broader definition, there were 367 pregnancies, or 6.2 per 1,000 patients on the acne drug. 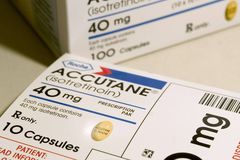 Accutane linked to severe skin disorders, Health Canada warns
May 2, 2018
Follow Carly Weeks on Twitter @carlyweeks
Report an error Editorial code of conduct
Due to technical reasons, we have temporarily removed commenting from our articles. We hope to have this fixed soon. Thank you for your patience. If you are looking to give feedback on our new site, please send it along to feedback@globeandmail.com. If you want to write a letter to the editor, please forward to letters@globeandmail.com.
Comments