Some First Nations communities in Ontario have complained for years about what they call an unusually high rate of cancer among their members. Now a new study, funded by Health Canada and conducted by a group of University of Toronto researchers, will look into those claims.

The research will focus on the Northwest Angle 33 First Nation – near the borders of Manitoba and the U.S. – which claims that a quarter of the residents on the reserve have been diagnosed with cancer over the past few decades.

Some band members believe carcinogens could be leaching from scores of black spruce logs that were piled into their water source over the years before being hauled to a now-defunct pulp and paper mill in Kenora, Ont.

Lead researcher Prof. Howard Hu, of the Waakebiness-Bryce Institute for Indigenous Health, said scientists have no preliminary estimates on what the cancer rate is or what could be causing it, but that his team will look into environmental, genetic and lifestyle components.

Hu said there are examples around the world of environmental exposures to carcinogens, which is the technical term for substances that can cause cancer, being responsible for elevated rates of cancer.

"We intend to examine those kinds of possibilities," he said.

Seven other Anishinabe First Nations within the same radius have similar concerns about the prevalence of cancer and are asking to be part of the study.

They include the Grassy Narrows and White Dog First Nations, which were devastated by mercury poisoning starting in the 1960s when a local paper mill began dumping toxins into one of their key water supplies, and Shoal Lake 40, which has been without clean running water for almost 20 years.

Hu said the institute is looking at expanding its research to include some or all of the interested bands, depending on how far the government funding can be stretched.

A statement from Health Canada said it is providing $200,000 for the investigation into what it calls "perceived elevated cancer rates" to take place over two to three years.

Lance Sandy Sr., a commercial fisherman who has lived in a Northwest Angle 33 reserve for most of his life, said he has watched numerous people suffer from cancer, including his father, two uncles, sister, brother and two grandparents. When his grandmother died, he said, doctors found a 25-kilogram tumour growing inside of her.

"When you have that many people getting cancer, it kind of makes you wonder," he said.

"Most people who have cancer have lived here their whole life, or a large portion in their early life. … It's usually around the stomach area, like the colon or bowel. Some people have gotten spinal cancer close to their tailbone area."

The 50-year-old former tribal chief said his story isn't unusual within his community, which used to be home to more than 100 on-reserve members but has since dwindled down to about 20 because of people moving away or dying.

Sandy Sr. said he has been researching possible environmental causes of the disease since 1995, when he stumbled across information at a Winnipeg library about methyl mercury being traced to black spruce trees submerged in flooded areas.

"We've had like hundreds and thousands of cords of black spruce piled on our body of water for more than 40 years," he said about the shallow Lake of the Woods inlet where the band gets water and fish.

The reserve doesn't have a communal water system – some houses are connected to a UV purification system, but it doesn't produce enough for everyone. Other houses have wells, and some don't have running water at all.

Chief Darlene Ross said the First Nation's leadership has been asking for a study for about five years.

"I think we need to identity, could it be the logging that occurred? Could it be (emissions) from the hydro transformers that were just built in the community? Or could it be the plants, or food or fish?" she said.

Joe Barnes, the executive director of the social services organization Kenora Chiefs Advisory, said he knows area First Nations have a problem with high cancer rates but he doesn't know how severe the issue is because there are currently no accurate available data.

His group represents all eight nations that want to take part in the study.

"I don't like to speculate, so that's why we have a group of specialists that are actually going to identify what the cause could be," Barnes said.

"When they tell us what the problem is, then we'll find a way to address it."

Hu said he wants to make sure everybody's expectations are realistic because the funding provided so far is not enough for his crew – which includes representatives from Cancer Care Ontario, Environment Canada and Public Health Ontario – to do physical exams and laboratory tests.

How exercise can deter disease such as dementia and cancer
July 23, 2015 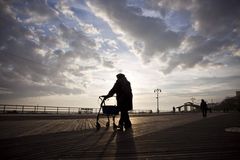