When it comes to treating Clostridium difficile with a fecal transplant – yes, human poop – swallowing a frozen capsule appears to have far less of an "ick factor" and works as well as delivering the therapy via colonoscopy, researchers say.

A study led by the University of Alberta and published Tuesday in the Journal of the American Medical Association found that both methods resulted in a 96 per cent success rate in treating C. difficile.

C. difficile is a debilitating and potentially fatal infection of the gut marked by severe diarrhea and abdominal pain that can be notoriously difficult to eradicate.

Gastroenterologist Dr. Dina Kao, who led the study, said taking antibiotics for another condition can cause "collateral damage" by wiping out good bacteria in the gut, allowing C. difficile to flourish in those exposed to the bug.

Not only did the tasteless and odourless pills work as well as the colonoscopy method, but patients' acceptance of them was extremely high, she said. As well, the capsules have many advantages over colonoscopy – they are non-invasive, less expensive and can be administered in a doctor's office without the patient being sedated.

Colonoscopies also carry a risk of bowel perforation, as well as heart attack or stroke in older patients with cardiovascular disease, Kao said Tuesday from Edmonton.

"From a health-care perspective, I think it becomes a no-brainer. Why would we be delivering a transplant by any other route?"

To conduct the study, researchers randomized 116 adults with at least three recurrent C. difficile infections to receive a fecal microbiota transplant, or FMT, in either capsule form or via infusion into the large bowel during a colonoscopy. Fecal matter from donors is first refined and then frozen.

The 57 patients in the capsule group took an average of 40 pills over the course of 30 to 60 minutes at an out-patient clinic. The 59 in the other group had a colonoscopy, a hospital procedure that requires heavy sedation and a day to fully recover.

Karen Shandro, 55, had three recurrent C. diff infections over a two-month period in 2015 after taking an antibiotic for a sinus infection, followed by two rounds of a stronger antibiotic aimed at treating the intestinal infection.

"I was spiralling downward every day," said Shandro, 55, of Ardrossan, Alta., just east of Edmonton.

"I felt I couldn't go out and about. I felt almost trapped in my own home because I always needed bathroom facilities," she said, describing the diarrhea as severe and coming on suddenly "like a light switch."

Fatigued, with no appetite and stricken by fever, her condition got so bad one day – she had 20 bouts of diarrhea in a 24-hour period – her husband called an ambulance to take her to the local hospital's emergency department.

Shandro was subsequently enrolled in Kao's clinical trial and ended up randomized to the capsule group.

After taking the pills at the clinic and going home to sleep, "I woke up about four or five hours later and I was starving," she said.

"And that was something new to me, because that feeling of being hungry had dissipated in that two months," said Shandro, who had lost about 10 pounds due to the infection.

Within a few days, she was on "an upward swing" and has felt well ever since.

Kao believes administering FMT using capsules, a delivery mode developed by Dr. Thomas Louie of the University of Calgary, could help broaden the use of fecal transplants for treating C. difficile.

"This will transform the way people think about how we deliver fecal microbiota transplant," she said, noting that using the capsules instead of colonoscopy could save the health system at least $1,000 per patient. 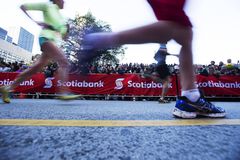 Fatty liver linked to a shrinking brain, researchers say
November 23, 2017
Drinking three cups of coffee a day tied to health benefits: study
November 23, 2017
Report an error
Due to technical reasons, we have temporarily removed commenting from our articles. We hope to have this fixed soon. Thank you for your patience. If you are looking to give feedback on our new site, please send it along to feedback@globeandmail.com. If you want to write a letter to the editor, please forward to letters@globeandmail.com.
Comments