It was an average night at the Maharaj household in Calgary: Two-year-old Jaden was begging his exhausted dad, Jason, for attention.

But then Jaden bit him on the back, which triggered an out-of-character outburst.

"I jumped up and turned around and yelled at him," the usually mild-mannered Mr. Maharaj, 36, recalls. Jaden, terrified, buried his face in the couch. But it was Mr. Maharaj who was even more shocked by the eruption. He'd reached his breaking point.

"I went for a drive and completely broke down for about half an hour, 45 minutes. I went to my parents' house and cried with my mom there for a while. I said, 'Nobody understands,' " he says.

For months, Mr. Maharaj had felt exhausted, stressed, and in a rut. He was battling undiagnosed postpartum depression - a mental illness that is normally associated with new mothers.

But it is also common in fathers, though not widely accepted in the mainstream, according to a report in the Journal of the American Medical Association.

The meta-analysis of 43 studies on the subject, published Tuesday, suggests 10 per cent of men suffer from prenatal and postpartum depression.

One of the most significant findings is that men whose partners have experienced postpartum depression are at heightened risk to develop it themselves, says lead author James Paulson, assistant professor of pediatrics at Eastern Virginia Medical School in Norfolk, Va.

"When one partner becomes depressed, that causes stress and strain on the relationship," he explains. It can affect how intimate they are with each other, how they handle household tasks, and trigger arguments.

Mr. Maharaj's wife had complications in her pregnancy and when Jaden was born fell into severe postpartum depression. After she returned to work following her maternity leave, she struggled with her multiple roles and was hospitalized for a few months, Mr. Maharaj says. He was saddled with taking care of his wife, his son and working.

But Mr. Maharaj sat on his feelings of stress, anger and resentment for months. He felt guilty about them.

"The answer I got from the counsellor was, 'Now is not the time for you. Now is the time to take care of your wife.' "

"There is a cultural myth that men don't get depressed," says Will Courtenay, a psychotherapist in San Francisco who has researched and written about postpartum depression in fathers. "Because there isn't any public discussion about it, most men don't know to identify what they're going through as being depression."

The meta-analysis found that fathers experienced the highest rates of sleep deprivation three to six months postpartum. Sleep deprivation, one of the leading contributors to postpartum depression, accrues over the first few months and its negative effects often set in after that three-month period, Dr. Courtenay says.

While little research has been done on the subject, he also suggests men's hormone levels change after the birth of a child. Their testosterone levels drop and estrogen rises, which can greatly affect their mood.

Symptoms of postpartum in men can be different from those seen in women. While many women with postpartum depression complain of exhaustion, men often exhibit aggression and violence, and adopt impulsive behaviour such as gambling, taking on extra-marital affairs and abusing drugs and alcohol, he says.

Chris Hale, who lives in Bogart, Ga., felt "emotionless" when his daughter was born four years ago. He used marijuana to escape from his anxiety.

The 37-year-old's postpartum depression, which he says was largely triggered by his wife's struggle with the same illness, went undiagnosed for months. The lowest point he can remember was when his wife called him at work one day and asked him come home because she was afraid she'd hurt their daughter.

"I'm supposed to be strong for my family. I thought I needed to be there and take care of them instead of myself at the time," he says.

"I was high more often than I was sober," he recalls. He later went to see a doctor and began taking antidepressants, which, after a few weeks, greatly improved his mental health.

Dr. Courtenay says because men can have smaller social networks than women, they struggle to find support among friends and family when they have a mental illness.

Mark Bentley, a 40-year-old Calgarian, says he was reluctant to tell his wife about his postpartum depression after the birth of their daughter because she was dealing with the same illness at the time.

"She felt bad enough because she knew she wasn't doing everything she thought she should be doing, so I couldn't lean on her," he says.

Save for breastfeeding, he took on all child-rearing responsibilities at home, which exhausted him.

When his wife's depression got so bad that mental-health workers recommended institutionalizing her, Mr. Bentley decided to keep mum about his own struggles, for fear of what would happen to his family.

Mr. Maharaj says there have been times when he's felt guilty about leaving his son in the care of his parents so he could take care of himself and his wife.

"You had a feeling that he blames you," he says.

Dr. Paulson points to a study of British children that found they had much higher rates of behavioural and psychiatric problems if their fathers were depressed.

"There's a concerning trend where father's depression is linked to poor childhood outcomes," he says.

In December, Mr. Maharaj started counselling and was prescribed an antidepressant. He says he's better able to cope now than he was a few months ago, but a big barrier to treatment is that postpartum depression is still widely seen as a woman's illness.

"Unfortunately, men don't talk about feelings. Even my close friends who I know have had difficulty and problems with it, will not open up," he says. "You've gotta figure things out on your own."

Parent PTSD: experts say it's healthier to acknowledge the accidents - and deal with them
January 17, 2010
Sorry, guys, testosterone may not help your aging body
June 16, 2010
Getting through post-partum depression
April 14, 2009
A condition hard to understand: post-adoption depression
June 9, 2009 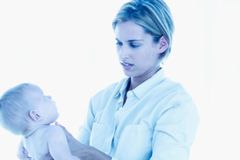 Procedures for delivering babies vary markedly across Canada
May 18, 2010
Follow Dakshana Bascaramurty on Twitter @DakGlobe
Report an error Editorial code of conduct
Due to technical reasons, we have temporarily removed commenting from our articles. We hope to have this fixed soon. Thank you for your patience. If you are looking to give feedback on our new site, please send it along to feedback@globeandmail.com. If you want to write a letter to the editor, please forward to letters@globeandmail.com.
Comments