Try as she might, Patricia Morrisroe couldn't sleep. So the New York writer decided to become an expert on her sleep disorder. Her quest for a solid night of shut-eye involved sleep labs, hypnotherapists, psychiatrists, pharmaceuticals, mattress shopping, and a chilly stay at Sweden's famous Icehotel. She documented her research in the new book Wide Awake: A Memoir of Insomnia.

It seems sleep should be the most natural thing in the world; if you're tired, you sleep. How do you describe what it's like to suffer from insomnia?

It's a lack of control. It's not as though you can get into bed and have a respite. It's always the possibility that you're going to be waking up in the middle of the night, and all the thoughts from the day can invade you. So it's almost as though there's no end of the day.

At the sleep lab where you were monitored for a night, you were told your sleep patterns are abnormal, that you don't reach a deep sleep stage.

Well, they're only abnormal in that I was in an abnormal situation in a lab. I mean, that's the ridiculous thing. I'm very, very sensitive to my environment. There was no way I was going to sleep in that crummy sleep lab. It was depressing staying on a floor of a seemingly vacant hospital. There was the sleep technician right outside the door, who said to me, "If in the middle of the night, the wires and things come unattached, I'll come into your room and reattach them." They did come unattached, and I was awake, so it really didn't matter.

But that pattern bore no relationship to the way I sleep whatsoever. So to my mind, it was utterly useless.

One of the big questions you raise is: We spend tens of billions of dollars a year on products and services related to sleep, but are we throwing our money away?

I think in some instances we are. There's no coincidence that the focus on sleep really started in the early 1990s when [pharmaceutical company]Searle came out with the sleeping drug Ambien. Searle teamed up with the National Sleep Foundation and another public relations agency to do this poll, "Sleep in America." And all of a sudden, the focus was on how Americans are sleeping, how "we're not getting enough sleep," and so forth. And there really was not a lot of hardcore evidence that we were sleeping any less than we were previously.

Clinical trials show that sleeping pills only keep people asleep overall during the night for 11 minutes. That's not a lot. They can also interfere with memory formation, so sometimes you may think you've been sleeping better than you did, but you just don't remember you were awake.

I think they can be for elderly people. The night of my book party in New York, my mother, who I mention in the book and has insomnia - she's almost 90, she woke up, having taken an Ambien, and fell and really injured her shoulder.

I have broken my toe twice when I've taken Ambien.

I think different people have different sleep needs and patterns.

We think of sleep as the way Westerners sleep. Carol Worthman, an anthropologist at Emory University, says it's the "lie down and die" model, where you get into bed and that's it for eight hours.

She's done some research into traditional, non-Western societies and for them, sleep is much more fluid. They sleep when they're bored or they're tired. Or something exciting's happening and it may be 3 a.m., but they'll be up. So I think we aren't made necessarily to sleep in a solid block.

What did you learn about sleep at the Icehotel?

I learned that there was no way I could sleep on an ice bed. … But on Christmas, my husband and I went on this sleigh ride and I was interested in speaking with our Sami guide - Sami are the aboriginal people of Lapland - about what it's like to sleep during the polar nights and the midnight sun. And he told me - it sounds almost cliché but - the idea of keeping with nature. For them, if it's dark most of the day, you sleep 10 hours. During the midnight sun when it's bright, maybe you sleep five hours.

A bizarre area of sleep research that you touch on is disorders of arousal. Can you explain?

When I first decided to do this book, it was 2006 and what was in the news tremendously were all these people who had been taking Ambien and would wake up in the middle of the night. They'd go into their refrigerator and would grab these pieces of meat and be eating it like grizzly bears or they'd wake up with potato chips all over their beds. Ambien had somehow triggered that, but also a lot of these people were prone to being sleepwalkers, which is very common when you're younger. Or you can have REM disorder, when people act out their dreams.

Then there's the whole issue of sexsomnia, where people have sex with their partners and they don't remember it later. A lot of strange stuff happens.

Did any of the experts actually give you a good explanation for why you weren't sleeping?

You know, the psychoanalyst will say I wake up in the middle of the night because I want to REM-deprive myself; I'm afraid of my dreams. A cognitive behavioural therapist might say I'm watching TV in the bedroom, so I'm not associating my bed simply with sleep and sex. Everybody sees it through their own specialty.

How has meditation finally helped you?

It did help my sleep a lot. Having said that, is meditation a [solution]if you have chronic insomnia? No. But I think meditation gave me a sense of control.

Ms. Morrisroe will be speaking at The Globe and Mail/Ben McNally Brunch on Sunday, June 13, at the King Edward Hotel in Toronto.

An extra hour of sleep isn't all good news for your body clock
November 3, 2010 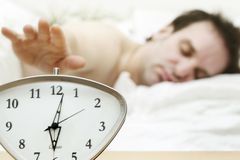