Canadians of all ages are heavier, bigger-bellied, weaker and, by every conceivable measure, less fit than they were a generation ago, according to grim new data from Statistics Canada.

The first comprehensive, directly measured look at the fatness and fitness of Canadians in decades reveals that between 1981 and 2009, the average weight of a 45-year-old man ballooned by 20 pounds and his waist size swelled by almost three inches. The average 45-year-old woman is carrying an extra 12 pounds and three unwelcome inches have been added to her waist.

In fact, for Canadians, being overweight - meaning 25 per cent or more of their body weight is fat - is now the norm by age 36.

All told, 61 per cent of adults are considered to be overweight or obese, according to a pair of studies published in Health Reports.

Children and youth are faring no better, data collected in the Canadian Health Measures Survey show.

The average 12-year-old boy is a whopping 14 pounds heavier today than in 1981 (albeit two inches taller, too), and girls are 11 pounds heavier (and one inch taller).

About 26 per cent of children aged 6 to 11 are overweight or obese, and that number rises to 28 per cent in the teens.

In adults and children alike, tests used to gauge aerobic and muscular fitness such as sit-ups, step-ups and grip strength showed marked declines. But the changes were more pronounced in the Nintendo generation, to the point where one in seven children couldn't even do some of the tests because they were so unfit.

"There is a dramatic deterioration in the fitness of the Canadian population," said Mark Tremblay, director of healthy active living and obesity research at the Children's Hospital of Eastern Ontario in Ottawa, and lead author of the study.

While looking back is disheartening, he said, looking ahead is even more so because as people's girth grows, their desire and ability to be active declines.

"One can imagine a further downward spiral as we get heavier, weaker and less aerobically fit," he said.

Dr. Tremblay said urgent action is needed to get Canadians more physically active and slimmer, or we risk "mortgaging our children's future."

Measuring fitness and fatness in large populations is logistically challenging and expensive; most research depends on self-reported data, and people tend to overstate their activity and understate their weight.

The new Statistics Canada research involved more than 2,087 children and teens aged 6 to 19 and 3,102 adults aged 20 to 69, all of whom underwent a battery of anthropometric measurements and physical tests.

Kelly Murumets, president and CEO of ParticipACTION, the national fitness organization, said that while the findings were predictable generally, the data still paint a staggering picture.

"At ParticipACTION, we're quite aware that we have a physical inactivity crisis in this country, but the numbers still knocked my socks off," she said.

Ms. Murumets said she hopes the research will jolt leaders - in politics, education, business, sport, non-profits and elsewhere - into action.

"The problem is real but the solution is simple: We need to get people to move more," she said. "But we need to find a way to inspire Canadians on a grand scale."

Silken Laumann, a former Olympic rower who is now the kids' champion at the GoodLife Kids Foundation, also expressed hope that the research would be a wake-up call, particularly for parents.

"Parents need to understand that the fitness of their children today will have a profound effect on their health tomorrow," she said. "Parents today are hypervigilant about safety, about education and so on, but they're missing a giant piece of the puzzle - their kids need to be active to be healthy."

Ms. Laumann, who is also the author of a bestselling book, Child's Play: Rediscovering the Joy of Play in Our Families and Communities, places much of the blame for the health woes of today's youth squarely on "screen time" - the countless hours young people spend watching TV, on Facebook, or playing video games.

"We need to control screen time and get kids outside to play, or the situation is just going to get worse," she said.

Check out your latest vital sign: waist size
April 29, 2018
Fat Nation? A snapshot of Canadians getting fitter
May 2, 2018 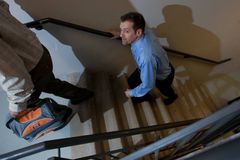 Are you fitter than the average Canadian?
May 2, 2018
Follow André Picard on Twitter @picardonhealth
Report an error
Due to technical reasons, we have temporarily removed commenting from our articles. We hope to have this fixed soon. Thank you for your patience. If you are looking to give feedback on our new site, please send it along to feedback@globeandmail.com. If you want to write a letter to the editor, please forward to letters@globeandmail.com.
Comments