Sarah Bezanson is feeling the burn. After years of wanting to get in shape but not doing much about it, the 27-year-old Grade 7 and 8 teacher who lives in Dartmouth, N.S., finally joined a gym in the fall of 2009.

Then, last March, she was rear-ended in a car accident that damaged the soft tissue in her back. Months of physiotherapy and rehab later, she decided that it was time to rejoin the gym and get a personal trainer.

Rather than lying on the couch watching television after work as she used to, Ms. Bezanson now opts for leg presses and curls. And she has never felt better.

The diet: "I've wanted to train and get in shape ever since I graduated from university. But when I started teaching, I had a job in rural Nova Scotia and the students I was teaching worked at the gym - that was a deterrent. I'm in Dartmouth now, so I'm anonymous. When I go to the gym, I don't have to see Patrick from Grade 10 English. Diabetes and high blood pressure run in my family, and I realized I had to start living healthier and take better care of myself. I joined a Good Life gym and had a health profile done. I'm an instructional cadre officer with the Cadets, I volunteer with the SPCA, I'm on committees at school. After my health profile, I was told that if I didn't change, I wouldn't be able to keep doing all those things. It was a real kick in the pants."

The biggest challenge: "Motivation. That's why I have a personal trainer. I know that if I didn't have somebody to be accountable to, to pump me up and get me going, to challenge me, I wouldn't work this hard. It's gratifying being able to rock a workout and come home and feel your muscles burn. I walk through the gym and the trainers are giving me high fives and they know me by name. It's just wicked."

The current plan: "I see my personal trainer two times a week and I train by myself twice a week. I do cardio and a build program. I blew through my build phase. As my trainer has so eloquently put it, I am a tank. As for food, I talked to my trainer and he said to make sure I eat five times a day - breakfast, snack, lunch, snack, supper. On my own, I've pretty much cut out all pop. I think I've only had about two cans since October. I eat well. And I do a food journal. Sometimes when I skip breakfast, I kind of kick myself and think, 'Oh, that's going to come back to bite me later.' It also makes you think about what you're putting into your body."

The goal: "I want to lose 40 pounds and get down to about 170 pounds. I'm down eight pounds since October. And Cadets has a fitness test next month that I want to rock because if I get to a certain fitness level, then I can qualify to go on international exchanges. I have a humongous travel bug. In the summers, Cadets get sent to England, to Australia, to Germany - all over the place. I want to be able to rock the fitness test so that not only can I qualify for those trips, but also to be a good example to my Cadets. The fitness test is push-ups, sit-ups, a shuttle run and a long jump as it stands now."

How it's going: "This is the best I've ever been. And I'm just starting. It's only January and it's already rocking my world. My dad calls it the kiss-my-ass attitude. I just feel like I can take on the world. It's amazing. My students notice too. I'll be in the hallways bopping around and they'll be like, 'It's Monday morning. What do you have in your coffee?" I just have tons of energy, and I teach middle school. I should be dead by the end of the day. Instead, I go to the gym. I sleep better. I feel better. I'm happier. Everything is working out." 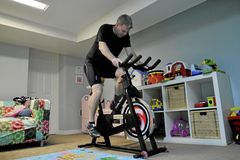 Skinny genes: How DNA shapes weight-loss success
January 17, 2011
Follow Dave McGinn on Twitter @Dave_McGinn
Report an error Editorial code of conduct
Due to technical reasons, we have temporarily removed commenting from our articles. We hope to have this fixed soon. Thank you for your patience. If you are looking to give feedback on our new site, please send it along to feedback@globeandmail.com. If you want to write a letter to the editor, please forward to letters@globeandmail.com.
Comments